Gallup's daily economic polling really "earned its bones" last year. The daily confidence numbers held up quite well before deteriorating slightly in June and then collapsing in July, bottoming in the beginning of August when the US's debt was downgraded. This showed that the debt ceiling debacle had a major impact on the public. Confidence has slowly returned and is now near a one year high.

In order to see if the collapse in confidence translated into a real change in consumer behavior, I tracked Gallup's daily consumer spending throughout the August-October period. It showed that consumer spending held up like a champ. Consumers may have lost faith in their government, but they continued to believe in their wallets. This data was the biggest single clue that ECRI's September call that a recession was imminent or may have already begun, was wrong.

So it is with no small concern that I report that YoY consumer spending as measured by Gallup's polling has turned negative YoY in the 14-day rolling average for 6 out of the last 7 days. Here's the graph: 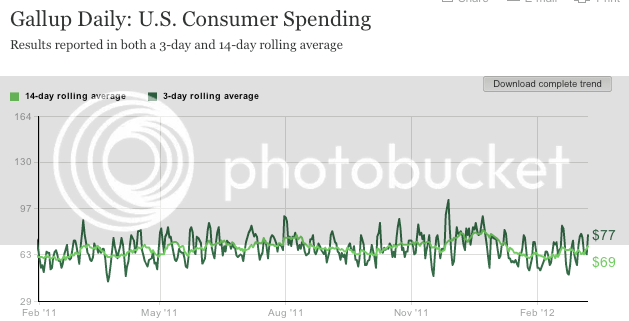 The 3 day average is very volatile, but one year ago the 14 day average had just climbed to $70. This data has to be looked at YoY because seasonality is so strong. Consumer spending ramps up for Christmas and for back-to-school. It eases off in September-October and again in January.

I don't want to over-sell this. YoY declines have briefly occurred several times during the recovery. In particular, consumers binged on Christmas spending in December 2010. The hangover was the next month, January 2011, when spending came in less than January 2010. Because of comparisons with that same binge, December 2011 was slightly weaker than December 2010.

This YoY negative comparison just started one week ago, and it could be that the non-winter winter pulled some spring spending forward into February (which would also mean that February was actually weaker than it looked). Nevertheless, this weakness occurs precisely at the time when we are on the lookout for gas prices to start to bite into consumer spending and so it raises yet another yellow flag, and only adds to the importance of tomorrow's February retail sales report.
Posted by New Deal democrat at 2:00:00 PM