Retail Sales and the Health of the US Consumer

When I last reviewed the US consumers position (early last week), I noted the following:


The good news in the above charts lies in the durable goods numbers, which show a consumer who is confident enough int the future to take on a big purchase.  However, the stalling of PCEs and near-stalling or retail sales for the four months is concerning and clearly needs to be watched over the next few months.

Yesterday's retail sales release helps to alleviate some of my concern.


Americans heartened by an improving labor market boosted spending at stores and malls by the most in five months, adding to signs that the world’s largest economy is gaining strength.

The 1.1 percent advance followed a 0.6 percent increase in January that was larger than previously estimated, according to Commerce Department data issued today in Washington. Sales rose in 11 of 13 categories, including auto dealers and clothing stores, showing gains in demand were broad based.
.....
“There are a number of factors that are helping release this pent-up demand,” Don Johnson, vice president of GM’s U.S. sales, said on a March 1 conference call with analysts. “They include stronger employment, good credit availability, and both of those are leading to improving consumer sentiment.”

Automobile stockpiles jumped by the most in more than a year in January, leading a 0.7 percent increase in business inventories, the Commerce Department said in a separate report today.
Retail sales excluding autos increased 0.9 percent in February, exceeding the median forecast of economists surveyed that called for a 0.7 percent gain.

As I noted before, the continued move higher in durable goods purchases is encouraging, as it indicates a certain level of confidence among consumers. 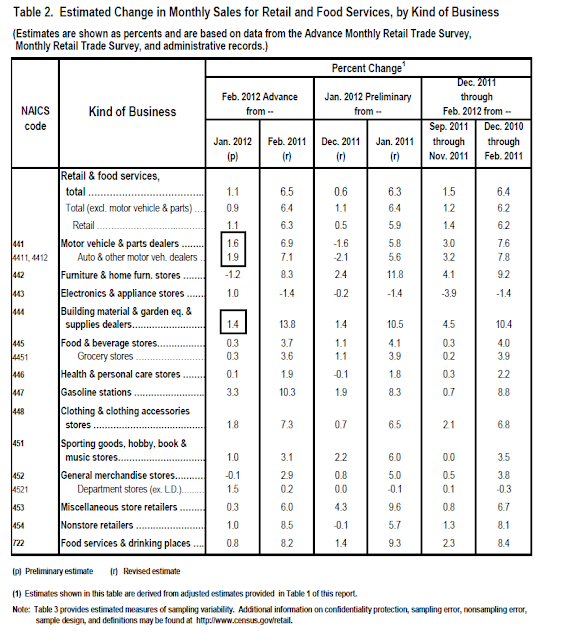 Overall, this report indicates the consumer is still buying things -- which is a very welcome bit of news.

The census report can be found here.