The BRIC Countries, Part I 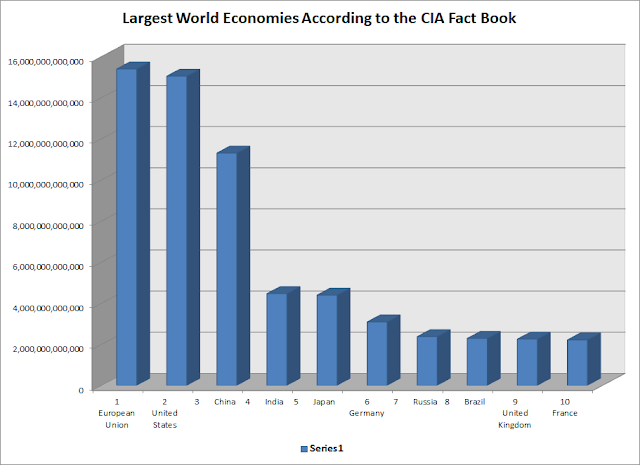 The above chart shows the 10 largest world economics according to the CIA World Fact Book.  Some of these numbers are from the end of last year, so some ranks could have changed (for example, I believe some ranking systems now have Brazil at 6).  However, you get the general idea.  More importantly, it puts the importance of the BRIC countries in perspective.  All four are on the list, and all four are considered hot markets.

More importantly, all four are incredibly important to the latest expansion -- a trend I first noted back in 2008:


As US consumer spending slows we will import less, thereby lowering the total amount of imports in the trade deficit formula. At the same time, Emerging economies have seen a growing middle class which will want to buy more goods and services. And some of those will come from the US

And as I've noted, the exports have been a key component of the latest expansion, as shown by this chart from the BEA: 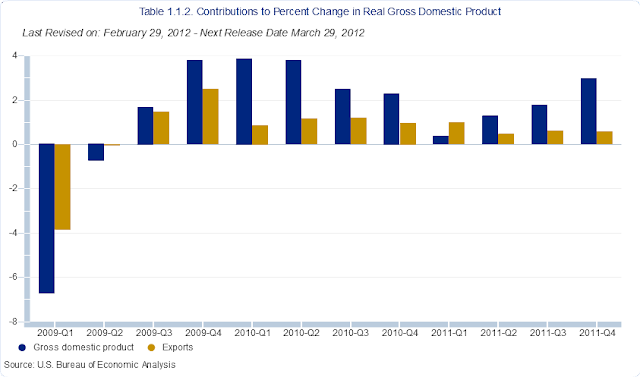 Early in the expansion, exports were a primary driver of growth.  In 2010, they were important contributors and in the first quarter of 2011 there were in fact a larger contributor than overall GDP.  Their significance has dropped off since than.

And this chart from the FRED system shows that exports are alive and well in the US: 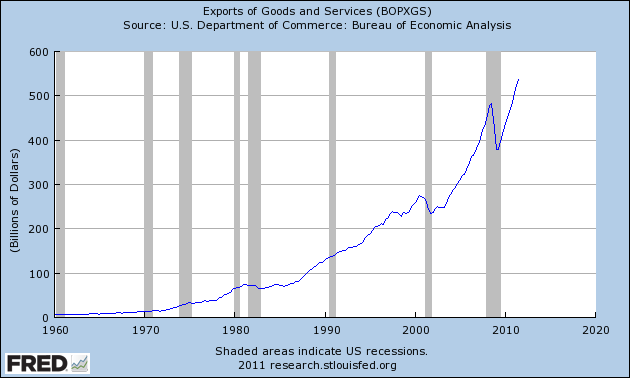 As the chart above shows, exports are clearly in a "v" shaped recovery.

In addition, non-OECD countries are more and more important to overall world growth: 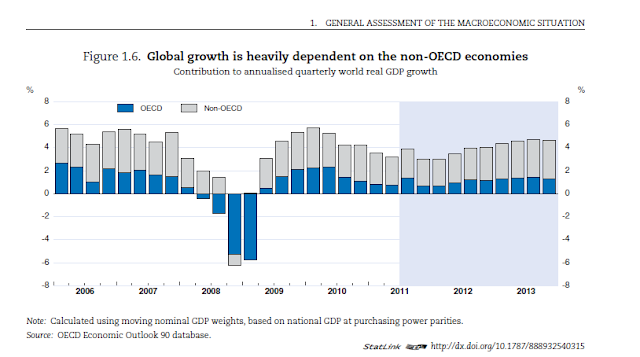 However, a recent WSJ article highlights that the BRIC economies are slowing:


Earlier this week, Brazil said its economy grew around 2.7% in 2011, less than half the rate the government predicted a year ago. And Wednesday, Brazil said industrial production fell 2.1% in January, the most since the 2008 crisis. Later, Brazil's central bank slashed its benchmark interest rate by three-quarters of a percentage point, a bigger cut than expected, to spur growth.
.....
Growth forecasts are falling across the developing world. On Monday, China's Premier Wen Jiabao reduced the country's annual growth target to 7.5% after keeping it at 8% since 2005. Last week, India said its economy grew 6.1% in the final quarter of 2011, its slowest pace in two years. Economists expect South Africa's growth to slow to 2.5% this year, a far cry from the 7% rate its central-bank governor, Gill Marcus, spoke of chasing just a year ago in order to dent high unemployment.

To be sure, most of the world's developing economies are still cruising faster than the U.S., Europe and Japan. Foreign investment in the regions is recovering, and rising commodity prices should help growth in resource-rich nations like mining giant South Africa and Brazil, a major exporter of iron ore, soy, beef and other goods.

"The emerging markets are still at the front of the train, but it's a slower-moving train," said Mohamed El-Erian, chief executive of Pacific Investment Management Co., which manages some $1.3 trillion in bonds
.....
India is also wrestling with the fallout from slower-than-predicted growth. Some analysts say it was caught off guard by its slowdown, which made expensive promises of social spending and fuel subsidies harder to afford. A year ago, India predicted it would notch 9% growth for the year ending March 2012, its fiscal year. Recently it cut the forecast to 7%.

The government will be hard pressed to pay for the subsidies without opening up wider budget deficits. But the government may be forced to go deeper into the red to fund more subsidy programs to maintain popularity.

This week, I'm going to take a macro-look at the four BRIC countries-- Brazil, Russian, India and China.  I'll be using information from the CIA World Fact Book, the Trading Economies Website, the OECD and World Bank.   The point is to develop a more in-depth knowledge of the various countries and hopefully carry that knowledge forward for future reference.