Karl Smith at Modeled Behavior yesterday wrote a couple of excellent posts wherein he divided the US workforce into two parts: (1) "goods and government" vs. (2) private service jobs. He pointed out that:

Goods and Government are what we might have thought about as backbone jobs. These are police officers, fire fighters, school teachers, factory workers, construction workers. When you think of a stereotypical 1950s American, they are doing one of these jobs.

He noted that it is this group - public employees, construction workers, and manufacturing workers - who have seen little or no improvement since the bottom of the recession. Here's his graph, showing the number of "goods and government" worker jobs in red (left scale), and private service jobs in blue (right scale): 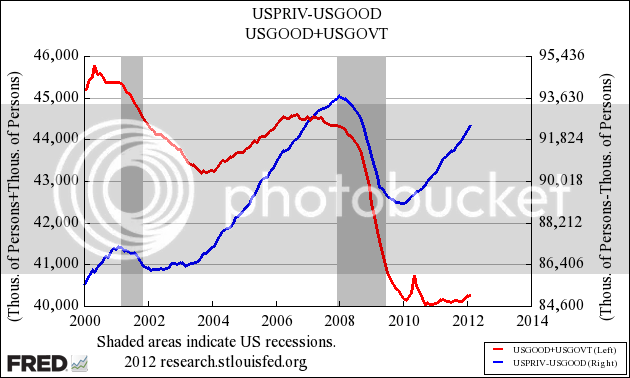 That got me thinking. One of the signature differences between the "Great Recession" and other post-WW2 recessions is how much it impacted private service jobs. To compare, here are the same two categories of jobs, "goods and government" (red) and private service jobs (blue) showing the relative impact of the two previous worst recessions since WW2 - 1974 and 1981-82 - on those categories, by showing the number of jobs in each gained or lost since their peaks just before the 1974 recession: 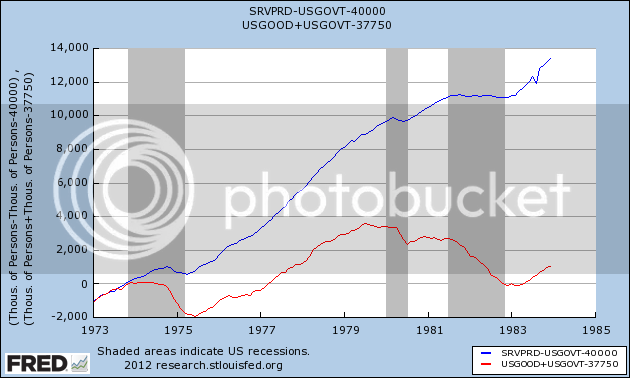 You can see that private service jobs were barely scratched in 1981,and actually increased during the 1974 recession!

Now let's look at job losses and recoveries for the two sectors in the Great Recession. The difference between this graph and Karl's is that both categories are shown on the same scale, and show the number of jobs lost since their respective peaks immediately prior to this recession: 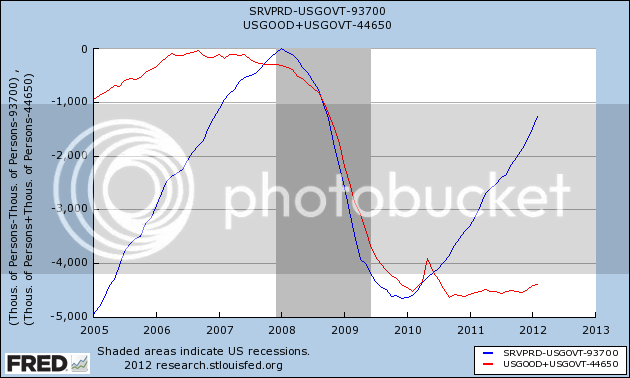 Virtually the entire 5,000,000+ continuing job losses are in manufacturing, construction, and government. Manufacturing has long-standing issues of automation and offshoring, and it can be debated how much of its long-term losses are due to each factor.

Construction and government job losses, however, are another matter entirely, reflecting a colossal and unnecessary waste due to ideological political failure. We need something like $3 trillion in infrasctructure repairs to bridges, sewer and water mains, and the electric grid. We have several million idle construction workers. And we could finance the infrastructure repairs that would make this country so much more competitive and pay for itself multiple times over (see, e.g., Erie Canal and interstate highway system) by issuing debt at 2% in the open market. Further, whatever one's opinion regarding government inefficiency, police officers, firefighters, and teachers are not by any stretch its primary source -- and yet those are the government workers who have been most impacted.

If it were not for this utterly unnecessary waste, we would not have to pay for so many food stamps, we would not have to fund so much extended unemployment compensation, we would have the benefit of the professional and constructed infrastructure, and there would be probably a million or more persons employed in Karl Smith's "backbone jobs." Those employees would be supporting their families, and paying withholding, property and income taxes, with all of the resulting positive multiplier effects throughout the economy.
Instead here we are, almost three years since the bottom of the recession, having made up less than half of the total jobs lost, tolerating a bifurcated jobs recovery.
Posted by New Deal democrat at 2:00:00 PM