Last week, we saw the release of the latest Fed minutes.  These provide a really god overview of the current US economic situation.


The unemployment rate dropped to 8.6 percent in November, and private nonfarm employment continued to increase moderately during the past two months. Nevertheless, employment at state and local governments declined further, and both long-duration unemployment and the share of workers employed part time for economic reasons remained elevated. Initial claims for unemployment insurance moved down, on net, since early November but were still at a level consistent with only modest employment gains, and indicators of job openings and businesses' hiring plans were little changed.

(I wrote this before the release of the last employment report, which NDD wrote about here.  This report did show an improving situation).  There are several points made above which are very important.  First, the continued bleeding of government jobs is a very negative issue for the employment situation, and is probably a reason for the continued high showing in the initial unemployment claims over the last year.  The continued high level of long-term unemployed, the high JOLTS survey and the high level of part-time for economic reasons employment tells us that while the bleeding has stopped, we're simply not creating enough jobs to pick-up the slack in the labor market.  I have a supply of graphs on this topic at this link.


Industrial production rose in October, reflecting in part a rebound in motor vehicle production from the effects of supply chain disruptions earlier in the year. Factory output outside of the motor vehicle sector also continued to rise, and the rate of manufacturing capacity utilization moved up. However, motor vehicle assemblies were scheduled to only edge higher, on balance, in the coming months, and broader indicators of manufacturing activity, such as the diffusion indexes of new orders from the national and regional manufacturing surveys, were at levels that suggested only modest increases in production in the near term.

Overall, manufacturing appears to be improving.  After a 6-8 month, mid-year lull, we're starting to see better numbers come from this sector.  However, it's important to remember that Europe is near a recession (if not already in one) and Asia is slowing (although it is still printing growth numbers).  In other words, we're not out of the woods yet.  And even if we see a strong performance from this sector, it's not large enough to pull the economy out of its current 0%-2% growth range into a higher rate of activity.


Revised estimates indicated that households' real disposable income declined in the second and third quarters, and the net wealth of households decreased in the third quarter. Nonetheless, overall real personal consumption expenditures (PCE) rose modestly in October following significant gains in the previous month, as spending for consumer goods continued to increase at a strong pace while outlays for consumer services were roughly flat. In November, nominal retail sales, excluding purchases at motor vehicle and parts outlets, expanded further, and sales of light motor vehicles stepped up. But consumer sentiment was still at a subdued level in early December despite some improvement in recent months

Overall, the consumer has been performing about how I thought he would perform in this "new economy" -- he's been spending, but at a historically lower rate.  However, the Fed noticed the basic problem with consumer spending right now: real DPI is declining, median incomes are stagnant and overall wealth has taken a hit.  This is to be expected when unemployment is 8.6% and has been at high levels for over two years.  However, to maintain current spending levels, consumers have had to start dipping into savings -- a process that can't last forever.


Activity in the housing market continued to be depressed by the substantial inventory of foreclosed and distressed properties and by weak demand that reflected tight credit conditions for mortgage loans and uncertainty about future home prices. Starts and permits for new single-family homes in October stayed around the low levels that prevailed since the middle of last year. Sales of new and existing homes remained slow in recent months, and home prices moved down further.

While new homes sales are still very low by historical standards, inventory levels are now in line with historical norms.  Existing home sales have been stable (at low levels) for the last few years, but inventory levels are still high, so we need more clearing out here.  What I find really interesting is that home prices have more or less stabilized.  Consider this chart of the Case Shiller home price index: 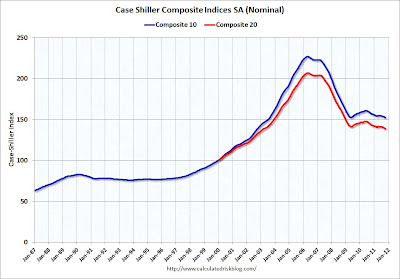 While there has been some bouncing around over the last few years around the 150 price level, there has not been a major crash through that level.


Real business spending on equipment and software seemed to be decelerating. Nominal orders and shipments of nondefense capital goods excluding aircraft edged down in October, and the slowing accumulation of unfilled orders suggested that increases in outlays for business equipment would be muted in subsequent months. Also, survey measures of business conditions and sentiment remained at relatively downbeat levels in November. Real business spending for nonresidential construction moved up in October but was still at a low level, reflecting high vacancy rates and restricted credit conditions for construction loans. Inventories in most industries looked to be reasonably well aligned with sales, although motor vehicle stocks continued to be lean.

There are two ways to look at this data: 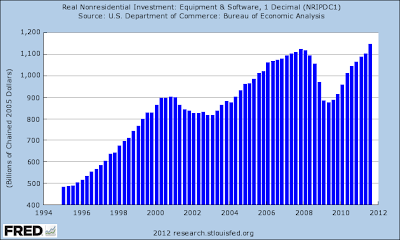 The total, real dollar amount of investment is now at higher levels than the height of the previous expansion.   However, 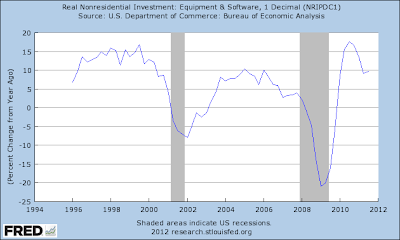 The YOY percentage change has been declining (although it's still a good levels).  Finally, 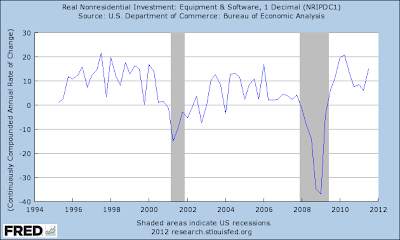 The continuously compounded annual rate of change is still good. 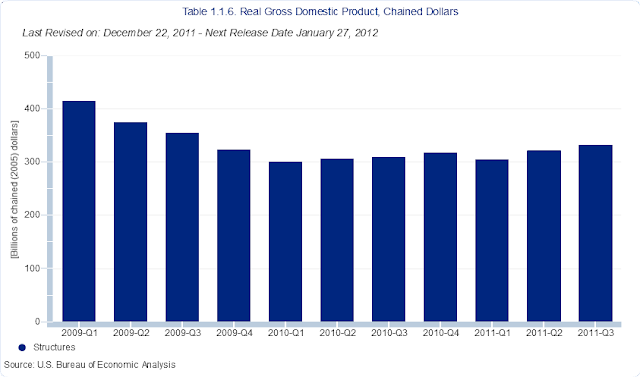 The above chart is the total, real amount of non-residential structure investment from the GDP report.  Notice is hasn't moved in any meaningful way for the last 2 1/2 years.  Like the residential market, we're just not seeing a big move in commercial real estate right now.


In the government sector, real federal defense purchases appeared to have stepped down in October and November from their level in the third quarter. At the state and local level, real purchases seemed to be decreasing at a slower pace in recent months than earlier in the year.

This is a huge problem -- the contraction in government spending.  Consider the following chart (which I've shown before): 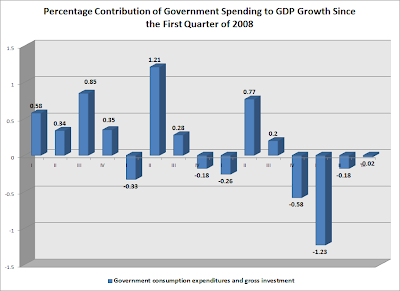 Austerity is in fact subtracting from overall economic growth.  For anyone that knows anything about GDP and how its calculated (which eliminates anyone in Washington and most political pundits) this should be no surprise.

Let's look at three graphs for the above data. 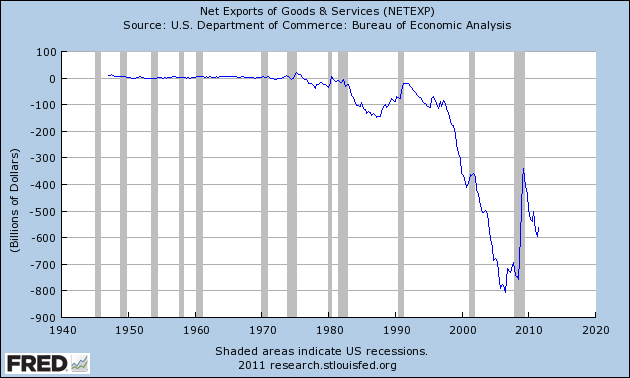 The US is still a net importer.  However, the level of the overall rate is actually better than it was at the height of the last expansion. 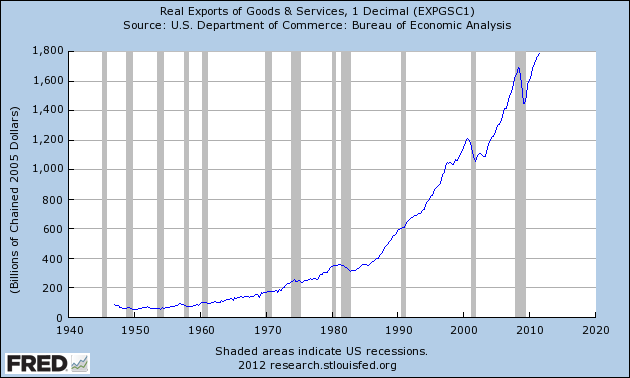 Given that we are still a net importer, consider the above chart -- the US' net exports.  Exports are doing very well right now. 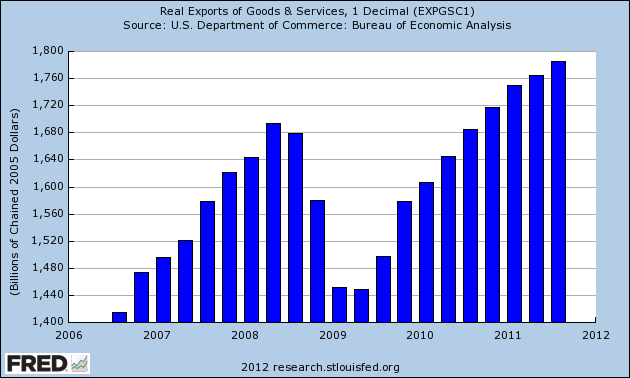 
Inflation continued to decrease relative to earlier in the year. Indeed, the PCE price index edged down in October. Consumer prices for energy decreased, and survey data indicated that gasoline prices declined further in November. Increases in consumer food prices in October were substantially slower than the average pace in the preceding months of this year. Consumer prices excluding food and energy also continued to rise at a more modest pace in October than earlier in the year. Near-term inflation expectations from the Thomson Reuters/University of Michigan Surveys of Consumers declined in early December, and longer-term inflation expectations remained stable. 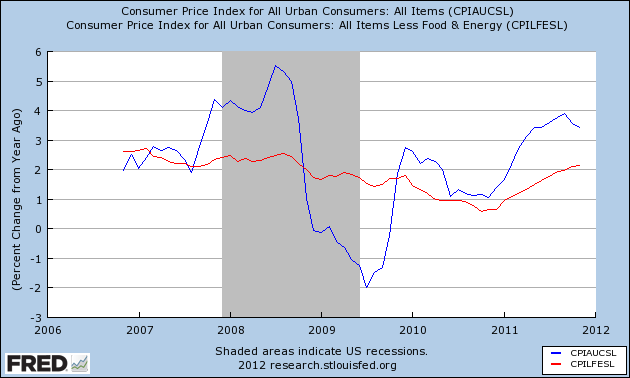 The above chart shows the percentage YOY percentage change in total and core CPI.  This is where I disagree to a point with the FED.  First, I'm not an alarmist who thinks we are facing a bought of hyper-inflation that will kill the economy and turn us into a Weimar republic.  However,  because I watch the futures markets on a regular (read daily) basis, I've seen both oil and agricultural commodities spike massively over the last few years.  While I don't see hyper-inflation, I do see commodity price spike possibilities in both the oil and agricultural markets this year, which could have a deleterious effect on an already low consumer sentiment.


Measures of labor compensation indicated that nominal wage gains continued to be subdued. Compensation per hour in the nonfarm business sector increased moderately over the year ending in the third quarter, while the 12-month change in average hourly earnings for all employees remained low in October and November. Unit labor costs edged up over the past four quarters.

I also highlighted this in the employment link above.  The decline in DPI has led consumers to dip into savings.  While a lowered DPI is to be expected when unemployment is high, at some point a lowered DPI and household wealth situation combined with a declining savings rate will lead to depressed consumer spending.


Foreign economic growth, especially in the euro area, appeared to weaken in recent months. Real gross domestic product (GDP) in the euro area barely edged up in the third quarter. Moreover, industrial production in the region fell sharply in September, and indicators of manufacturing activity in October and November pointed to lower output. Measures of business and consumer confidence in the euro area continued to decline in recent months. In other advanced foreign economies, real GDP in Japan rebounded in the third quarter from the effects of the earthquake in March, and real GDP recovered in Canada as oil production picked up after several months of shutdowns; however, available indicators of manufacturing activity in both of these economies pointed to declines during the fourth quarter. Among emerging market economies, real GDP in Brazil was flat in the third quarter, while exports from China slowed in recent months, although Chinese domestic demand appeared to remain strong.

The EU area is the big wild card in the room.  The latest data indicate that if they're not already in a recession, than they soon will be.  That could have a very negative impact in the US.  Asia is slowing, but all signs are that it is in better shape than the EU.

In conclusion,we're pretty much where we've been for the last year.  The consumer is spending, but not at fast enough rates to kick the economy into higher growth.  Businesses continue to invest and exports are growing.  However, austerity is really hurting as is the housing market.