Will Food Prices Reassert Themselves?

Three stories over the past week caught my eye:

First, we have a dry spell in South America:


Crop prices rose sharply this week on worries that unusually dry weather in South America could cut global supplies. Temperatures rose last week in South America and rains that fell over the weekend were lighter than had been expected. The dryness could leave corn plants there stunted because they are pollinating this time of year.

According to the Associated Press, traders are worried that lower exports from Brazil and Argentina could reduce world food supplies. Strong demand from livestock producers and ethanol makers has already drawn down global reserves of corn and soybeans.

Crop prices had been falling this winter on expectations that exports from the United Sates could help supply the global market. A hot summer didn't damage the U.S. corn crop as severely as some traders had expected. But gains from the U.S. Farm Belt could be offset by losses in South America if dry weather there leads to lower crop yields.

Second, we have a lack of corn seed supply in the US midwest:


As farmers across the U.S. prepare to plant this year's corn crop, they are running up against an unexpected obstacle: a lack of seed.

By some estimates, U.S. production of corn seed was down 25% to 50% ahead of this planting season. Output of corn seed, which is grown from specialized plants, was sliced by drought conditions across the Midwest and the Great Plains last year

The shortage of seed threatens to scuttle what some expect to be the biggest planting of corn in the U.S., the world's largest producer, since World War II. Early forecasts have been calling for up to 95 million acres to be sown with corn this spring, a 3.4% increase from 2011.

The problem could mean the second year in a row of tumult for the corn market. Last year, hot weather led to a smaller U.S. crop than traders had expected, fueling a historic rally in corn prices to a record $8 a bushel in late spring.

Third, we have this:


Hedge funds raised their wagers on higher commodity prices by the most since July 2010 after signs of accelerating U.S. growth bolstered optimism that demand for raw materials will strengthen.

Money managers expanded their combined net-long positions across 18 U.S. futures and options by 25 percent to 671,915 contracts (.MMLOSH) in the week ended Jan. 3, Commodity Futures Trading Commission data show. Bullish bets on cotton rose the most since April 2009 and those on coffee doubled. Crude-oil holdings reached a three-week high.

Prices for metals and bulk commodities such as coal rose at least 85 percent of the time since 2004 when global industrial production strengthened, Macquarie Group Ltd. estimates. U.S. unemployment fell to the lowest in almost three years, and it joined China, Australia, Germany, India and the U.K. in reporting manufacturing gains. Almost $253 billion was added to the value of global equities last week on speculation economies will skirt a slump as Europe’s debt crisis deepens.

“You’ve been seeing a risk-on trade across the board, not just in commodities,” said John Bailey, the founder and chief executive officer of Stamford, Connecticut-based Spruce Private Investors LLC, which advises investors holding about $3 billion of assets. “Between a calming in Europe and better-than- expected numbers in the U.S., including employment and housing, that has led to a risk-on attitude among managers.”

That got me thinking about this graph, which shows the YOY percentage change in the food price component of CPI: 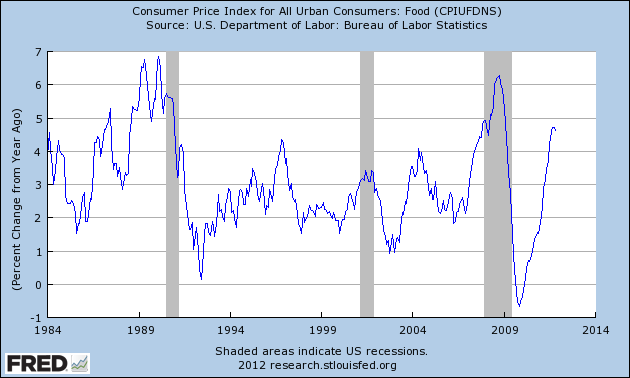 While food prices only comprise 14.79% of CPI calculations transportation prices only comprise 17.3%.   Yet, large oil spikes (and subsequent gas spikes) can have a disproportionate effect on consumer sentiment and spending.  And while the chart above does not conclusively state that high YOY percentage changes always proceed a recession, it does say that high high prices can be a precursor to recession.  So, it behooves us to keep an eye on this situation.

I always look at the grains charts as a proxy for food prices, largely because corn, wheat and soybeans are the foundations of the US food system.  To that end, consider these charts of grains: 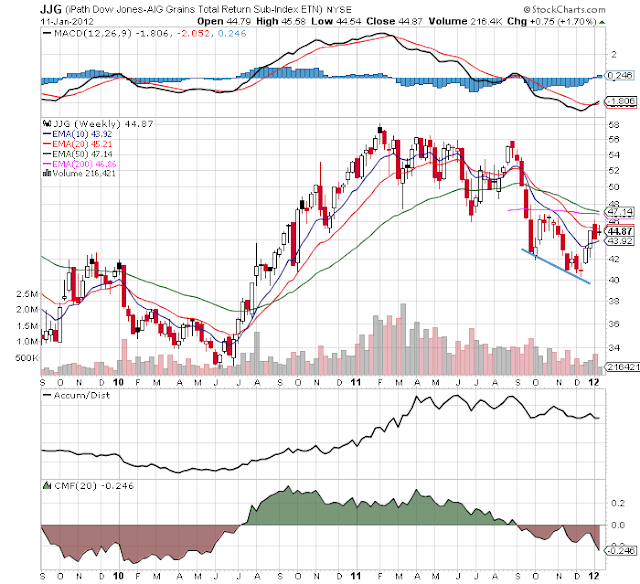 The weekly grains chart sold off at the end of last summer and drifted lower through mid-December.  Prices rallied strongly at the end of last year and in the first week of January.  While the EMA picture is still bearish, prices have rallied into the 20 week EMA.  The MACD has given a buy signal as sell, although the A/D and CMF volume indicators are weak. 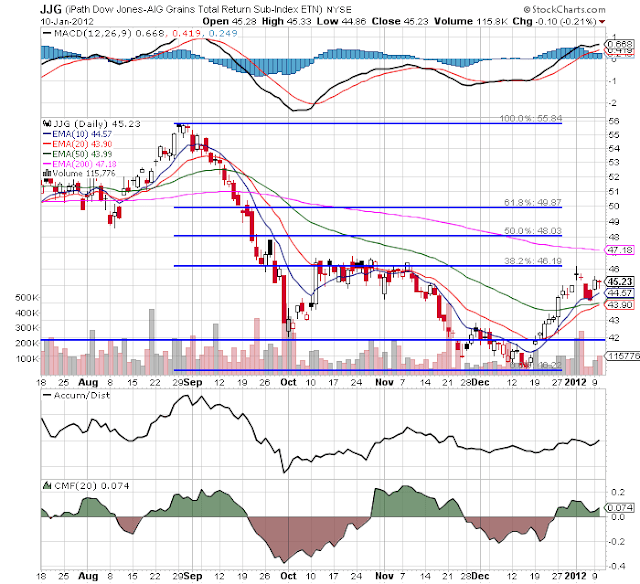 The daily chart shows that grains have rallied strongly over the last few weeks.  Prices have advanced through the 10, 20 and 50 day EMA.  These EMAs are also rising, with the 10 now moving through the 50.  The MACD is rising and has now turned positive.  However, the A/D line is not that exciting, although the CMF shows some positive movement.

In short, food prices may be a problem to keep an eye on this year.