Yesterday, commenter I Will Not Accept the Terms of Service (great name, BTW) asked the following question:

These charts of been going up for 2 weeks And you still arent impressed? ;-)

We followed with a few exchanges, which ended with this (from him): At the same time, if stocks rise and bonds haven't yet started falling, that means there's still a lot of money sitting outside the equity market wondering if it should come back. I guess maybe you really just want to see it take off first before committing... which is okay I guess.

This gives me a good set-up to the way I look at the markets.

I'm a huge fan of inter-market analysis.  Put another way, one market's price action does not happen in a vacuum.  Other markets and the economy also have to act/react in certain ways.  We also have to consider the fundamental economic situation to see if that information jibes with the markets.  For more on this, I would suggest reading John Murphy's Intermarket Analysis, or Martin Pring's The All Season Investor.

Yesterday, I posted an article titled, "What Will It Take For Me to Be Impressed With the Markets?" where I outlined other technical developments that I need to see.  First, it's not important to me that the markets are rising, but how they are rising. To me, the equity price charts are very weak -- the candles are small, intra-day action is weak and volume is low.  In addition, we haven't seen other markets either sell-off (the treasury market) or rally (copper).  If the stock market were really in a strong upswing we'd see money come out of the safety bid (treasuries) and more money move into industrial commodities (copper).  Also consider that as of the end of last year the best performing market for a year was the treasury market -- which is not a harbinger of a strong equity market.  Finally, while the US' fundamental situation is improving, Europe is on (or at the beginning of) a recession and Asia is slowing.  Can the US realistically de-couple from these markets and not have it effect growth?  I have my doubts on that.

Finally, let me add this: I could be wrong.  The markets like to make an ass out of all analysis (myself included) on a regular basis.  So, I would recommend that you also read the writings of  a more bullish analyst as well because they could be seeing things correctly.

All that being said, something I forget to add to my "What Will It Take For Me to Be Impressed With the Markets" article was the dollar.  For the last 6-9 months, the dollar has been the beneficiary of a safety bid, largely caused by the declining euro.  However, there has been talk in the currency markets that the dollar may now be benefiting from the "risk on" trade.  This means that as the US economy improves, more international investors want to invest here, which increases the dollar's value. 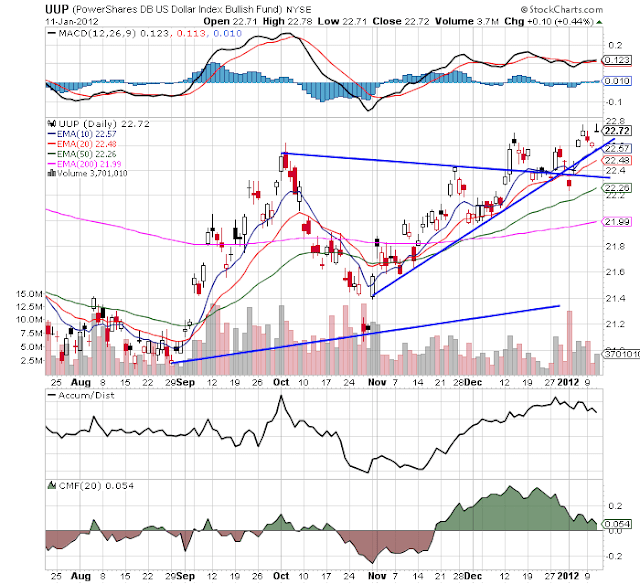 The dollar spent the last quarter of the year in a symmetrical consolidation pattern.  Prices broke out mid-December and have drifted higher since.  However, notice the weakening position in the A/D and CMF; both are indicating that the volume inflow is declining.  In addition, the MACD is even and not showing much momentum.  For the dollar, the big question is, "is this now rising because of increased confidence in the US economy, or is it a safety trade because of a declining euro?"  I think it's a bit of both right now, meaning a continued move higher in the dollar would be a net positive. 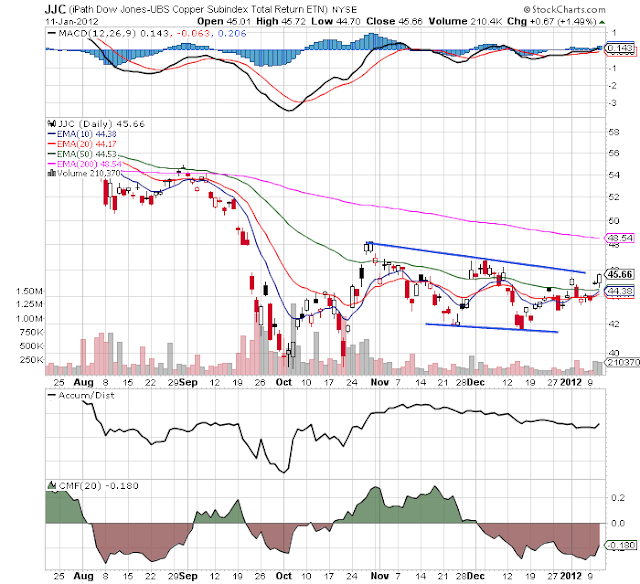 Yesterday, copper had a nice pop and is now right at upside resistance.  Which we're not out of the woods yet, we are closer. 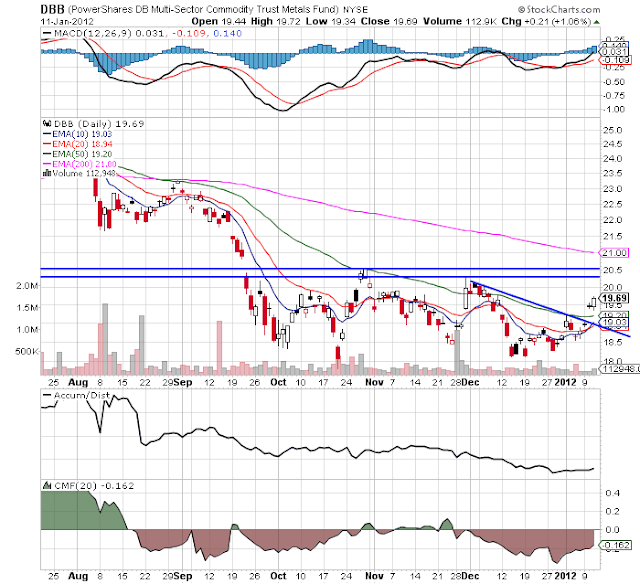 In addition, industrial metals (which includes copper) have moved through resistance and are now approaching resistance.  While the MACD has given a buy signal, the EMA picture is still weak and the CMF/A/D picture is muted. 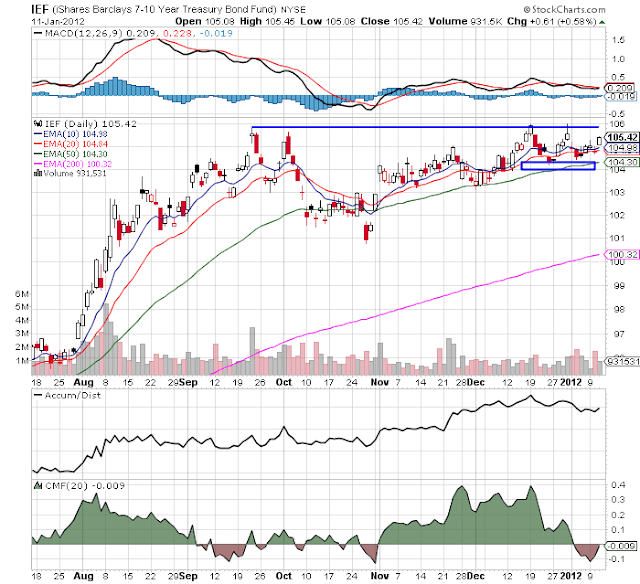 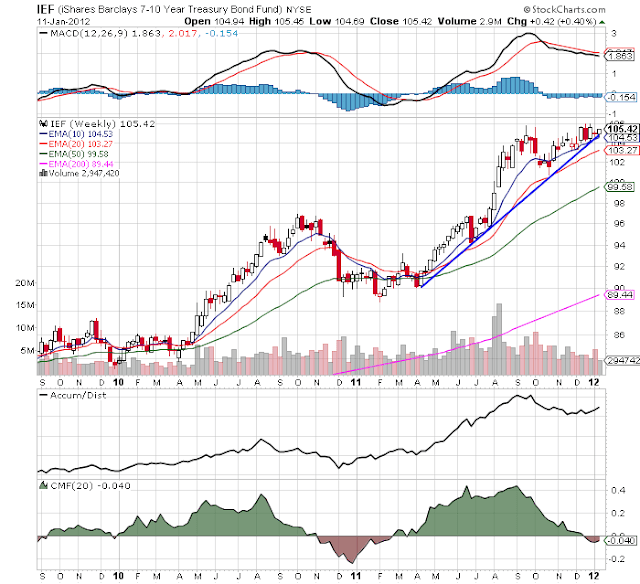 So, the short version is the conditions are improving; the dollar is rising (some of which is a risk on trade) and copper specifically and industrial metals generally are improving.  But the treasury market is still strong, which is not equity positive and which ultimately gives me great pause.