This post is part of the Bonddad Economic History Project. 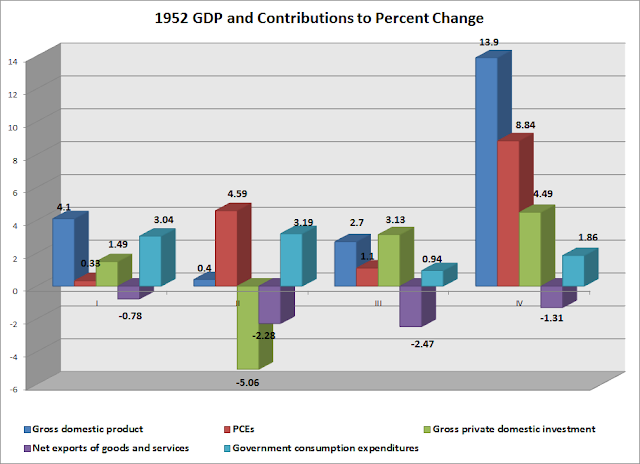 Above is a graph of the percentage change in GDP and the contributions of various subparts.   The data tells us the following:

1.) There were two quarters of very good growth -- the first and fourth quarter.  The second quarter the economy was very close to 0% while the second quarter's growth was fair.

2.) PCEs provided a lot of firepower in the second and fourth quarter, while they added some in the third.

3.) Gross private investment was very strong in the third and fourth quarter.  It was a primary reason for the drag on growth in the second quarter.

4.) Net exports subtracted from growth in each quarter of the year.

5.) Government spending (from the Korean War) was the primary driver of growth in the first and second quarter.  It contributed in the third and added remarkably little in the fourth.
Posted by Unknown at 9:30:00 AM