What Does "Not in the Labor Force" Mean?

There is a good and bad point about the internet. It has greatly increased the number of people who can write and provide opinions about things. This is also bad, as there are a lot of people out there who have no idea what they're talking about. Case in point: Friday's jobs report and the 487,00 increase in the number of people "not in the labor force." To the average commenter -- the one who doesn't bother to look up what this term means to the BLS -- this means all those people gave up looking for work, indicating the economy is in fact terrible. However, that's just not the case.


Labor force measures are based on the civilian noninstitutional population 16 years old and over. Excluded are persons under 16 years of age, all persons confined to institutions such as nursing homes and prisons, and persons on active duty in the Armed Forces. As mentioned previously, the labor force is made up of the employed and the unemployed. The remainder—those who have no job and are not looking for one—are counted as "not in the labor force." Many who are not in the labor force are going to school or are retired. Family responsibilities keep others out of the labor force.
A series of questions is asked each month of persons not in the labor force to obtain information about their desire for work, the reasons why they had not looked for work in the last 4 weeks, their prior job search, and their availability for work. These questions include:
These questions form the basis for estimating the number of persons who are not in the labor force but who are considered to be "marginally attached to the labor force." These are persons without jobs who are not currently looking for work (and therefore are not counted as unemployed), but who nevertheless have demonstrated some degree of labor force attachment. Specifically, to be counted as "marginally attached to the labor force," individuals must indicate that they currently want a job, have looked for work in the last 12 months (or since they last worked if they worked within the last 12 months), and are available for work. "Discouraged workers" are a subset of the marginally attached. Discouraged workers report they are not currently looking for work for one of four reasons:
Additional questions about persons not in the labor force are asked during each household's last month of its 4-month tenure in the sample rotation pattern. These questions are designed to collect information about why these people left their previous jobs, when they last worked at a job or business, and whether they intend to look for work in the near future.

Let's look at this in more detail.

Let's take a look at some data: The above chart is the total figure for "not in the labor force," not seasonally adjusted.  Notice that this number has been slowly creeping up since the end of the 1990s.  Put another way, the increase is hardly a new development, and probably has something to do with the aging baby boomers. 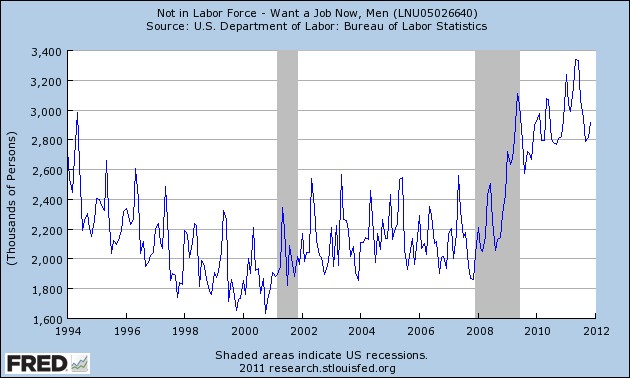 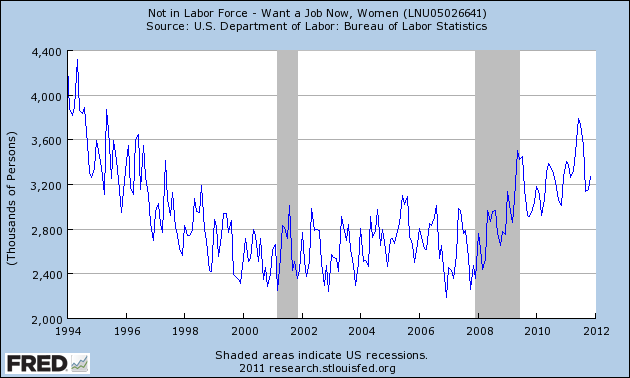 The above two charts show the number of men and women not in the labor labor force who want a job now -- this is the category that many people are talking about.  Notice that we're actually talking about 6 million people in these charts -- or about 7% of the total amount of people who "aren't in the labor force." 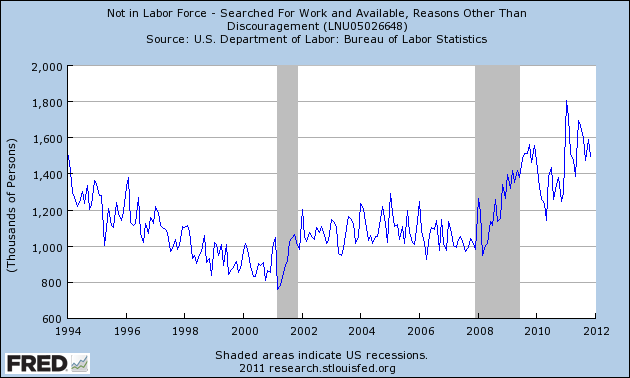 The above chart is the people "not in the labor force" but have searched for work and are available.  Notice this number is about 1.675 million -- with is a little under 2%.

The BLS phrase, "not in the labor force" is a statistical term; if you're going to use it, it helps to first understand what it means.  The vast number of people who are using the term are doing so for political reasons -- without clearly understanding the term.

1.) Not in the labor force is a statistical measure, and is primarily comprised of retirees and students.

2.) Labor under-utilization -- which is what most people are concerned with when it comes to this statistic -- actually represents less than 10% of the "not in the labor force" number.

And no, I am not trying to make light of the plight of the unemployed.  However, it's also important that we understand the terms and definitions we're using in order to properly discuss what we're talking about.
Posted by Unknown at 2:30:00 PM