Friday's employment report continued the trends of employment as continued to initial jobless claims that were established in March 2009.

First of all, here is the updated graph comparing population-adjusted initial jobless claims with payrolls: 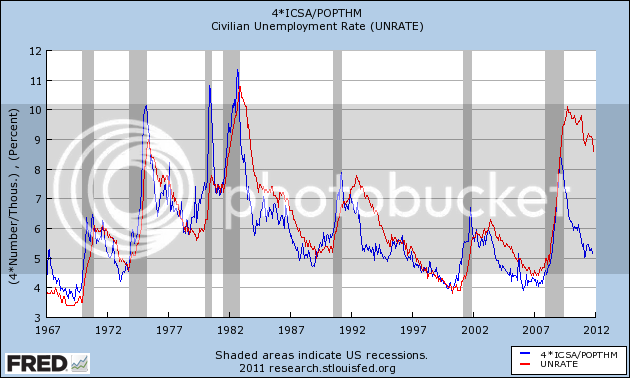 This relationship was historically very close beginning in 1967 but broke down in 2009. For the last two years, however, the new relationship established then has continued. A change in the population adjusted initial jobless claims rate is mirrored in the unemployment rate, frequently with a 1 or 2 month delay: 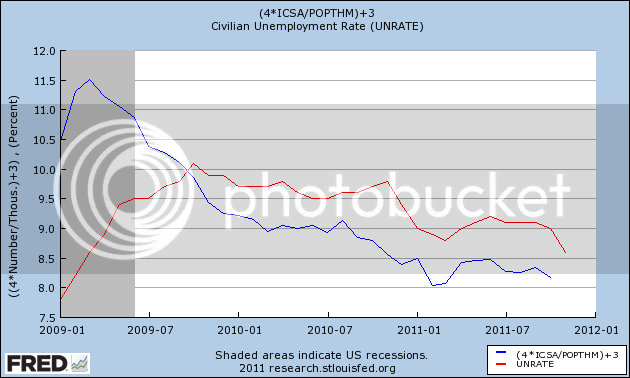 I've also noted that if we were to be heading towards a "double-dip," we should expect the relationship between the number of initial jobless claims and employment growth to change, whereby in the net many more jobs are lost per any given rate of initial claims. Although there may be some very slight drift in that direction since April (brown points), it hasn't happened in any meaningful way: 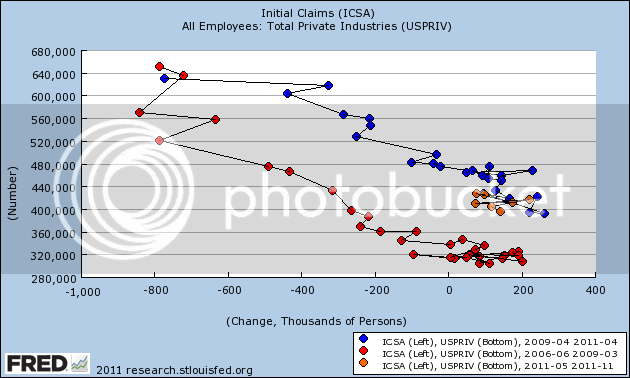 The longer term leading relationship of initial jobless claims to the unemployment rate (comparing the last 6 months' average with the average over the same six month period one year prior) as measured by Thumbcharts is also intact: 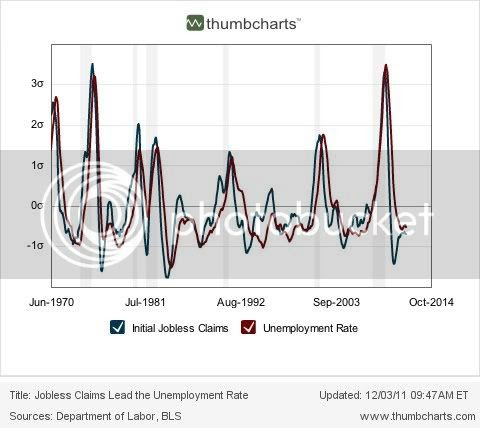 
I thought it might be useful to create a sort of benchmark for the level of job growth that would really count as good news.…
[L]et’s set a … modest goal: return to more or less full employment in 5 years –which means seven lean years of depressed employment. To keep up with population growth over those 7 years, the United States would have had to add 84 times 127,000 or 10.668 million jobs. (If that sounds high, bear in mind that we added more than 20 million jobs over the 8 Clinton years). Add in the need to make up lost ground, and we’re at around 18 million jobs over the next five years — or 300,000 a month.

So that’s a useful benchmark.


With that in mind, here's a graph of monthly gains in civilian employment from the Household Survey since its bottom: 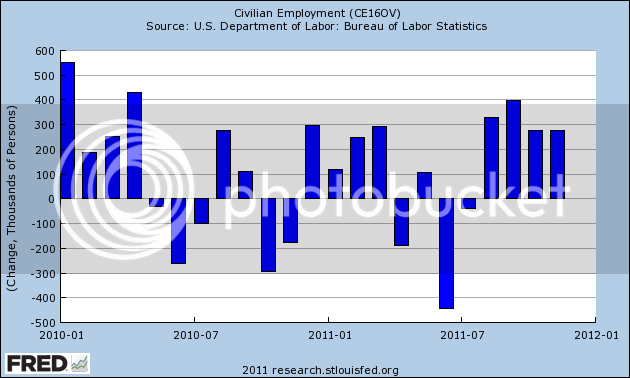 No, it isn't the more generally reported Establishment Survey data, but the Household Survey does tend to lead at inflection points, and for the last 4 months, the average employment gain in the Household Survey has been 321,000/month, with the lowest being 277,000. I'm not nitpicking the Professor, but it's worth noting that this does meet Prof. Krugman's threshold criteria for actual good employment news.
Posted by New Deal democrat at 8:30:00 AM