From the ISM Manufacturing Report:


"The PMI registered 52.7 percent, an increase of 1.9 percentage points from October's reading of 50.8 percent, indicating expansion in the manufacturing sector for the 28th consecutive month. The New Orders Index increased 4.3 percentage points from October to 56.7 percent, reflecting the second month of growth after three months of contraction. While the Prices Index, at 45 percent, increased 4 percentage points from the October reading of 41 percent, prices of raw materials continued to decrease (registering below 50 percent) for the second consecutive month. Respondents cite continuing concerns about the general economic environment, government regulations and European financial conditions, but are cautiously more optimistic about the next few months based on lower raw materials pricing and favorable levels of new orders."

Let's look at the anecdotal information:


"Business still holding its own. Some growth in margin now that some of the raw materials prices have abated. Oil is pushing $100 so that has not been favorable." (Chemical Products)

"Orders for the remaining two months have increased after an extended 'summer dip' in sales overall. We expect to finish the year approximately 10 percent above 2010." (Electrical Equipment, Appliances & Components)

"Seeing a slight slowdown in orders; could be related to the holidays." (Primary Metals)

"Material lead times are getting longer. Seems like no one is hiring. Trying to do twice the output with the same amount of people." (Food, Beverage & Tobacco Products)"Japanese auto production has returned to 100 percent, and domestic manufacturing continues to increase." (Fabricated Metal Products)

"Oil exploration seems to be really picking up. Government is permitting again, so business is the busiest we've ever seen." (Computer & Electronic Products)

"The EPS ruling about higher fees for coal-generated electricity can have a huge, negative impact on our business if implemented in January 2012. We are at the peak of our seasonal demand push." (Plastics & Rubber Products)

"Thailand flood impacting our business. Honda and Toyota cut production forecasts, and we are chasing some components made in Thailand." (Transportation Equipment)


Note that most of the information above is positive.

Let's coordinate the above data with the recently released Beige Book:

In short, manufacturing is holding its own.  Let's take a look at the data in graph form: 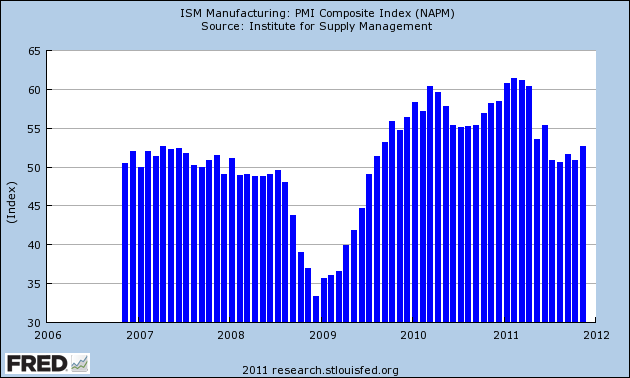 Although the composite number dropped to just above 50, the latest reading gives us some "breathing room." 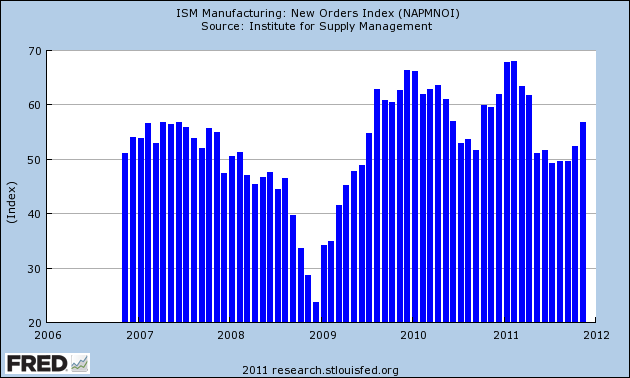 Although new orders are skewed (see above) the overall print is strong. 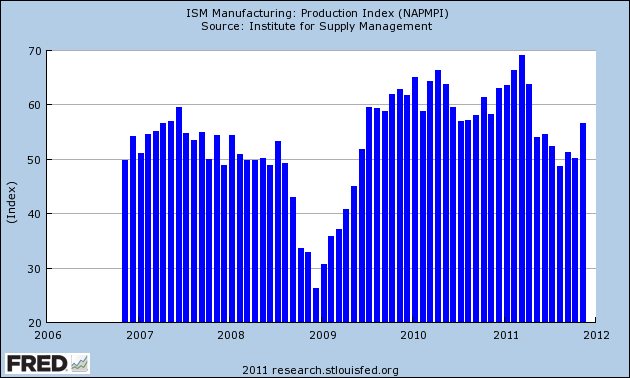 The overall production index is also shows a good print. 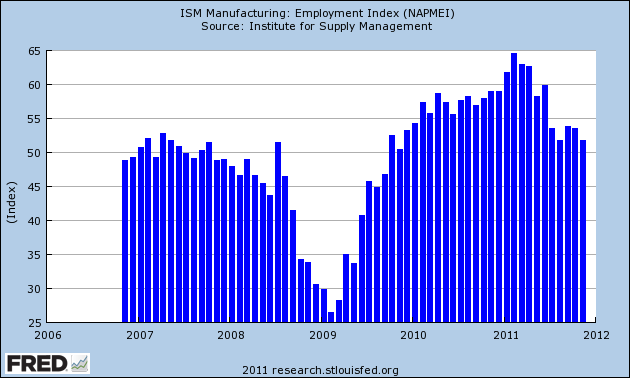 However, the employment number is still weak, although it does show slight expansion in this area as well.
Posted by Unknown at 8:30:00 AM