This morning the WSJ has an article entitled Demand for Temp Help Cools including a graph of the YoY% change in the American Staffing Association index. This note was picked up by Mish, who furthers the analysis by including the American Staffing Association's graph of its staffing index beginning July 1, 2006, highlighting that the index has been lower YoY since mid-August.

Since this index is a component of my "Weekly Indictors" needless to say I am familiar with this data. While the data cited by both is accurate, the interpretation is misleading in the case of the WSJ, and Mish misreads it.

To begin with, temporary hiring is indeed a leading component of employment data, tending to both peak and trough before overall employment. To cut to the chase, here is the graph of temp hiring from the BLS employment report for the last 10 years: 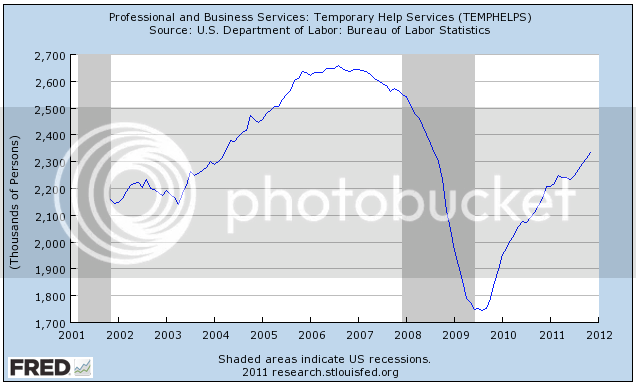 Note that temp hiring peaked about 18 months before the recession began, and bottomed in late 2009 about 6 months before the bottom in employment generally. Secondly, note that this number briefly declined earlier this year and has since resumed its strong advance.

Simply put, temporary help in no way supports a claim that we are on the cusp of recession.

What is wrong with the WSJ analysis shows the shortcomings of relying on YoY comparisons. Because of seasonality, sometimes there is no choice but to do so, but in that case, you have to be mindful of the second derivative as well: are the YoY comparisons getting better or worse? Beginning in about March of this year, the YoY comparisons even while still positive began to deteriorate significantly. The YoY comparisons were at their worst at about the beginning of September, and since then have improved, even though they are still slightly negative YoY. This is easily seen on the ASA's graph of their employment index as reposted by Mish, which also shows that the raw ASA index number stalled in early summer, and since the beginning of autumn has resumed its improvement (as I have duly reported each week in my "Weekly Indicators" column): 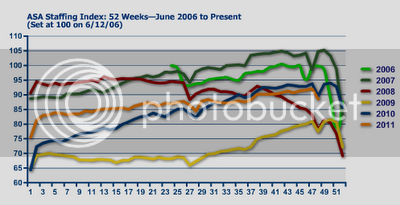 ... [C]onsider the possibility employers are slowly dumping temps and contract workers, and permanent employees may be next.


Mish's analysis would have been spot on a few months ago during the summer employment stall, but is no longer true. Just as the ASA index's late 2009, 2010 and early 2011 readings were also "lagging 2006 and 2007", but still improving, meaning that temp services were increasing, so now even though November's readings were slightly below last November's readings, the index is increasing again, and indeed the YoY comparisons, while still negative, are slowly improving as well.

To repeat: the ASA temp service index is simply not now signaling a recession.

A long time ago in a galaxy far, far away, Mish did some great work.  And he's still capable of doing that work.  However, at some point in the last few years he because drunk with success and enthralled with his own political agenda.  At this point, he became utterly useless as an economic analyst.