One Salient Oversight is a kindred blogger who also dissects historical patterns of economic expansion and contraction. He tracks three series, two of which are virtually identical to the "Kasriel Recession Warning Indicator." Based on those, he believes that a recession will start between Q4 of this year and Q4 of next year.

Like Kasriel, he relies upon the yield curve (inverted vs. positive), and real inflation-adjusted money supply (except he uses real monetary base vs. Kasriel's real M1).

His third indicator is real long term interest rates. Specifically, whether 10 year treasuries are yielding more or less than the inflation rate. It is specifically this indicator which has, according to his model, turned negative, presaging a recession. Here's his graph showing the real 10 year treasury yields for the last several years, showing it has been below the rate of inflation for the last 3 months: 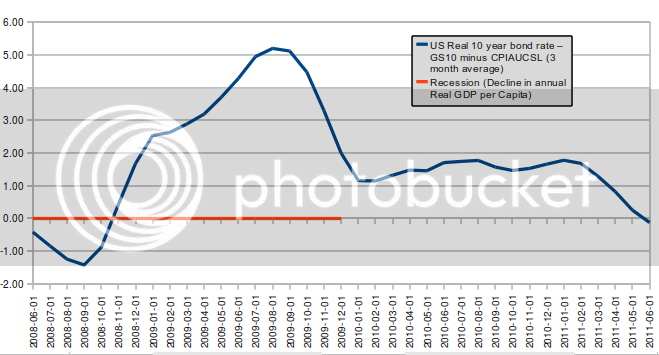 One Salient Oversight's point is that a negative real long term interest rate doesn't always occur before a recession, but rather since 1954, whenever the rate does turn negative, a recession has always followed. You can see his in-depth graphic parsing of this indicator here.

To better look at this relationship, I have broken the relationship down to its two component parts. Here are 10 year treasury rates vs. inflation from 1964 to 1987: 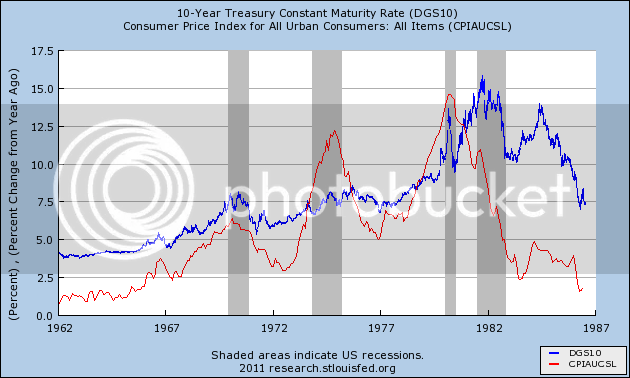 and here is the continuation from 1987 to the present: 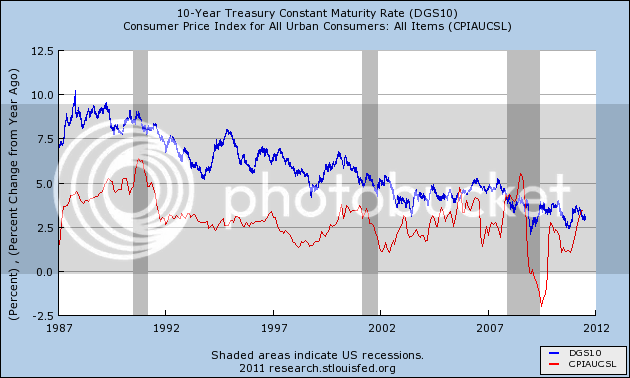 One Salient Oversight is indeed correct that during this time, whenever the inflation rate has exceeded the yield in 10 year treasuries, a recession has followed.

But what about before 1954? The "great recession" and its aftermath appear more like pre-WW2 recesions than postwar inflationary recessions brought about by Federal Reserve tightening. Since 10 year treasury data only goes back to the early 1950s, to go back further, you need a proxy that yields the same or similar results.

Indeed, such a proxy exists, in the form of the series LTGOVTBD (long term government bonds) that runs from 1925 to 2000.

First of all, here is the same relationship using LTGOVTBD over the post 1954 era and it almost exactly tracks the 10 year bond series, and makes the same predictions, so we know it is a good proxy: 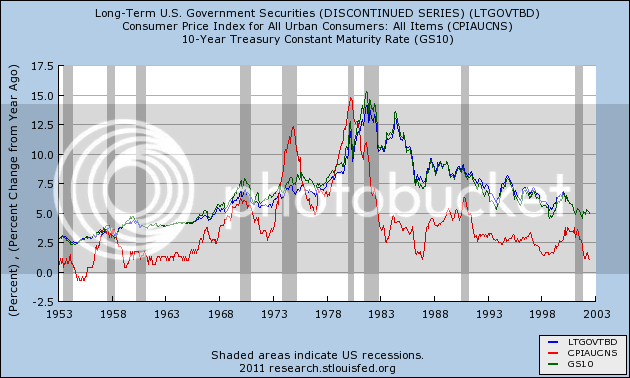 But here is the problem: from the great depression until 1954, you get almost the exact OPPOSITE result as in the more modern era. Negative real long term rates occur during most of the New Deal, WW2, and immediate post-war era. In fact, they are at their trough at about mid-expansion. And these were the biggest expansions of the entire 20th century: 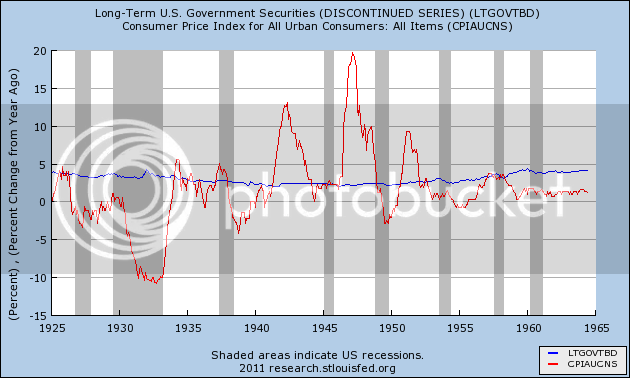 If we believe that our current situation is more akin to the pre-WW2 situation, negative real interest rates are of no help at all.

Nevertheless I think One Salient Oversight is on to something, especially as ECRI has vehemently denied that an inverted yield curve is part of their analysis, but appears to acknowledge that bonds are a component of their "black box." One big difference is that in the post WW-2 inflationary recessions where the indicator works, bond yields as well as inflation have both spiked higher compared with their 2-5 year average. By contrast, in the New Deal, WW2, and immediate post-war era, interest yields did not spike at all compared with inflation.
Posted by New Deal democrat at 11:30:00 AM