Before we look at charts, consider the following points.

First, here is a graph of the YOY percentage change in the food component of CPI: 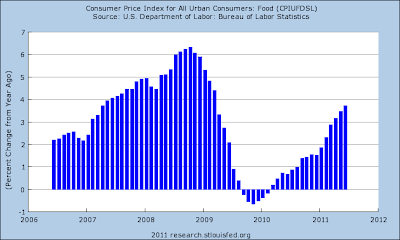 Notice that -- in contrast to oil's price drop -- this price index is still increasing.

Also consider this from Time Magazine (which should sound familiar to regular readers of this blog):

Ironically, the roots of our food crisis lie in what is otherwise a great leap forward for humanity: the alleviation of poverty in the developing world. As the poor in China, India and other emerging economies escape destitution, they can afford to load up their plates more than ever. Grain consumption in the developing world has increased 80% over the past 30 years, compared with a rise of only 22% in the advanced economies. And, more important, the nouveaux riches of Beijing and Rio de Janeiro are changing their diets, adding more meat and other luxuries that were once out of their financial reach.

The amount of meat each person consumes has doubled over the past three decades. That puts extra pressure on agriculture. To raise enough cows and pigs to supply the steaks and chops people demand, corn and other grains are diverted from people to animals. On a U.S. feedlot, it can take about 6 kilos of grain to produce 1 kilo of beef, plus thousands of liters of water. Adding to the increased demand for corn is the growing popularity of biofuels. In 2000 only 6% of America's corn harvest was used to manufacture ethanol; now about 40% is — enough to feed at least 350 million people, according to the Earth Policy Institute.

In short -- food prices are still at high levels, despite the sell-off we've seen in some other commodities. And the primary reason is basic supply and demand: as the world's population sees an overall increase in their standard of living (especially in India, China and Brazil), demand increases at the same time that supply is tightening up.

That being said, notice that all grain charts show sideways consolidation rather than drops in price over the economic slowdown:

Soybeans rallied from July of last year until the late Spring, gaining a little over 50%. After breaking trend, they have moved sidewards in a range between 1300 and 1400.

Wheat has been moving sideways for almost a year. It has strong support right around 625 bushel.

Fundamental supply and demand issues are keeping a floor under prices.
Posted by Unknown at 4:55:00 PM