Lack of Demand Is Big Problem 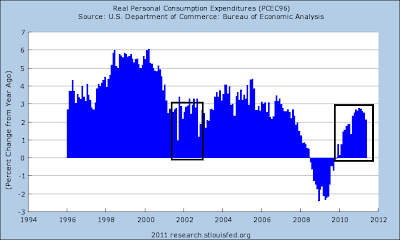 Above is a chart of the percentage change from a year ago in real personal consumption expenditures. Notice that the current pace of YOY percentage change is directly analogous to the 2001-2003 period -- a time of very slow growth where we again heard the phrase jobless recovery. It was also during this time that the Fed kept interest rates very low out of concern for a possible deflationary environment. In short -- YOY percentage changes of this lower magnitude are associated with periods of lower growth.

It could also be argued that the US consumer is starting to change his spendthrift ways. Remember that the previous expansions in consumer spending were fueled by easy credit and the ever increasing accumulation of household debt -- which eventually reached over 130% of disposable personal income at the national level a few years ago. Over the last few years, we've seen a big bump in the savings rate and a decline in the household financial obligations ratio, indicating consumers are paying down debt in a meaningful way. We've also seen an overall slowdown in spending. In short, it's beginning to look like we could argue the US consumer is changing to a slower spending model.
Posted by Unknown at 8:30:00 AM