Housing and the economic stall

This morning's good news on housing permits (624,000) and starts (629,000) is particularly welcome because, in my opinion, housing has been an unnoticed contributing factor to this year's economic stall.

It has done so because in comparison with the bust of 2006-2009, it's a mere squiggle on the graphs. For example, here is a graph showing the last 10 years of housing permits and starts: 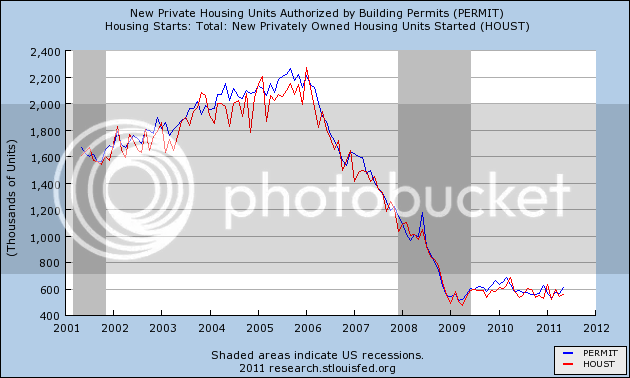 Since WW2, a sustained decline of at least 200,000 from a recent peak has been required to be consistent with actual economic contraction. As the above graph shows, from the 2006 peak until early 2009, housing permits and starts declined over 1.5 Million! This is one of the three worst declines on a population-adjusted basis in the last 85 years (the others being 1926-33 and 1973-75).

In the graph above, the last 2+ years looks like a sideways squiggle. But look what happens when we zoom in, as in the below graph which shows housing permits since 4Q 2008, averaged per quarter to smooth out the results (note: graph ends with Q1 2011): Now we can see that after a 125,000+ improvement in permits from Q1 2009 to Q1 2010, 100,000 of that was entirely given back in the next year. While this loss isn't enough to be consistent with a housing-caused recession, it IS enough to put quite a dent into growth.

Today's good housing numbers mean that for 2Q 2010 housing permits and starts will average over 600,000, the best quarter in over a year. Unlike the 2009 advance, this one does not depend on the artificial stimulation of an $8000 housing credit. It might be a one-off quarter, or it might be the start of the slow resurrection of the new housing market. If so, the effects will boost the economy significantly beginning in 2012.
Posted by New Deal democrat at 1:30:00 PM