According to the Census Bureau, retail sales increase 1.2% last month,

Let's take a closer look at the data. 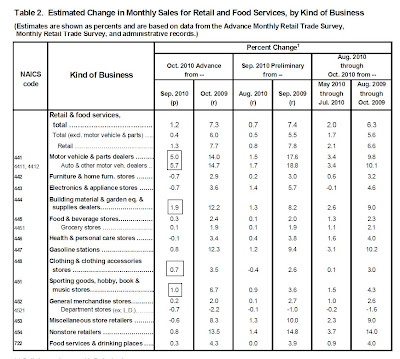 However, the Empire State manufacturing report was downright ugly:

The Empire State Manufacturing Survey indicates that conditions deteriorated in November for New York State manufacturers. For the first time since mid-2009, the general business conditions index fell below zero, declining 27 points to -11.1. The new orders index plummeted 37 points to -24.4, and the shipments index also fell below zero. The indexes for both prices paid and prices received declined, with the latter falling into negative territory. The index for number of employees remained above zero but was well below its October level, and the average workweek index dropped to -13.0. Future indexes generally climbed, suggesting that conditions were expected to improve in the months ahead, although the capital spending and technology spending indexes inched lower.

The general business conditions index fell below zero for the first time since July of 2009, dropping a steep 27 points to -11.1—an indication that, on balance, conditions had worsened over the month. The percentage of respondents reporting that conditions had improved fell from 35 percent in October to just 17 percent in November, while the percentage reporting that conditions had worsened rose from 20 percent to 28 percent. The new orders index plummeted 37 points to -24.4, its sharpest drop since September 2001. Nearly 40 percent of respondents reported that orders were down. The shipments index fell 26 points to -6.1, and the unfilled orders index declined 23 points to -24.7. The delivery time index, at -9.1, was little changed. The inventories index rose to zero after dropping into negative territory last month.

Here's a chart of the data. 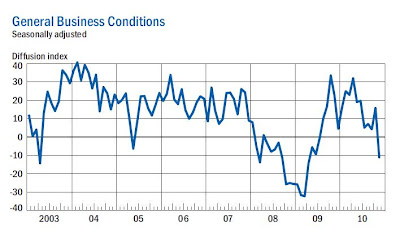 Simply put, this number stinks. While the Eastern seaboard manufacturing numbers have been poor for the last few months, a drop of this magnitude was unexpected.
Posted by Unknown at 11:30:00 AM