The Stupidity of the Republican QEII Response

I am now thoroughly convinced there is a place in Washington DC where all politicians go to have a lobotomy. It doesn't matter what party they are members of; all politicians who go to DC are quickly lobotomized. I should add -- I think this also applies at the state level, but am unsure if it's every state (at least, yet). The mass lobotomy theory is the only answer to the abject stupidity of the ideas that are getting floated right now.

A group of prominent Republican-leaning economists, coordinating with Republican lawmakers and political strategists, is launching a campaign this week calling on Fed Chairman Ben Bernanke to drop his plan to buy $600 billion in additional U.S. Treasury bonds.

Former Congressional Budget Office director Douglas Holtz-Eakin, above, is among economists urging Fed Chairman Ben Bernanke, top, to drop plans for big new bond purchases."The planned asset purchases risk currency debasement and inflation, and we do not think they will achieve the Fed's objective of promoting employment," they say in an open letter to be published as ads this week in The Wall Street Journal and the New York Times.

The economists have been consulting Republican lawmakers, including incoming House Budget Committee Chairman Paul Ryan of Wisconsin, and began discussions with potential GOP presidential candidates over the weekend, according to a person involved.

Let's start with a basic look at inflation, keeping in mind we've already seen a round of quantitative easing. 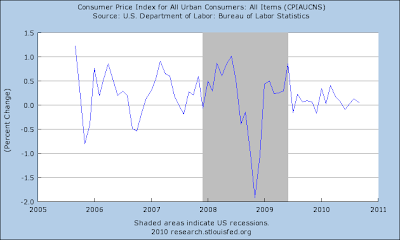 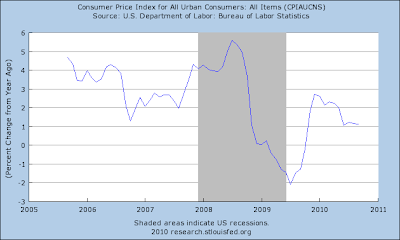 Above is a chart of the year over year percentage change in inflation. Notice that -- like the month to month numbers -- this has also been pretty tame, in fact coming in lower than the numbers before the recession.

So -- after one round of quantitative easing, we're OK on the inflation front.

But Bonddad! They're going to flood the market with money! The dollar will become worthless! At this juncture, it would be really helpful if the people commenting on Fed policy would stand-up and explain how the Federal Reserve works. Because in doing so, they would immediately prove that they know JACK about what is really going on.

I've explained this before, but it's obvious that people didn't learn. So, let's go over this again (however, there will be BIG WORDS that you might have to look up):

1.) Yes, the Fed is purchasing trillions of dollars of Federal debt. And, yes, this is probably a primary reason for lower interest rates. And, yes, this has led to an increase in the monetary base, or:

In economics, the monetary base (also base money, money base, high-powered money, reserve money, or, in the UK, narrow money) is a term relating to (but not being equivalent to) the money supply (or money stock), the amount of money in the economy. The monetary base is highly liquid money that consists of coins, paper money (both as bank vault cash and as currency circulating in the public), and commercial banks' reserves with the central bank

So yes, the monetary base is increasing. In fact, it has increased substantially, as demonstrated by this chart: 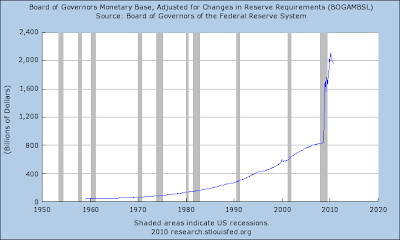 BUT THAT IS HALF OF THE STORY. In order for that chart to lead to inflation, banks have to lend out the money. And loan demand is weak, leading to an overall decrease in loans: 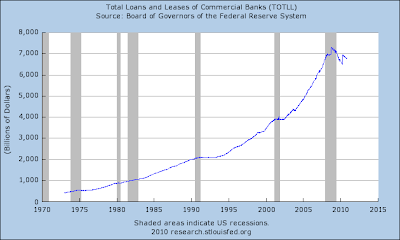 However, let's confirm that fact and look at a picture of money supply, specifically, MZM, which is:

MZM has become one of the preferred measures of money supply because it better represents money readily available within the economy for spending and consumption. This measurement derives its name from its mixture of all the liquid and zero maturity money found within the three "M's." 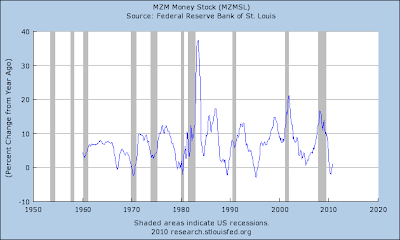 The above chart goes to 1960. Notice that the current rate of the year over year percentage change is barely positive. In other words, this is not inflationary. In addition, notice that MZM's velocity is near 40 year lows: 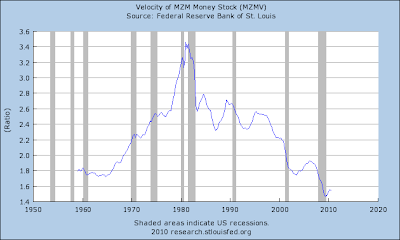 This means that money is moving through the market really slowly -- as in at nearly the slowest level in the last 40 years.

In other words, the fear from Mike Pence and his uneducated bunch of yahoos is baseless, groundless and completely devoid of any connection to reality.

BTW -- if you want to really learn about this stuff, read a pamphlet titled Modern Money Mechanics (PDF).

It's a really good read. And if you read it, you'll be many steps ahead of most idiots in Washington.