The dollar broke trend yesterday (c), breaking a strong uptrend that has been in place for the last ten days. While the uptrend is over, it's important to remember why this rally happened: the dollar is still seen as a safe haven currency.

The equity markets gapped higher at the open (a), rallied in the early part of trading (b), then consolidated their gains for most of the day (c). Prices moved a bit lower at the end of trading (d), but not enough to really threaten the rally's gains.

I wouldn't be surprised to see equity prices consolidated between lines (a )and (b) on the top and (c) on the bottom.

The Treasury market has broken trend (a). Also note the EMA picture is becoming more and more bearish -- the 10 and 20 day EMAs have moved through the 50 and all are moving lower. 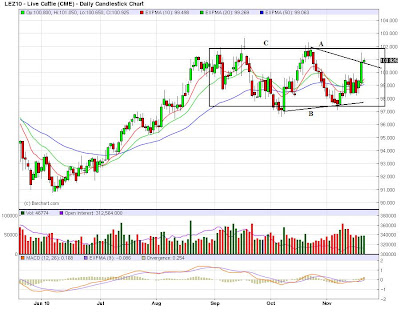 There are two ways to look at the chart for cattle. The first is as a triangle consolidation (A and B). The second is as a sideways consolidation between roughly 97 and 102. I would prefer the latter, largely because it has been going on for longer and it more closely resembles the EMA picture. However, it would be possible that both are correct; it simply depends on your time frame. 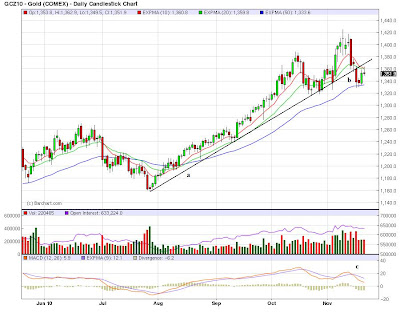 Gold finally broke the long-term trend line (a) at point (b). Also note the MACD is printing a sell signal right now (c).
Posted by Unknown at 6:21:00 PM