Yesterday and tomorrow we get a great deal of information about the US economy. Yesterday the Federal Reserve published the Beige Book and tomorrow we get the first GDP estimate for the 2nd quarter. This is therefore a good a opportunity to take a look at a wide swath of macro-level data to see exactly where we are.

Here is the report's summary:

Manufacturing activity continued to expand in most Districts, although several Districts reported that activity had slowed or leveled off during the reporting period. Districts also noted improved conditions in the services sector. The five Districts reporting on transportation noted increased activity. Tourism activity also increased across the Districts, although the Atlanta District noted concerns about decreased leisure travel to the Gulf Coast. Retail sales reports generally indicated a continued rise in spending, and several Districts noted that necessities continued to be strong sellers, while big-ticket items moved more slowly. However, most Districts that reported on auto sales noted declines in recent weeks. Activity in residential real estate markets was sluggish in most Districts after the expiration of the April 30 deadline for the homebuyer tax credit. Commercial real estate markets, especially construction, remained weak. Banking conditions varied across the Districts, with some Districts noting soft or decreased overall loan demand; credit standards remained tight in most reporting Districts. Recent rains had mixed effects on crop conditions, while activity in the natural resources sector increased. Overall labor market conditions improved modestly across the Districts, with several reports of temporary hiring. Consumer prices of goods and services held steady in most reporting Districts. Input prices also held largely steady, with only a few reports of cost increases. Wage pressures continued to be contained on the whole.

So, the general trend is for an increased, albeit at a slower pace than before. While there is growth, it is "modest" and several districts reports a slowing trend.

Let's take the report section by section and then add some information as appropriate.

Manufacturing activity in most Districts continued to move up since the last report, although the pace of activity slowed or activity leveled off in the New York, Cleveland, Kansas City, Chicago, Atlanta, and Richmond Districts. Automobile manufacturing was a bright spot for the Cleveland, Chicago, and St. Louis Districts. Automobile parts suppliers also experienced increased demand in both the Richmond and Chicago Districts. Fuel demand at refineries in the San Francisco District improved, while gasoline demand was steady in the Dallas District. Firms in the semiconductor manufacturing industry reported relatively strong sales or demand growth in both the Boston and San Francisco Districts. Firms in aircraft and parts manufacturing saw sales pick up in both the San Francisco and Dallas Districts. Manufacturing firms in the Boston, Philadelphia, Kansas City, and Dallas Districts were optimistic that demand would continue to improve in the following months. However, Cleveland's contacts expect demand growth to taper off, Philadelphia noted that the balance of positive over negative views had narrowed, and Atlanta reported fewer firms planning expansions in production. Richmond, Chicago, and Dallas reported that firms in construction-related manufacturing experienced weak demand; construction supplies sales were flat in Kansas City, and Minneapolis reported that a firm in the sector was increasing production. Steel production declined in both the Chicago and Cleveland Districts. Some manufacturers in the Atlanta and San Francisco Districts reported high excess production capacity. Capacity utilization was below pre-recession levels in Cleveland and edged lower among steel producers in Chicago.

Manufacturing was one of the first areas of the economy to turn around. However, we are now seeing a slowdown in some areas. Let's take a look at some of the data: 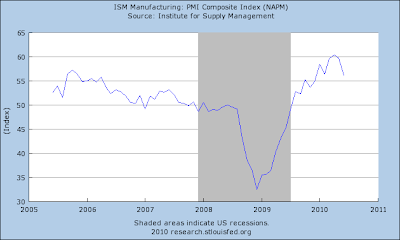 While the ISM index is still increasing, it has moved lower over the last few months. However, the reading is still above 50, indicating an expansion of the manufacturing sector.

The NY Empire state index dropped last month, but it is also still in an area of expansion. 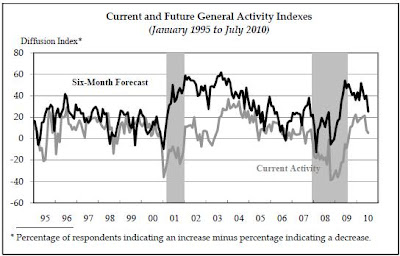 The Richmond Fed's manufacturing index also dropped last month (it's obscured by the 3-month line). However, like the other regional indexes, it is also still positive.

The Texas index is also just above 0, but still positive. 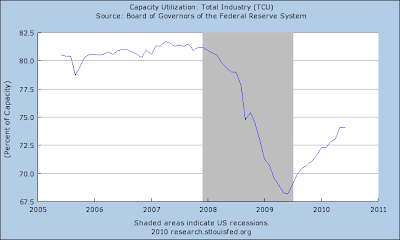 So, the latest data point of a slowdown in manufacturing. The regional indicators all moved lower. But this is one month of data and the indicators are still positive.

Unfortunately, there aren't as many service indicators as manufacturing. Here is a chart of the ISM non-manufacturing index:

Last month it dropped after three months are more or less the same level. It could be topping out, but we don't know if it will stay at this level or move lower.