Labor market conditions improved gradually in several Districts. New York, Chicago, Minneapolis, Richmond, and Atlanta all reported that labor markets improved, albeit modestly in some cases, while Boston and Dallas reported that employment was steady. Philadelphia, Atlanta, Richmond, Chicago, and Minneapolis reported that temporary employment experienced increased demand. Contacts in the Philadelphia, Atlanta, Dallas, and San Francisco Districts said that they continued to rely on temporary staff over permanent hires. Cleveland, Richmond, and Chicago saw hiring in the manufacturing sector. Cleveland also reported some new job openings in the healthcare industry. Boston and Cleveland noted that firms in some services industries were hiring mostly for replacement. Dallas reported that firms in the energy industry experienced significant regional layoffs as a result of the deepwater drilling moratorium. San Francisco noted continued high levels of unemployment and limited hiring. 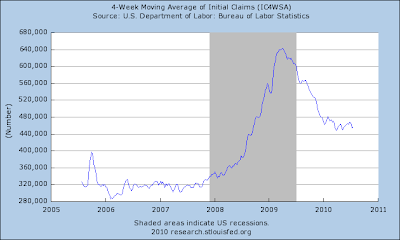 The 4-week average of unemployment claims (which does not include today's data) dropped starting mid-last year, but has moved sideways since the beginning of the year. This behavior occurred in the last two recessions. 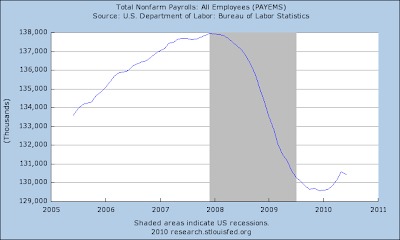 Establishment job growth has bottomed, but is still weak. 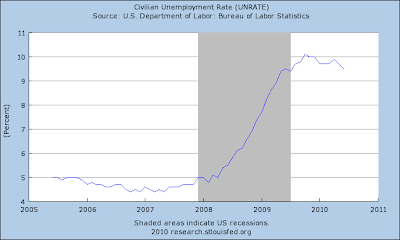 The unemployment rate is still elevated (which also occurred after the end of the last two recessions. See the link above).
Posted by Unknown at 3:00:00 PM