The combination of growing confidence in Europe’s economy and mounting evidence of a slowdown in the U.S. is driving euro bears into hiding.

After tracking the euro’s slide from about $1.45 at the beginning of 2010, the median forecast of currency strategists has stayed within two cents of $1.20 since the start of June, according to data compiled by Bloomberg. Goldman Sachs Group Inc. and Wells Fargo & Co. raised their estimates in the past two weeks, joining HSBC Holdings Plc and Deutsche Bank AG in predicting a stronger euro.

While the euro weakened 15 percent in the first half as the region’s debt crisis threatened to tear the currency union apart, investors have shifted their focus to the U.S. as the dollar depreciated 8 percent from a four-year high in June. U.S. economic data fell short of economists’ estimates this month by the most since March 2009, while euro-region reports exceeded forecasts since April, according to Citigroup Inc. indexes.

“People got a bit too excited about the idea the euro-area was going to break up and forgot that the U.S. has a whole load of problems of its own,” said David Bloom, global head of currency strategy at HSBC in London, who has predicted since the start of June that the euro would end the year at $1.35.

Confidence in the euro returned after the most-indebted countries in the region announced budget cuts and the European Union crafted a 750 billion-euro ($970 billion) financial backstop in May to forestall defaults. Spain, Portugal, Ireland and Greece successfully auctioned more than 17 billion euros of bonds and bills since July 13.

Speculation the recovery would accelerate increased when Germany’s Ifo institute said July 23 that its business climate index unexpectedly jumped to the highest level since July 2007. A composite index of European services and manufacturing industries climbed to 56.7 in July from 56 the month before, London-based Markit Economics said a day earlier.

Some data points that I was not able to get to last week were from Europe. The points are highlighted above and they show a stronger recovery in the euro area, leading to an increase in the euro. 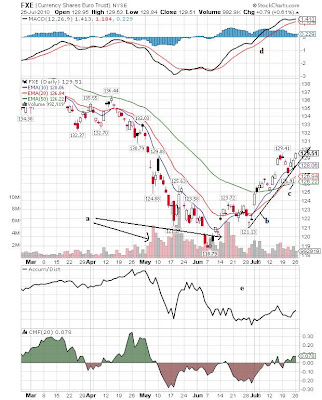 The euro has clearly rebounded. First, notice the ETF hit a high volume selling peak in May and June (a). Prices have since reversed and are now in an uptrend (b). The EMA picture is bullish (c) with all shorter EMAs rising and the shorter above the longer. Momentum has increased (e) but we haven't yet seen a big volume rush into the security (f). 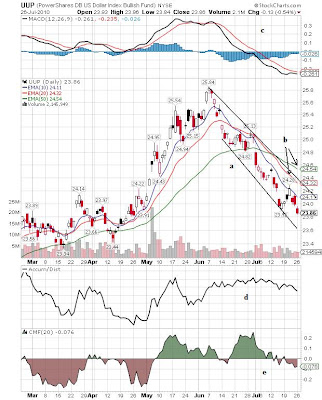 In contrast, the dollar is dropping and is in a clear downtrend (a). The EMAs are in a very bearish orientation with the shorter below the longer and all moving lower (b). Momentum has clearly moved lower (c). However, we are just beginning to see a drop in participation (d and e).