Yesterday, prices gapped slightly higher at the open, but made onoe of their biggest moves when new home sales were released. Prices spent most of the day in a tight trading range with the EMAs. Prices sold off a bit (d) in the early afternoon, but there was no strong volume spike associated with the drop. Prices recouped their losses in an end of the day rally (e) on strong volume (f).

The SPYs advanced strongly above the 200 day EMA.

Also note the IWMs and QQQQs moved through key resistance levels (a), confirming a rally.

The transports have also broken through resistance (a.)

On closer look, the transports EMAs are starting to line up in a more bullish posture. The shorter (10 and 20) are rising and the 10 has just moved through the 50, while the 20 is about to. Notice that over the last few days, prices have printed several strong bars (b) on increasing volume (c).

The long-end of the Treasury curve is still below its trend line (a). 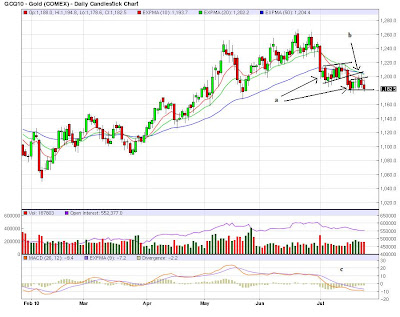