Reports on retail sales during the early summer months were generally positive, although in most Districts the increases were modest. Retail sales in the New York, Philadelphia, Minneapolis, and Kansas City Districts were higher than year-earlier sales, and Dallas reported solid gains. But sales in the Boston District were mixed compared with the previous year. Recent sales increased slightly in the Cleveland, Atlanta, Chicago, and San Francisco Districts; sales in the Richmond District weakened; and sales in the Kansas City District were flat compared with the previous report. Several Districts cited apparel, food, and other necessities as recent strong sellers, while big-ticket items were weak sellers. Contacts reported satisfactory inventory levels in the New York District, mixed inventory levels in the Boston District, and low or declining inventory levels in the Richmond, Atlanta, and Chicago Districts. The outlook for sales was mixed: Retailers in the Philadelphia, Cleveland, Kansas City, and Dallas Districts reported that they expect modest positive sales growth in the upcoming months; contacts in the Cleveland, Atlanta, and Chicago Districts reported a less optimistic outlook going forward than in the previous report; and retailers in the Boston District reported a cautious outlook.

The Districts that reported on auto sales during the early summer months generally noted a decrease in recent sales. Since the previous report, auto sales in the New York, Philadelphia, Cleveland, Richmond, Chicago, and San Francisco Districts declined, while auto sales in the Kansas City District increased and were unchanged in the Dallas District. Compared with last year, auto sales in the Atlanta and St. Louis Districts were higher. New York, Philadelphia, Cleveland, Chicago, Kansas City, and Dallas all reported that inventory levels were low or declining. Auto dealers anticipate little change in sales for the rest of 2010 in the Philadelphia District and expect sales to increase slowly in the Dallas District. Contacts in the Kansas City District expect continued strong demand, while those in the Cleveland District do not anticipate strong growth in the coming months. 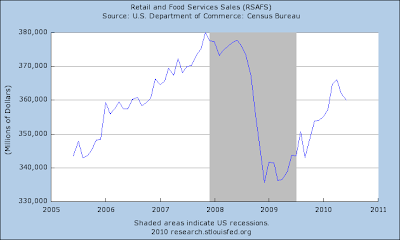 Real retail and food service sales are in an uptrend, although they have moved lower for several months. 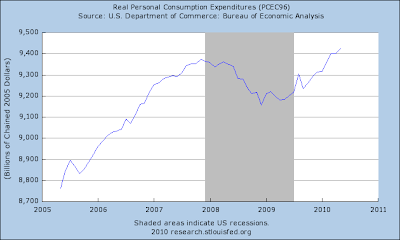 Real personal consumption expenditures are increasing and are now higher than their peak in late 2007/early 2008. 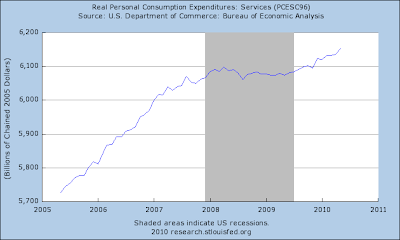 Service expenditures comprise the largest percentage of PCEs. These moved sideways during the recession, but are now moving higher at a subdued pace. 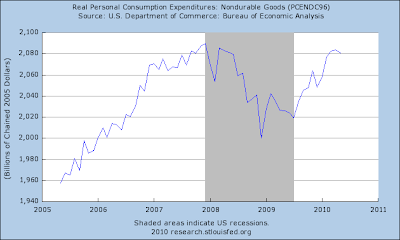 Real expenditures on non-durable goods are increasing and are just below their peaks in late 2007. 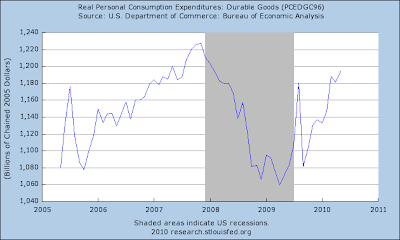 Durable goods purchases are also increasing, although they are below their peaks of late 2007. 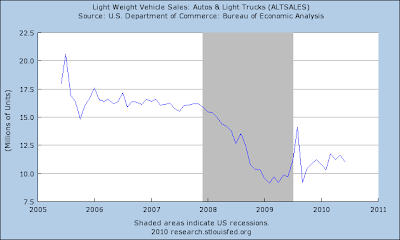 Auto and light truck sales are moving slightly higher, but are still at incredibly low levels.
Posted by Unknown at 1:30:00 PM