Thursday Oil Market Round Up

First, an update on yesterday's "Today's Market" post. For reasons unknown to me, my daily charts did not fill in the late in the day price action. As a result, my IWM and QQQQ chart were inaccurate. I will check to see what caused this and am sorry for any confusion. 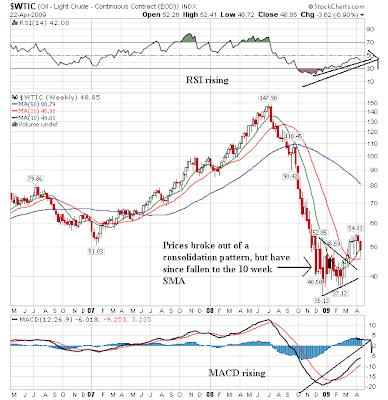 The weekly chart shows that prices dropped hard at the end of last year. Then they consolidated the losses for the first three or so months. Prices then broke out of the triangle consolidation pattern. Note that before this happened there was a rising MACD and RSI. However, prices have since fallen back to the 10 week SMA, although the RSI and MACD are still in a bullish configuration. 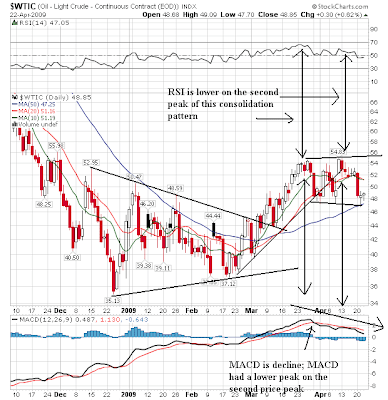 The daily chart shows the action in more detail. Prices rallied from the middle of February to the end of March but have since moved sideways. However, notice the MACD and RSI have printed a lower number on the second price peak in the consolidation pattern, indicating a weakening of the trend. Also note the prices and the SMAs are in a tight pattern indicating a lack of direction in the overall market.

Fundamentally we are still in a vastly oversupplied market:

This is probably one reason keeping prices at the pump subdued:

For more on oil, gas the economy, read this article from New Deal Democrat
Posted by Unknown at 6:36:00 AM