A Closer Look At GDP

I've been very concerned about the market/fundamental relationship lately. As a result, I'm going to spend some time this week looking at GDP. First, let's look at a chart of chained GDP: 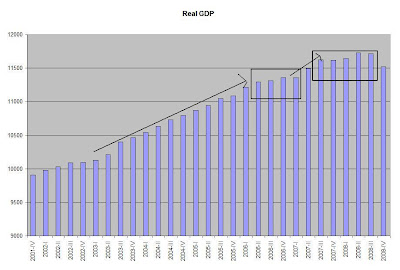 The above chart tells us some incredibly important information. Notice there was a long period of growth from 1Q03 to 1Q06 -- three year of growth. Yet then the trajectory of growth changed from a nice continual rise to a slight stall. Notice the from the 2Q06 to 1Q07 growth was a lot slower. This was followed by growth from the 1Q07 to 3Q07 when growth again plateaued. The recession officially started in 4Q07, but the chart tells us we should have been concerned by 4Q06. In other words, actual growth was slowing before we hit the recession.

Let's break the information down into smaller parts. GDP is composed of 4 sub-categories. Here is a list of the categories along with each categories percentage of GDP

So -- people buying and selling stuff is still the most important category of spending. Let's break that down into sub-categories and each sub-categories percentage of overall chained GDP:

So -- in order of importance we have, services, non-durable goods and durable goods. Here are three charts which show each category as a percentage of chained GDP: 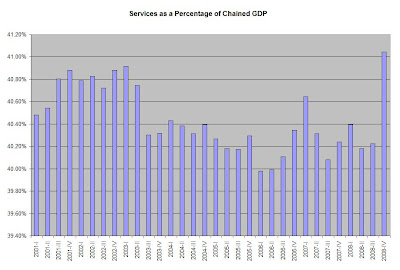 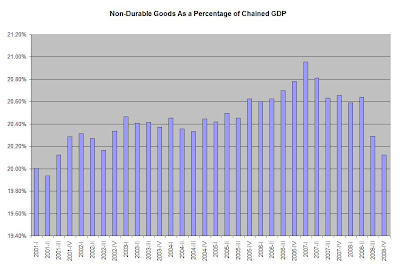 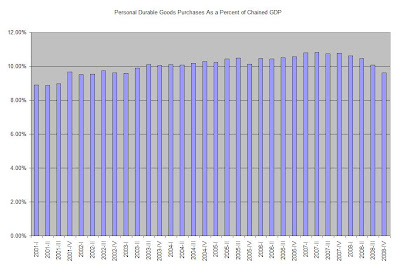 Pay particular attention to the scale on the left side: each category moved at the most a few percentage points over the last expansion. In other words, people spend about the same percentage on the various items.
Posted by Unknown at 6:59:00 AM