One of the better econometric models that I made use of back in 2016 was that by Prof. Robert S. Erickson of Columbia University and Prof. Christopher Wlezien of the University of Texas at Austria, entitled “Forecasting the Presidential Vote with leading economic indicators and the polls”

The model takes two steps. First, average the head-to-head heats by the two major candidates during the first quarter of the election year. Second, apply the result of the Index of Leading Indicators at the end of the first quarter to that average.

Applying this econometric approach to the 2020 election is very unfriendly to Donald Trump, to say the least. In all of the recent head-to-head match-ups with Joe Biden, Trump trails.

But worse is - well, here’s a look at the Index of Leading Indicators as it stands after March’s figure of -6.7% - the worst monthly decline ever recorded - was reported this morning: 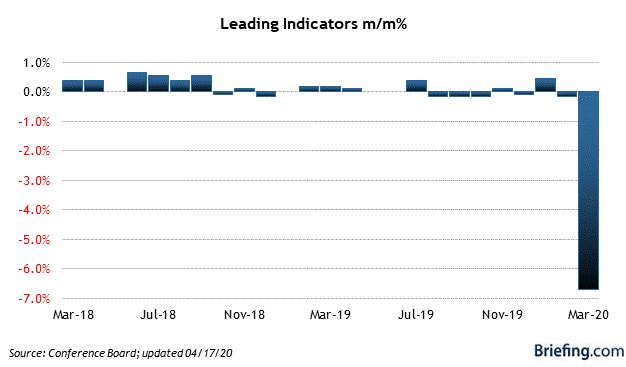 Even before the March catastrophe, only 3 of the previous 10 months had been positive numbers. Essentially the index was treading water. As of now, it suggests that the next 4 to 8 months of the economy are going to be the worst since the Great Depression.

Voters are not going to blame Trump for the existence of the coronavirus, or the necessity for at least briefly shutting down the economy in order to halt the virus’s exponential growth. But they certainly can blame him for not acting fast enough, for his incoherence, and for his interference with States’ actions to ameliorate the situation. More succinctly, one or two months of awful news due to a natural catastrophe might be tolerated by voters. But if the awful news continues into the 3rd and maybe even 4th quarter — and the LEI suggests that it will do so for the next few months at least — voters are going to be extremely unforgiving.

At a feral level Trump knows this. That’s why he is left with a “Hail Mary” pass, hoping that if the economy is “opened up” in May the virus will miraculously abate, and that if it doesn’t, he can blame others.
Posted by New Deal democrat at 12:15:00 PM