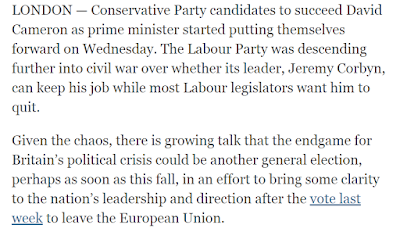 Mario Draghi on the Global Dimension of Low Inflation (ECB)

Indeed, a growing literature suggests that globalisation has created a common factor in inflation developments, which goes beyond fluctuations in energy or commodity prices. Higher import volumes have increased the importance of international prices and wages relative to domestic ones, making the global output gap more relevant.[1]

In that context there are two types of factors that are significant for the global low inflation environment we face today: more cyclical factors that have put downward pressure on prices; and more structural factors that have lowered the equilibrium real rate and slowed down the response of the economy to monetary policy.

The first type of factors includes the large negative output gaps generated by the financial crisis and its aftermath, which still average 1% among G7 economies today.[2] This global slack has dampened in particular import and producer price inflation, both of which have been weak for several years among advanced economies. Prices set by producers in the euro area and those set by producers in trading partner countries are indeed highly correlated.[3]

Also depressing global inflation has been the slump in demand for energy and commodities linked to the slowdown in emerging markets. This has fed not just into lower headline inflation, but also into lower underlying inflation through its effect on costs and imported prices. Indeed, if one decomposes inflation for the average advanced economy, one finds that since mid-2014 there has been a notable rise in the global component, linked largely to oil and commodity price falls.

That low interest rate environment is a consequence of a global excess of desired saving over planned investment, which results from rising net savings as populations plan for retirement; from increased demand for and lower supply of safe assets; from relatively less public capital expenditure in a context of slowing population growth in advanced economies; from the secular shift from industries intensive in physical capital to those more intensive in human capital; and from a slowdown in productivity growth that reduces returns on investment

Daily Chart of the IEV, the Europe Tracking ETF 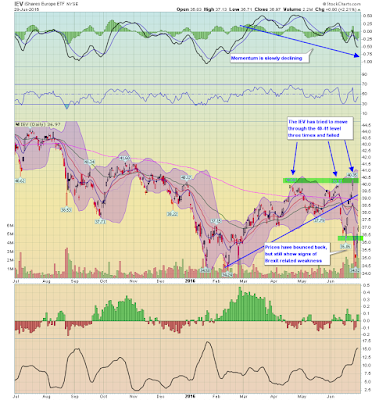 12-Month Bar Graph of the Monthly Change in PCEs (FRED)