Good news and bad news from the gas and commodity front


The good news is, it appears that gas prices have peaked for the summer (h/t GasBuddy):

Perhaps just as good, the YoY% changes in gas prices have been roughly stable at about -15% in the last few months:

This suggests that gas prices still haven't hit a secular bottom -- which is great for US consumers (and probably showed up in this morning's good report on personal spending).

The bad news is, resource extraction states are still taking it on the chin.  With the last two reports in this week for June, here's what the regional Fed manufacturing new orders indexes look like:
These are very volatile.  For example, two months ago Richmond was at +18!  But the less volatile average, which was positive in March and April, has now returned to being negative for two months in a row.  I am still of the opinion that the shallow industrial recession centered on commodities is ebbing, as this longer term graph of the average of the 5 Fed indexes shows (h/t Calulated Risk): 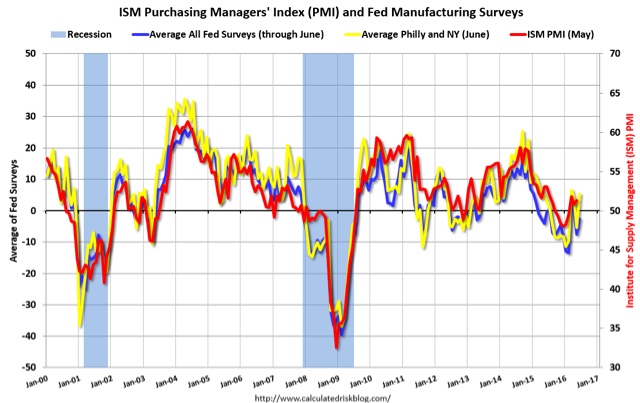