I caught this over at Zero Hedge.  Since I can't find the original source online, it apparently started out in a private presentation by Dominc Konstam of Deutsche Bank.

It purports to show a "modified" yield curve that takes into account the fact that Fed funds are stuck at or near the zero lower bound, and this "modifieid" yield curve shows we are at near 50% risk of a recession.  Here's the graph: 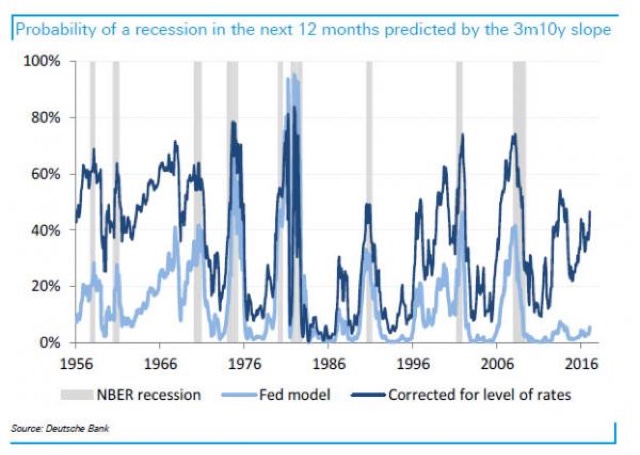 Yesiree, it certainly does show that.

It appears to be close to an inverstion of the difference in the 10 year vs. 5 year yield on US treasuries, which is similar and shown in red below: 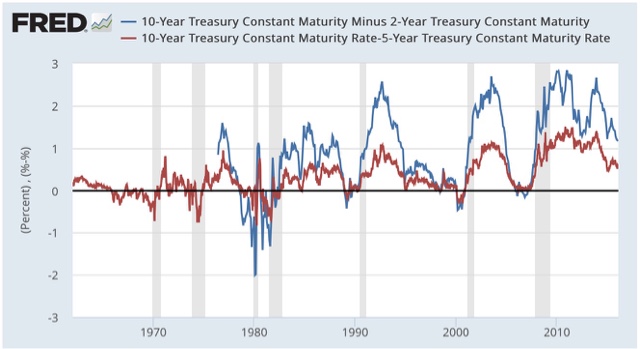 Here's the problem.  Cast your eye to the left end of the graph, the 1960s.  You know, probably the best economy the US has had since, well, forever?  What does the graph show then?

Apparently, the US was teetering on the edge of recession throughout the entire decade.  Hoocudanode?!?

Next look towards the middle. There is the 1990s tech boom, second only to the 1960s as the best US economy of our lifetimes.  Well, apparently the US was teetering on the edge of recession through that period as well!

So here is a helpful hint.  When your Killer App for Foreceasting Recessions, forecast a recession during the two best economies that the US has had in the last 60 years, your Killer App is Crap.
Posted by New Deal democrat at 2:29:00 PM