In a post titled "Talkin' Unemployment Blues" Scott Johnson of the Powerline Blog referenced the following chart from "Shadowstats:"

So, according to Shadowstats, the real unemployment rate is about 22.5%.  This stands in stark contrast to the U6 and U3 rates of unemployment from the BLS: 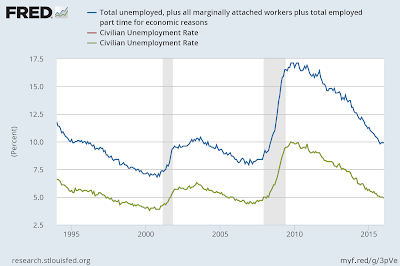 For the sake of argument, let's assume SS is correct.  Wouldn't that mean there could be no wage pressure at all?  At that level of unemployment, employees have, literally, no bargaining power.  An employer could say, "there are, literally, 100 people who will take your job."  Yet, as the following chart from the FRED database shows, wages have increased about 2% Y/Y for most of this expansion.  That pace increased a bit over the last 6-9 months, and is now around 2.5%: 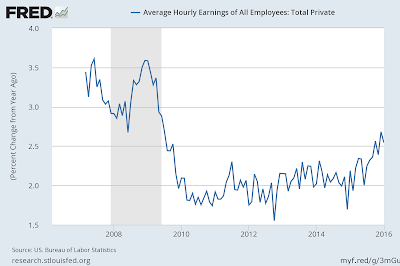 I wonder how Mr. Johnson would explain that rather glaring logical inconsistency?

Here's the point.  The guys at Powerline aren't clueless; that description might imply that, at some point, they had a clue.  No: Powerline's writers are economically clue free.   Over the last few weeks, I pointed out that John Hinderaker -- who is now in charge of a conservative think tank -- thinks Minnesota should change economic policies.  This, when the state's unemployment rate is below 4% and wage gains are between 2.5%-5% Y/Y.  And now Scott Johnson is partially basing his argument on Shadowstats -- a website used by, quite literally, no reputable economist.  And this is before we consider that these guys spent the entire 2014 blog year providing economic commentary that was, literally, 100% incorrect.  That's just dumbfounding.

This post will have no impact on Powerline.  They'll continue to argue that they are economic geniuses.  And we'll be here to document the latest economic missive from the cluefree crowd at Powerline as they post.