The problem with YoY measures, and a compensating rule of thumb


There is a serious problem with simple YoY measures:  they miss turning points.  By the time a YoY measure has changed from positive to negative, or visa versa, the turning point is usually long past.

A good example of this turned up last week in a discussion by Mike Shedlock of jobs reports.  He posted the following graph of the YoY% change in jobs:

Jobs are a horribly lagging indicator. Recessions invariably start with the economy adding jobs as noted by the red squares in the above chart....  The peak of the job losses in most recessions is after the recession is over.

Now, I don't mean to pick on Shedlock.  As I have frequently pointed out, even though I disagree with him at least 80% of the time, I appreciate that he always dives into the data, and makes me think.

But as to jobs, the fact is, especially when going into recessions, they don't lag at all (although they have lagged somewhat coming out into the last 3 "jobless recoveries"). The BLS seasonally adjusts the monthly jobs numbers, and when the monthly seasonally adjusted numbers turn from positive to negative, that almost always coincides with the onset of recession.  Because there is a lot of month over month noise, I have averaged the numbers quarterly in the two graphs below covering the last 60 years: 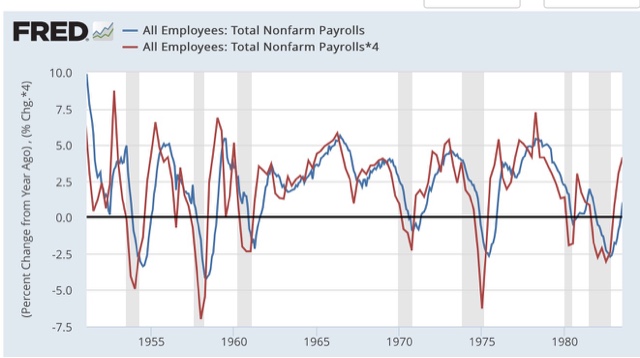 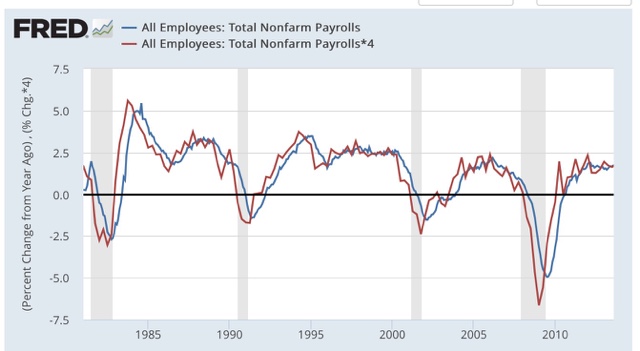 Here is a close-up on the last 2 recessions, with monthly rather than quarterly numbers: 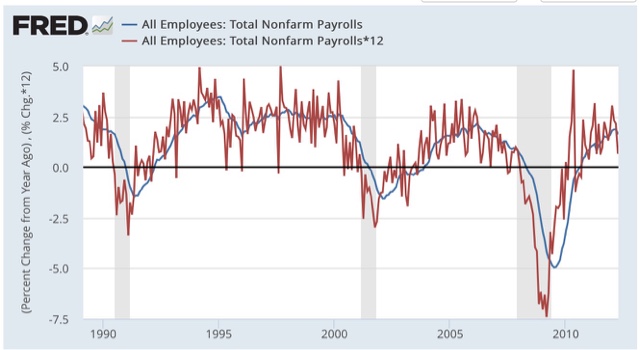 The bottom line is, when we have monthly or quarterly seasonally adjusted data, that is what we should use.  Waiting for a YoY number to turn positive or negative will just cause you to miss the actual turning point.

But frequently there is no choice, because there is no seasonal adjustment.  Most of what I report in my "Weekly Indicators" columns has this issue -- for example, consumer spending measures, the Daily Treasury Report, and rail traffic.

For example, the YoY measure of jobs tends to have inverted U-ish tops, and V-ish bottoms.  Applying my rule of thumb to the last 7 recessions, YoY% job growth declined 1/2 off its high 5 times before the actual onset of recession, with a median lead of +3 months.  The 1/2 YoY% of job grain off the bottom lagged each time, with a median lag of -8 months. (When it comes to jobs, the bottom of the V tends to coincide with the month the recession ends!

Thus recently I have been watching a number of indicators that have turned "less bad:"    rail traffic, steel production, and temporary staffing. I am also watching two that have become somewhat "less good:"  tax withholding and gas usage.

In re rail traffic, I also read an article last week that said we were heading into recession because of the big decline in YoY traffic, using this graph: 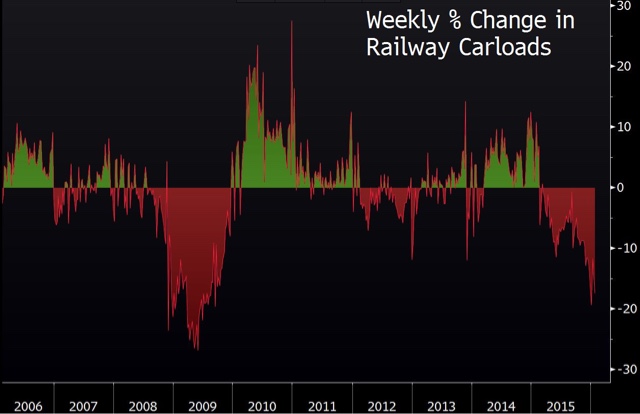 But note that YoY rail traffic bottomed in early 2009. It was about 1/2 the way back towards positive territory by October 2009.  Waiting for it to turn positive meant you would wait until early 2010 (in real time Shedlock made this exact mistake!).  At its recent worst, rail traffic was off about -20% YoY.  If it declines to less than -10% for about a month, that will strongly suggest that the bottom of the industrial recession has been made.
Posted by New Deal democrat at 9:02:00 AM