Let's take a look a the news from last weed, then follow up with the markets.

Manufacturing sub-indexes gave us some good news.  The Dallas Fed's manufacturing index increased to 17.1.  Many of the sub-categories of indicators also increased.   New orders for durable goods increased 3.5%; the total was up .7% ex-transportation.  This figure has increased 3 of the last 4 months, which should help to alleviate the downward pressure we're seen in the manufacturing sector over the last few months.  Finally, the Richmond Fed's index increased 10 points to 8.

Consumer confidence rose to a recovery best: Consumer confidence is at a recovery best, at 81.4 in June and up nearly 7 points from a revised 74.3 in May for the third straight strong gain. The assessment of the present situation is also up for a third straight month, at a recovery best 69.2 which hints at general strength for the slate of June indicators. But the gain here does mask a small uptick in those who say jobs are hard to get, now at 36.9 percent for a 5 tenths increase that does not point to new gains for the June employment report.

Although the Chicago PMI decreased, the internals were very positive: Growth in business activity has slowed sharply this month based on the Chicago PMI which came in at 51.6, down 7.1 points from May. Big moves aren't unusual for this index but a look at the details points to solid growth in the area with new orders coming in at a very respectable 54.6 to indicate healthy monthly growth though down from an outsized 58.1 in the prior month. Production rose solidly, but again at a slower rate, while employment picked up in the month. A big contraction in backlog orders is a negative in the report. Other details include a shortening in delivery times, consistent with slowing conditions, and a slight rise in price pressures for raw materials. Though details are mostly positive, the Dow is slipping in initial reaction to this report which covers all areas of the Chicago economy and not just manufacturing.

The Chicago Fed's National Activity Index's three month moving average decreased:  The index’s three-month moving average, CFNAI-MA3, decreased to –0.43 in May from –0.13 in April, marking its third consecutive reading below zero and its lowest level since October 2012. May’s CFNAI-MA3 suggests that growth in national economic activity was below its historical trend. The economic growth reflected in this level of the CFNAI-MA3 suggests subdued inflationary pressure from economic activity over the coming year.

Only one of the four indicator groups made a positive contribution, although two of the groups did improve.  The only really good news coming from this reading is that a period of subdued economic activity should have minimal inflationary pressures.

First quarter GDP was revised lower, from 2.4% to 1.8%.  Lower readings from both PCEs and imports/exports were the primary reason for the move lower: the increase in personal consumption expenditures (PCE) was less than previously estimated, and exports and imports are now estimated to have decline.

The Kansas City Fed's manufacturing index fell from 2 to -5.   This particular index had fairly severe deterioration in its dub-indexes, most likely due to the several severe weather incidents over the last few months: Production fell at both durable and non-durable goods-producing plants, with food and machinery manufacturing particularly weak. Other month-over-month indexes showed mixed results. The production index dropped from 5 to -17, its lowest level since March 2009, and the shipments and new orders indexes also fell markedly. The order backlog and employment indexes increased somewhat but still remain slightly below zero. Both inventory indexes edged higher after falling in May.

Let's turn to the markets. 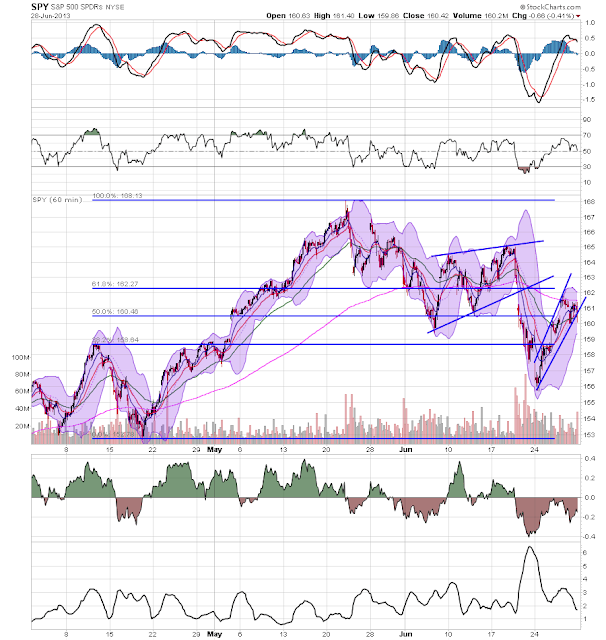 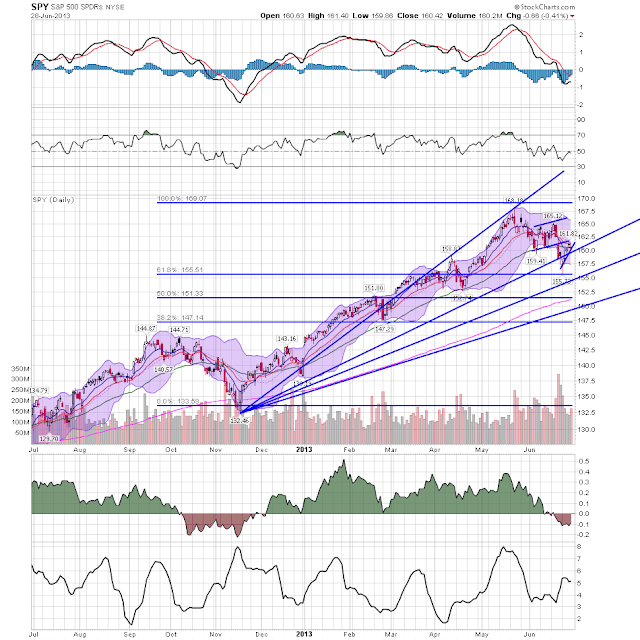 The daily SPY chart (bottom chart) shows that prices are currently using the top Fib fan as technical support.  And while momentum and CMF are clearly negative, the market are hardly falling out of bed.  As the 60 minute chart shows (top chart), we essentially have a situation where the market is dropping, and then rallying on the perceived value play that arises at those lower levels. 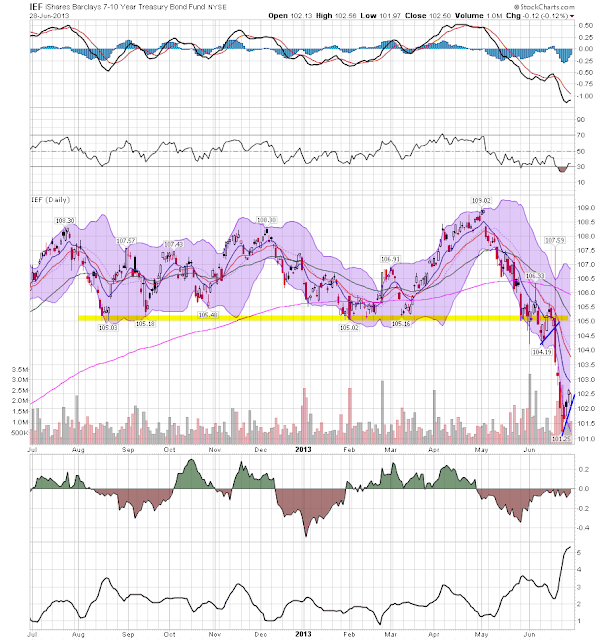 The IEFs have broken through support at the 105 level, fell to ~101 (a drop of about 3.8%) but then caught a bid that hit resistance just below the 10 day EMA.  Momentum is weak and volume flow is negative.  I'll highlight this market later today. 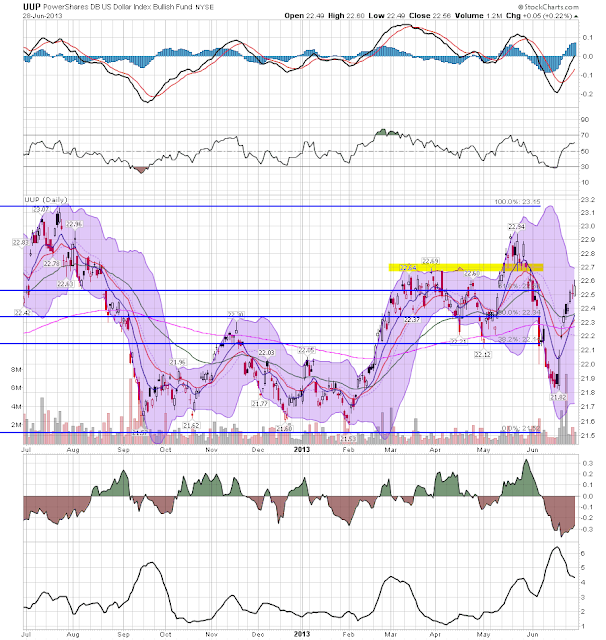 The real story of the dollar is that we're seeing it continue to trade within a broad range between 21.5 and 23.2.  Until we break out of this range, most movement is really just noise.