We've now had a few weeks to digest the Fed's statement that they were thinking of removing the QE program.  Let's take a step back and get an idea for what has happened.

The biggest move has come in the fixed income markets.  As the FT has noted, we've seen a huge sell-off in bonds from both central banks and investors at large:

Holdings of US Treasuries held at the Fed on behalf of official foreign institutions dropped a record $32.4bn to $2.93tn, eclipsing the prior mark of $24bn in August 2007. It was the third week of outflows in the past four.

This is to be expected as the Fed has essentially placed a permanent floor in the bond market for the last three years.  At the same time, it's important to ask if the sell-off is overdone.  First, the Fed hasn't started to taper yet.  And a careful reading of their statement indicates that they may not even do it if the economy slows too much.  Read in light of last week's downgrade of US growth for the first quarter, it's entirely likely that the Fed's plans may already be put on hold.  Also remember the Fed will continue to reinvest principal payments as they come due.

At the same time, let's also remember that Treasury rates are at historic lows, as shown on this chart from the St. Louis Fed: 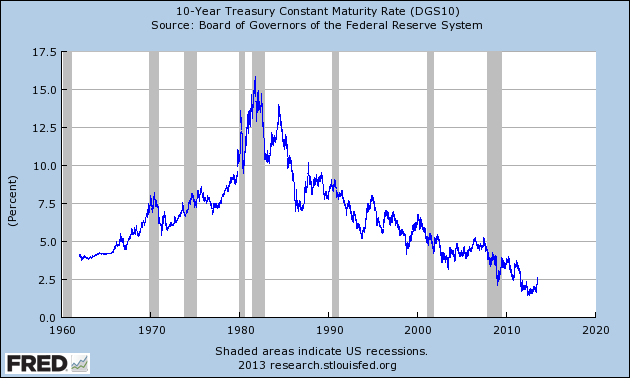 Since the beginning of the 1980, we've had a permanent rally in the fixed income market, essentially taking rates as low as they can conceivable go.  So, at some point, we have to expect the process to reverse.

But just how much of a sell-off can we expect?  Not much, for three reasons.

First, inflation is non-existent.  Here is a chart of the Y/O/Y percentage change in total and core CPI: 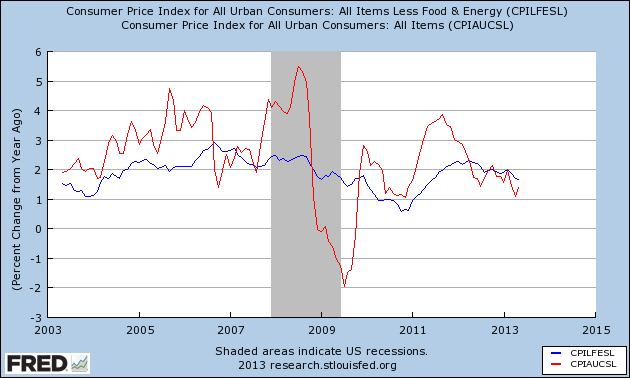 Both core and total inflation are running below 2% on a year over basis.  And with commodity prices under control, China slowing and the EU in a depression, it's highly doubtful we'll see massive price spikes in the near future.  (In fact, we could probably use a little more inflation).

Secondly, the US population is getting older.  The most commonly stated fact to support this statement is that, thanks to the baby boomers, we're seeing 10,000 people retire per day.  As people get older, their' investment strategy becomes more conservative, hence an increase in bond market purchases.

Third, there's still a tremendous amount of uncertainly out there.  While it appears that China has averted a credit crunch for now, their central bank is clearly clamping down on the shadow lending business, which will further clow Chinese growth.  The Chinese slowdown, in turn, is negatively impacting raw materials exporters like Australia and Latin America.  The US is certainly not setting any growth records and Brazil, India and Russia are facing their own set of difficulties.  Put more generically, this is an environment where having a percentage of a portfolio yielding 2.5%-3% is an attractive feature.

While an uptick in yields was bound to happen eventually (and is obviously happening now), the above three reasons should limit the upside increase.