The Jobs report: why aggregate hours are so important

This month was a perfect example. As I noted in my post about this morning's report, the skunk in the garden was the increase in the U-6 rate, and the increase of 322,000 in the number of people who were employed part time for economic reasons (i.e., if there were full time work, they would take it.) Subtracting the 196,000 gain from that number gives us a loss of -126,000 jobs.

As I predicted, it has already made the headlines. Here's Business Insider, reporting on GOP House Majority Leader Eric Cantor's reaction to the report:


Today’s report is an encouraging sign for the working men and women who found a job last month, and those who are still looking. However, earlier this week the White House reminded us once again that its policies have held back the job growth that we should expect from an economic recovery. Obamacare has been predicted to be a drain on employment since before its passage and that outcome was confirmed by the Obama Administration’s delay of the employer mandate. The added costs and regulations to businesses across our nation mean less jobs and less economic growth.

Cantor is wrong, and aggregate hours worked is why. If I have one employee working 35 hours a week, and I replace her with two employees working 25 hours a week, I've actually added 15 hours a week to my payroll. That's what happened this month, as shown in the below graph of the net number of part time minus full time payrolls each month (blue, showing a loss) vs. the percentage change in the number of hours of work in the economy each month (red, showing a gain): 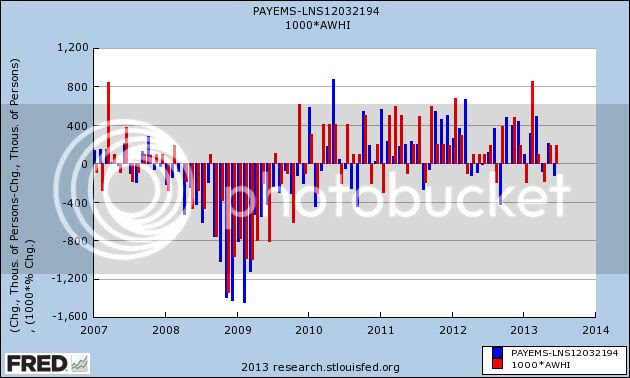 In other words, even taking into account the decline Cantor highlighted, the jobs part of the economy still made gains in June, as it added about 0.2% (or 2.5% annualized) to the number of hours workers were paid for.

And here's an update through June of a graph I've run many times before, showing that while the economy shed about 6% of all jobs during the recession, the cut in hours was much steeper, with the economy losing about 10% of all hours worked. 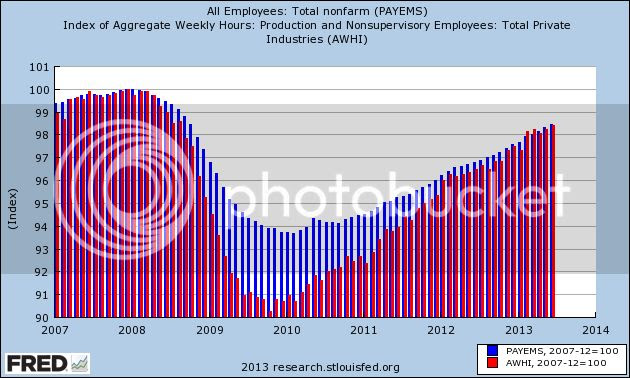 That additional 4% loss in hours had to be made up first before jobs and hours began moving more in sync last year.
Posted by New Deal democrat at 10:10:00 AM