US GDP Pt. I: An Overview

It's been awhile since I looked in detail at the US economy.  As it so happens, over the last few weeks we've had both the most recent Beige Book issued by the Federal Reserve and the latest GDP report from the BEA.  So this week I'm going to delve into US economy data to see just exactly where we are. 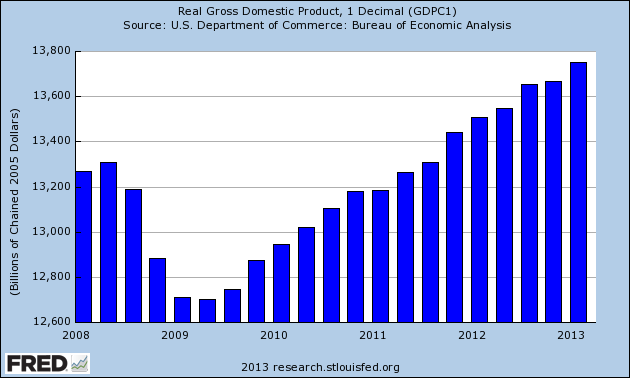 The US economy is growing and has been growing for the last three years.  Currently, on an inflation adjusted basis, GDP is now higher than it was at the end of the last expansion. 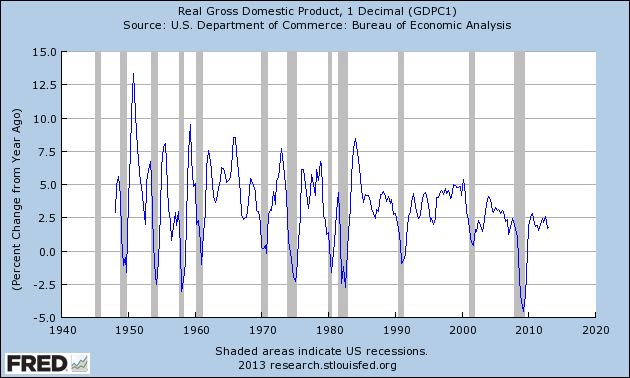 The basic problem is that we're not growing fast enough.  On a year over year basis, the US economy has been growing at between 2%-2.5% for the duration of this expansion.  That's the slowest rate of year over year growth we've seen in the last 50 years.  The slow growth is to be expected, as we're in the middle of a debt deflation recovery.

Assuming, accordingly, that, at some point of time, a state of over-indebtedness exists, this will tend to lead to liquidation, throughthe alarm either of debtors or creditors or both. Then we may deduce the following chain of consequences in nine links: (1) Debt liquidation leads to distress setting and to (2) Contraction of deposit currency, as bank loans are paid off, and to a slowing down of velocity of circulation.  This contraction of deposits and of their velocity, precipitated by distress selling, causes (3) A fall in the level of prices, in other words, a swelling of the dollar. Assuming, as above stated, that this fall of prices is not interfered with by reflation or otherwise, there must be (4) A still greater fall in the net worths of business, precipitating bankruptcies and (5) A like fall in profits, which in a " capitalistic," that is, a private-profit society, leads the concerns which are running at a loss to make (6) A reduction in output, in trade and in employment of labor. These losses, bankruptcies, and unemployment, lead to (7) Pessimism
and loss of confidence, which in turn lead to (8) Hoarding and slowing down still more the velocity of circulation.The above eight changes cause (9) Complicated disturbances in the rates of interest, in particular, a fall in the nominal, or money, rates and a rise in the real, of commodity, rates of interest.
Bonddad is on vacation this week, so I've written some posts in advance that don't require stock charts.

To get an idea for how economists are talking about this recovery, consider this overview of the economy from the latest Beige Book:

Reports from the twelve Federal Reserve Districts suggest overall economic activity expanded at a moderate pace during the reporting period from late February to early April. Activity in the Cleveland, Richmond, St. Louis, Minneapolis, and Kansas City Districts was characterized as growing at a moderate pace, while the Boston, Philadelphia, Atlanta, Chicago, and San Francisco Districts noted modest growth. The New York and Dallas Districts indicated that the pace of expansion accelerated slightly since the previous Beige Book.

The word "moderate" has become the Fed's favorite adjective.