Let's start with a look of the latest LEI release:

Says Ataman Ozyildirim, economist at The Conference Board: “After three consecutive gains, the U.S. LEI dipped slightly in March, with equally balanced strengths and weaknesses among its components. The leading indicator still points to a continuing but slow growth environment. Weakness in consumer expectations and housing permits was offset by the positive interest rate spread and other financial components. Meanwhile, the coincident economic index, a measure of current conditions, is down since December due to a large decline in personal income.”

Says Ken Goldstein, economist at The Conference Board: “Data for March reflect an economy that has lost some steam. In addition to headwinds from government spending cuts, the private sector economy may struggle to maintain its momentum. The biggest challenge remains weak demand, due to nervous consumer sentiment and slow income growth.”

Let's look at the data in more detail, first by focusing on the components:

The biggest contributor is average weekly manufacturing hours.  The assumption here is that more production means strong demand for goods.  This is healthy regardless of the cause -- it doesn't matter if it's strong business demand (fixed investment) or consumer demand (increased consumption).  The ISM new orders index is the next largest component, which also plays into the manufacturing theme: and increase in new orders means increased demand.  Next is consumer expectations.  An increase here indicates the potential for increased consumption, while the interest rate spread tells us about the condition in the treasury market and what traders think about the state of growth.

Overall, the readings over the last 7 months have been positive.  There has been one month with a 0 reading and this month's -.1 reading. 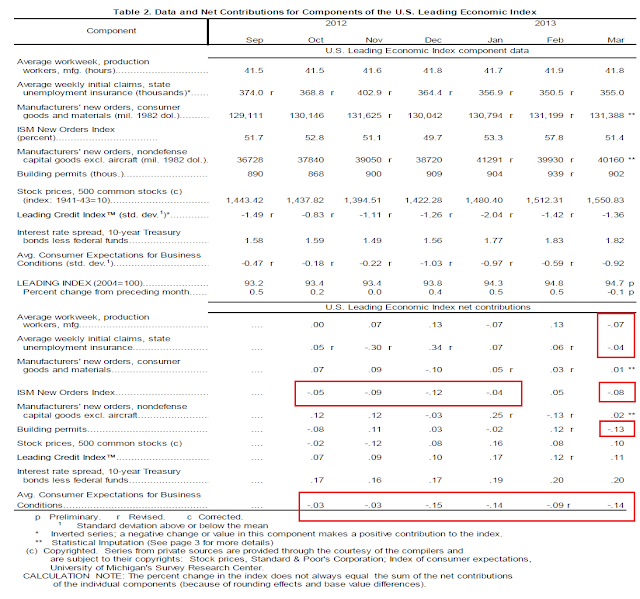 As noted in the press release, 5 components were negative while five were positive -- not exactly the type of readings we'd like to see in this figure.  Also note two things: 1.) the ISM new orders index has printed negative readings in 5 of the last six months and the average consumer expectations for business conditions have been negative for the last 6 months.  Neither of these developments is good.

In addition, we also had the Beige Book release on Wednesday.  Here's the summation from that report:

Reports from the twelve Federal Reserve Districts suggest overall economic activity expanded at a moderate pace during the reporting period from late February to early April. Activity in the Cleveland, Richmond, St. Louis, Minneapolis, and Kansas City Districts was characterized as growing at a moderate pace, while the Boston, Philadelphia, Atlanta, Chicago, and San Francisco Districts noted modest growth. The New York and Dallas Districts indicated that the pace of expansion accelerated slightly since the previous Beige Book.

Most Districts noted increases in manufacturing activity since the previous report. Particular strength was seen in industries tied to residential construction and automobiles, while several Districts reported uncertainty or weakness in defense-related sectors. Consumer spending grew modestly, and firms in some Districts cited higher gasoline prices, expiration of the payroll tax cut, and winter weather as factors restraining sales growth. Retailers in several Districts expect continued sales growth in the near term. Overall vehicle sales remained strong or increased, but sales of used automobiles declined in some Districts. Travel and tourism expanded across most reporting Districts, boosted by both business and leisure travel.

Demand for nonfinancial services increased at a modest pace, and several Districts noted growth in freight and transportation services. Most Districts said residential and commercial real estate improved markedly since the last report. Home prices were rising in many areas of the country. Loan demand was steady to slightly up in most Districts. Reports on agricultural conditions were mixed, as drought or cold weather adversely impacted some Districts while others reported a strong agricultural sector. Oil and natural gas activity remained robust over the reporting period, with contacts in the Cleveland, Kansas City, and Dallas Districts expecting a rise in activity in coming months, while coal production continued to decline.

Outlooks among respondents remained optimistic across sectors and Districts, with growth mostly expected to continue at the same or a slightly improved pace. Some uncertainty remained, primarily regarding fiscal policy and health care reform.

1.) Manufacturing is still growing - always a good sign
2.) The housing rebound appears to be picking up steam.  This is without a doubt the best piece of economic news in the report.
3.) Car sales are still strong -- also a healthy sign for consumers.
4.) The payroll tax cut is dampening demand.
5.) It's always good to hear about freight demand increasing; growing economies always need to move goods from point A to point B.
6.) Once again, we see the word "moderate" used to describe the economy.

For the longest time now, the Federal Reserve has continually used the word "moderate" in the Beige Book reports to describe the current expansion.  And they're right.