On April 2, I posted a piece titled, "Are We At A Short-Term Peak?", where I highlighted a weakening Australian economy.  I noted that the LEIs had peaked and that the Central Bank noted some weakness.  The big issue for the country is that they appear to be rebalancing.  Their economy up until now has been heavily based on mining and raw material exports going to the Chinese juggernaut.  However, with China rebalancing, the raw material capital projects are slowing and the rest of the economy is trying to pick up the slack.

Let's take a look at the market action last week: 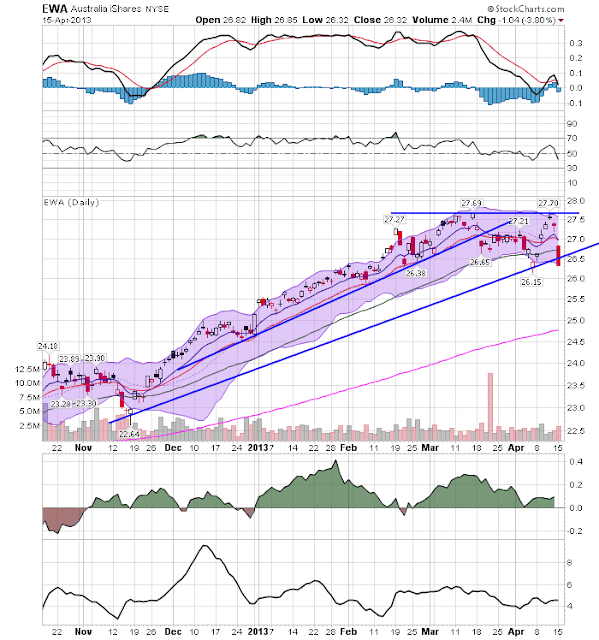 2.) Japan is seriously going after re-flation.  The hope is this will bring back the Japanese economy.  Also note the massive drop in the yen, making Japanese goods more competitive, which should help Australian exports.

3.) Belief in an Australian central bank interest rate cut.  Australia has room to cut rates.  With a weakening economy, there is hope that the bank will do just that.

However. consider this seasonally adjusted data about the Australian labor market released on Thursday:
Also consider these charts from the same report:

We also see a year long increase in the unemployment rate.  While the level is still low (and slightly above "full employment") the trend is still there.

Also consider the LEI and CEIs from the above linked post.  The LEIs are decreasing and the CEIs have stalled.

In short, I still think the Australian market is at a short-term top.  There are a few things that would change that analysis:

1.) A cut by the Australian Central Bank.  This would add upward pressure on a short-term basis.

2.) An announcement from a major raw materials company that they were re-committing to a massive capital project.

However, consider this summation from the just released central bank minutes:

Members noted that the national accounts data, released the day after the March Board meeting, confirmed that growth of the economy was close to trend over 2012 as a whole, but with slower growth over the second half of the year. GDP expanded by 0.6 per cent in the December quarter, reflecting strong growth in resources exports, mining investment and dwelling investment, while household consumption recorded modest growth and public demand declined further. Overall growth over the year was 3.1 per cent, which, with total hours worked recording a small decline over the same period, implied strong growth in labour productivity.

The limited new data to hand for this meeting were broadly consistent with the earlier outlook for the economy. In particular, mining investment still appeared to be close to its peak (and hence its impetus to growth was likely to slow) but resources exports were projected to continue to grow strongly. A moderate rise in dwelling investment was expected and household consumption was forecast to grow broadly in line with household incomes, while growth in public demand was likely to be modest. Non-mining investment was likely to remain subdued in the near term but to pick up gradually in the second half of 2013.

Recent indicators suggested that growth of consumption had increased over recent months after a softer December quarter. The value of retail sales picked up strongly in January and the Bank's liaison pointed to further growth in February and March. Motor vehicle sales had remained high, though they had fallen a little from their recent peak. In addition, measures of consumer confidence had risen to be clearly above their long-run averages.

Members observed that conditions in the housing market had continued to improve. House prices increased again over March, to be 4¼ per cent above their mid-2012 trough, auction clearance rates had moved higher and there were signs of somewhat stronger growth in housing loan approvals. The Bank's liaison with home builders suggested that demand for new housing had been a little more positive of late, with a rise in activity reported in most capital cities.

Surveys of business conditions were somewhat mixed over the month, although conditions generally remained a little below long-run averages. Business conditions appeared to have improved for the construction industry overall but declined in the mining sector, notwithstanding the prospect of strong growth in resources exports. Information from the Bank's liaison indicated some willingness on the part of firms outside the mining sector to increase investment spending, especially on information technology assets and systems. Business debt was still growing, albeit at a somewhat slower pace over recent months; credit to smaller businesses was rising at a steady pace and large corporations were able to access non-intermediated funds.

Members discussed the various labour market indicators. There was a surprisingly large increase in employment in February, accompanied by a rise in the participation rate. However, a substantial part of the increase in employment appeared to reflect changes in the sample. The unemployment rate, which tends to be less volatile than employment growth, was unchanged at 5.4 per cent. While the most recent quarterly data showed a decline in vacancies, higher-frequency forward-looking indicators showed tentative signs of stabilising. Overall, these indicators were consistent with moderate growth in employment in the months ahead.