Market Analysis: The US

Let's turn our attention to the US markets, by first looking at the SPYs.  I prefer these as the benchmark US market because they are far wider and more diversified than the DIAs or QQQs. 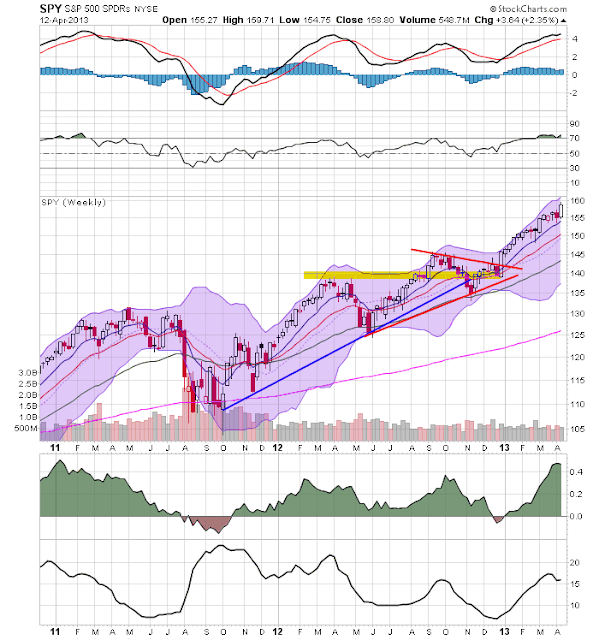 The weekly chart is very encouraging.  We see a triangle consolidation occurring through most of 2012, with prices making a big push through upside resistance a the end of 2012 around the 145 level.  Since then, prices have been in a strong uptrend, with rising EMAs, MACD and CMF.  There have been strong candles (beginning of March and beginning of April) followed by periods of consolidation.  In essence, this is pretty much a bullish chart. 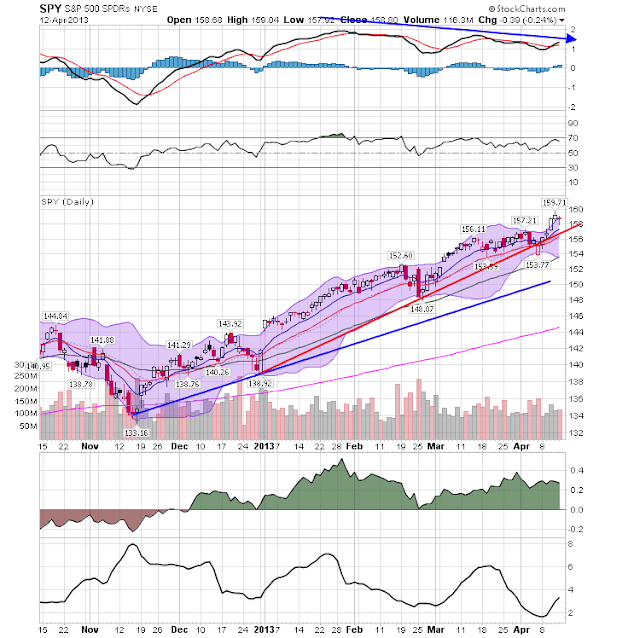 On the weekly chart, we see a rising price trend, strong EMA picture and solid CMF reading.  Prices have moved through resistance on three separate occasions: 144 at the beginning of the year; 152.60 at the beginning of March and 157.2 in April.  However, notice that momentum is slowly decreasing.  It is still at high rates, but the downward trend tells us there is some weakness in the market.

Let's turn to the QQQs 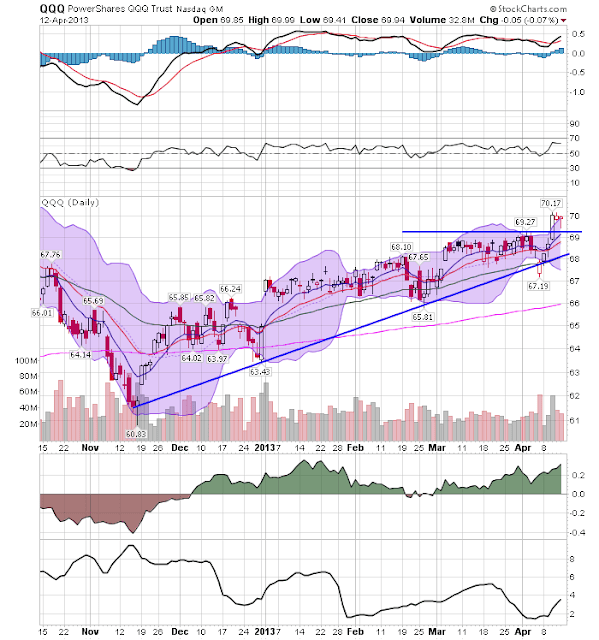 As the daily chart shows, this has been one of the weakest US markets.  While we see an upward movement, we also see a tremendous amount of consolidation -- the market spent most of January and Market moving sideways. 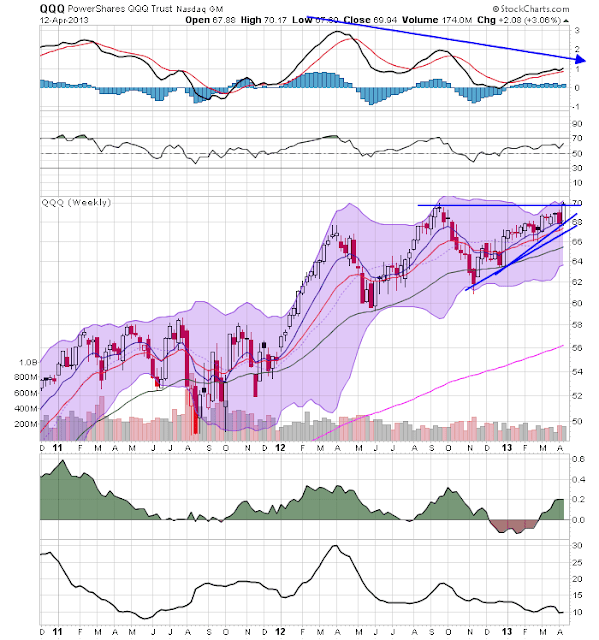 On the weekly chart, notice how the QQQs are just now approaching the period when they are making new highs -- the level right below 70 has proved very difficult to break.  They've been stuck in a downward sloping momentum trend since the spring of 2012.

Let's turn to the IWMs: 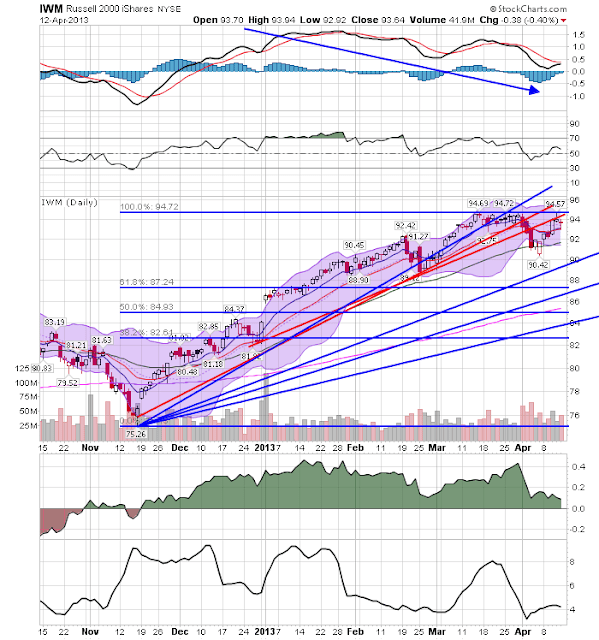 The daily chart has two upward sloping trend lines -- both of which are in red.  Notice that prices have broken both.  In addition, prices are currently using the lower trend line for resistance rather than support.  Finally, notice the decreasing MACD picture along with the declining CMF reading as well.  This is a chart that may be "turning over." 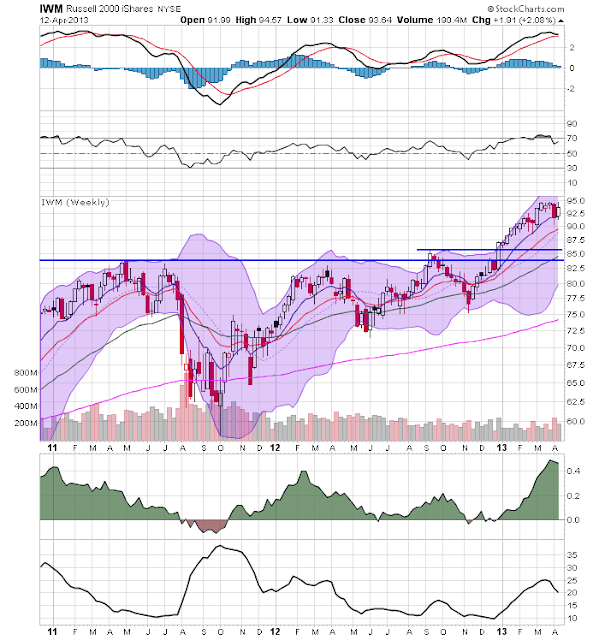 The weekly chart shows that current price action is part of a strong rally that pushed through upside resistance in December around the 86 level, leading the market higher.  This was followed by a strong move by both the MACD and CMF.  However, the MACD is close to giving a sell signal and the upward price movement appears to be stalled around the 94-95 price level.

Finally, let's turn to the DIAs: 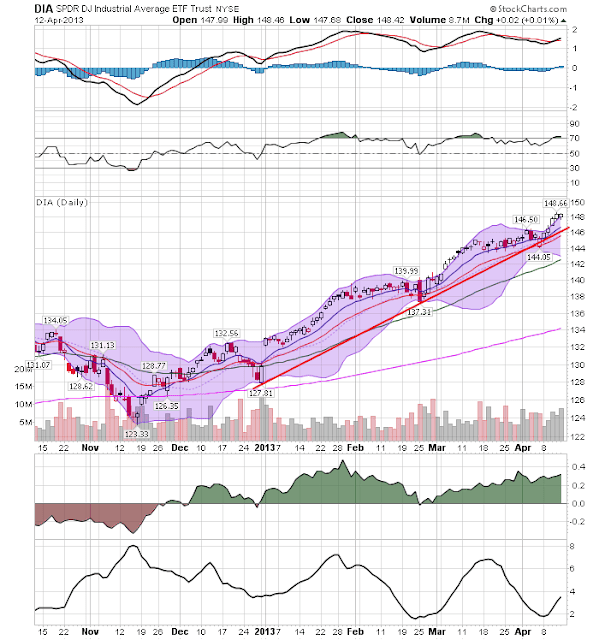 The daily chart shows many of the same traits as the SPYs.  First there is a strong uptrend.  Prices have continually moved  through resistance, first at the 132.5 level in January, then the 140 level at the end of March and the 146.5 level recently.  This has occurred on strong CMF readings, although the MACD is showing some weakness. 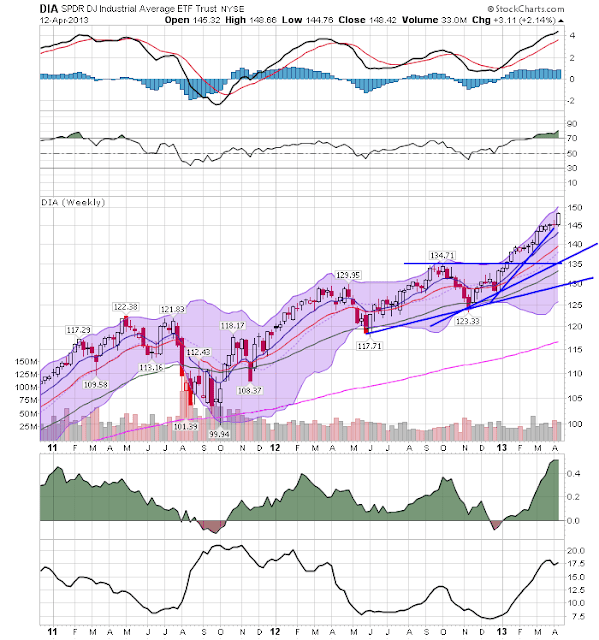 The weekly chart shows the current rally to be very strong.  We see a strong uptrend followed by strong MACD and CMF.  There is also a strong EMA reading.  Also note that this year there are several strong candles indicating good movement during the week.