Let's start with a look at the macro picture, with a table of data from the Central Bank: 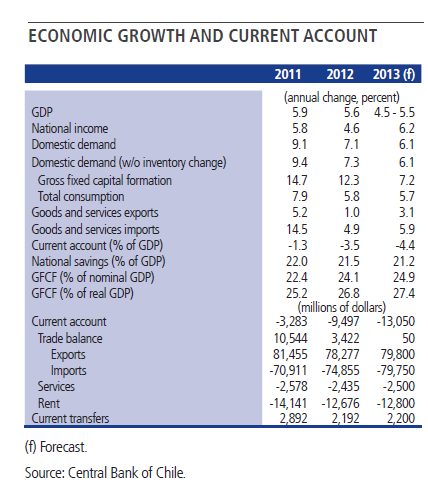 Note the strong reading for various parts of the GDP report for the last two years: GDP growth was strong at 5.9% in 2011 and 5.6% in 2012.  There are strong numbers from domestic demand and investment and total consumption.  The only weak point is the international trade position.  However, for a developing country, a negative current account usually means there's decent domestic demand for various goods. 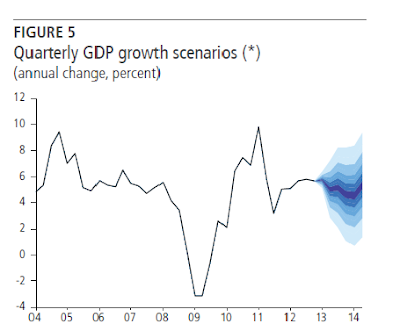 The above chart shows the quarterly change in GDP for the last 10 years.  Notice the strong rates of growth, clocking in at 4% for most of the previous expansion, and then returning to strong growth after the great recession. 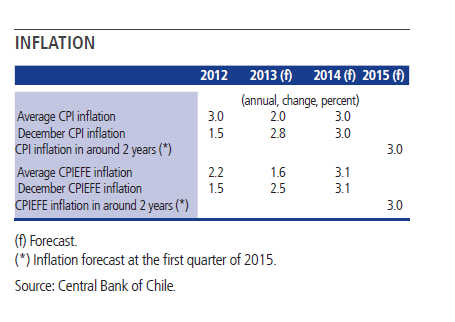 The overall condition of the economy was solid, as expressed in the latest Central Bank Minutes;

Locally, the unemployment rate had declined further and domestic capacity conditions were estimated to be still tight. Output was growing somewhat above trend estimates, driven by domestic demand and especially investment. The recent rebound in private consumption had gone hand in hand with higher labor income growth—reflected in the evolution of employment and wages—, and with the recent drop in CPI inflation.

Meanwhile, household debt had been slowing, particularly in its consumer loans component. The greater demand pressures had manifested in an increase in imports and a wider deficit of the current account, thus moderating its effects on the use of domestic resources and inflation. Core inflation had dropped further for both goods and services, and it was already down to 0.8% annually, while headline inflation was at 1.3% annually. This slow inflation trajectory was worth noting, contrasted with the dynamism shown by domestic expenditure, output and employment. This trend reflected the transitory influence of some recent factors, such as the appreciation of the peso, the normalization of earlier shocks in the prices of some perishables, and the reduction in the stamp tax, but more permanent effects could not be ruled out, such as faster productivity growth. For the time being, the diagnosis remained that this was a temporary phenomenon, which should tend to fade into the horizon projection, but such a hypothesis required further evaluation. Notwithstanding this expected normalization, the recent drops in international food prices and lower regulated utility rates expected for the coming months would lessen the manifestation of this normalization in the short term.

Overall, this report is very encouraging.

So, let's now turn to the charts of the Chile ETF/ 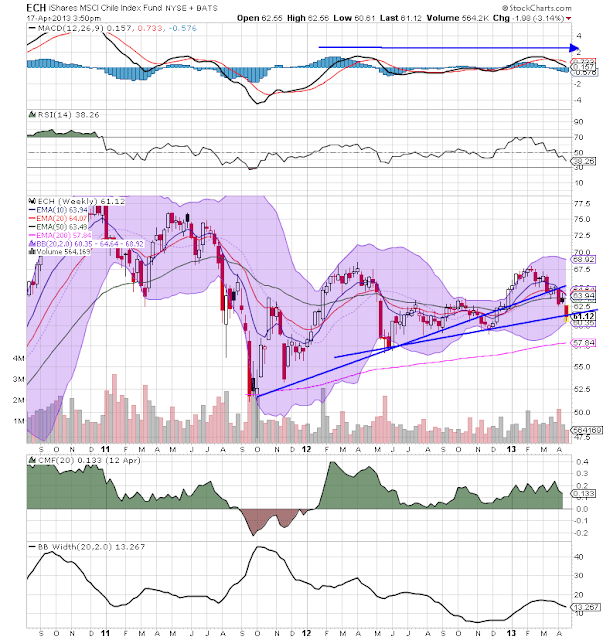 On the weekly chart, the first point to stand out is the MACD.  Notice how it's been right below negative levels for most of the last year and a half.  The current "top" is very close to the "top" from early 2012.  There are two trend lines.  One which starts from the lows of late 2011 that connects to lows from mid-2012.  Prices broke this trend twice, with the most recent break coming a few months ago.  The second trend line connects two lows from 2012.  Prices are right at these levels now. 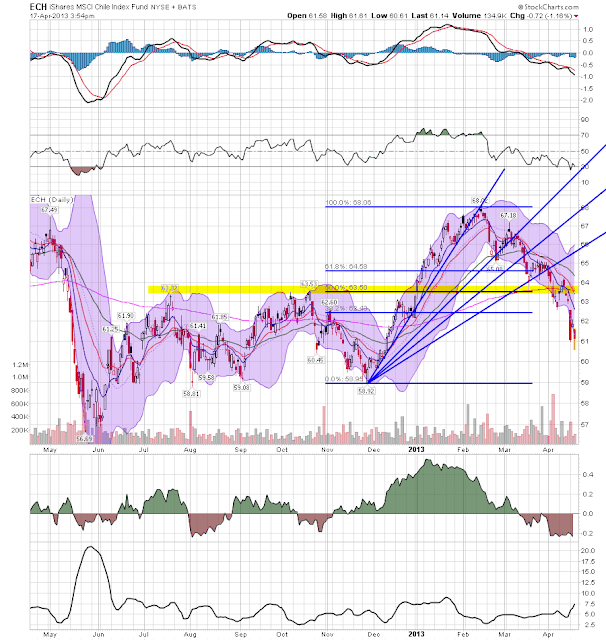 The daily chart shows that prices have been in a downtrend for most of the year.  They've moved through all the relevant fib fans and broken major support just below the 64 price level.  Prices are below the 200 day EMA, indicating bear market territory.  The MACD is declining and in negative territory and the CMF is negative.

So, why is the market declining when the fundamentals of the economy are good?  Chile is a natural resource exporter, heavily dependent on copper exports to China.  Recent news out of China has been bearish (although they're still growing at a strong clip).  In addition, there have been stories about the copper market being over-supplied, meaning Chile's primary export is over-supplied as a whole.