“Inflation expectations have deteriorated by more than a reasonable amount,” Jose Francisco de Lima Goncalves, chief economist at Banco Fator, said in a telephone interview from Sao Paulo before today’s meeting. “The bank is in a tough situation where it’s practically mandatory to respond.”

Both consumer and investor perceptions of inflation have worsened, and their views may be driving down consumption, according to Carlos Kawall, chief economist at Banco Safra SA.

Wednesday initiates what will likely be a new and probably small tightening cycle. The overall tone of the monetary policy committee’s statement was surprisingly dovish, said Marcelo Salomon, an economist at Barclays Capital in New York. The decision to raise rates was split, and the two dissident votes were casted for no hikes (Directors Aldo Luiz Mendes and Luiz Awazu Pereira da Silva).

Moreover, in the statement accompanying the decision, the Central Bank did not bring any decisive strong hawkish sentiments for the market to chew on. While they stated that the high, resilient and disperse inflationary process called for higher interest rates, domestic and especially external uncertainties recommend cautious movements.

Here is the primary problem facing the country:

The inflation rate has been creeping higher for the last year and a half.  As one commenter noted, the bank's hands have been forced by the market.

Also remember that this increase is coming in the face of lower overall growth:

Anytime a central bank raises rates in a declining growth environment, they are very clearly saying they are worried about the direction that prices are taking and that they need to take immediate action to thwart the increase.

Of the international ETFs that I watch on a regular basis, Brazil has been one of the worst performers for most of this year (since January 1, 2013).  Let's start with a look at the broad picture of the last five years: 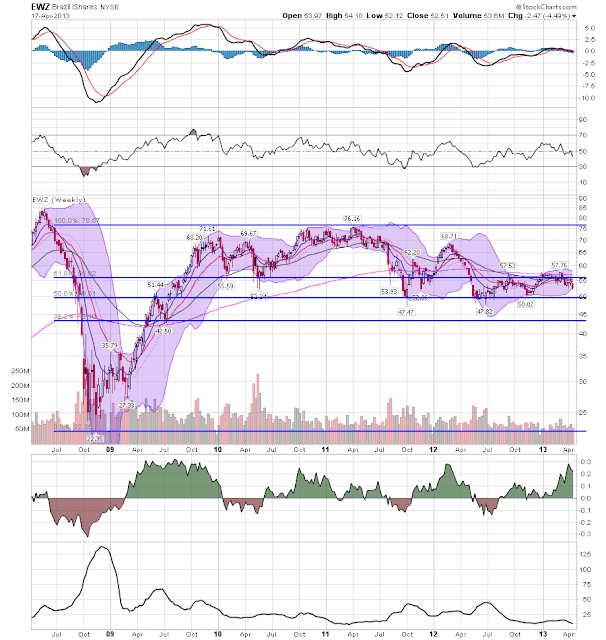 After the big recession sell-off, the EWZ rallied sharply.  At the end of 2009, it was just shy of the its pre-recession heights.  But notice that prices have barely moved higher from that level, three years later.  In 2001, the highest point reached was 71.61.  A little over a year later, we see a price of 76.16 -- a little over 6% higher.  For nearly the last year prices have been trading within the Fib levels established between the 2009 lows and highs for nearly the last year.  Recently, the 200 week EMA is providing tremendous upside resistance.  Finally, the market has had no momentum since the beginning of the year, and weak momentum readings for the last two years. 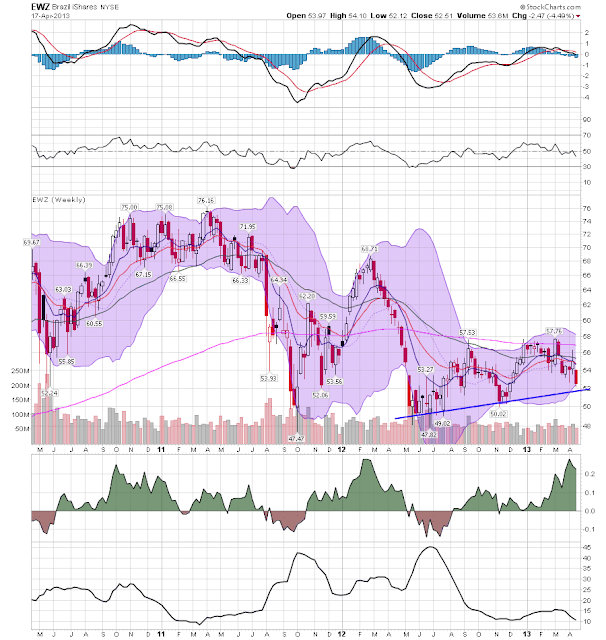 A closer look at the weekly chart shows that prices are near a three year low.  We see a slight uptrend that started mid-last summer but prices have been contained by the 200 week EMA.  Now we see that prices are selling off and approaching the trend line. 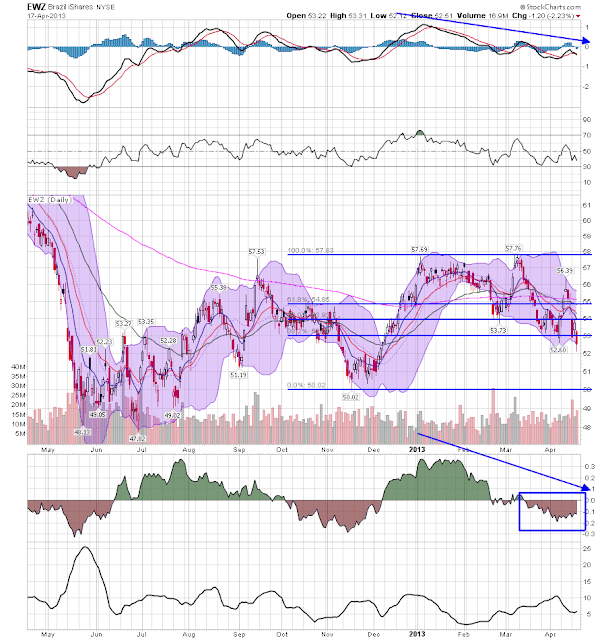 The daily chart shows a very weak technical picture.  Prices are below the 200 day EMA and the shorter EMAs are moving lower.  Prices have also broached the 38.2% Fib level of the mid-November early March levels.  The MACD is declining and negative, while the CMF is showing a negative reading.

This rate increase has signaled to the market that Brazil has some fairly deep problems that need to be dealt with.  I wouldn't go long here until we get a far clearer read on inflation.
Posted by Unknown at 11:00:00 AM