According to the NBER, we're almost four years into this expansion.  That means that, like it or not, we are closer to the next recession simply by definition.  So I think it's time to at least try an figure out what that will look like, simply to get a feel for what might be involved.

Let's start with this: the last recession was atypical and won't provide much much of a blueprint for the next recession.  The "Great Recession" was caused by a financial meltdown literally forcing the entire economy to seize up.  And, the ensuring recovery was greatly slowed by the de-leveraging process at the consumer level.  Now the financial system is in better health as are consumers, so the possibility of a repeat is fairly small.

So -- what would cause the next recession?  Historically there are usually two precursors to an economic slowdown: a hike in interest rates, which is initiated by the Federal Reserve to slow inflation (which is caused by an economy running a near full capacity) and a rise in oil prices.  To illustrate, here's a chart of the effective federal funds rate: 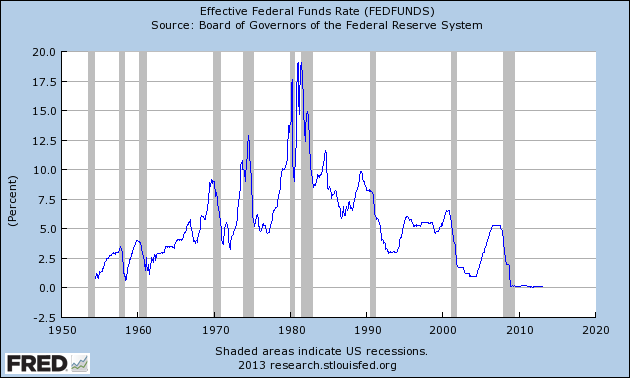 Notice the increase before each of the post WWII recessions.

Regarding oil prices, consider this from Professor James Hamilton:  Ten of the 11 recessions in the United States since World War II have been preceded by an increase in oil prices.

In addition, a contributing factor (or perhaps the primary causation factor) of the last two recessions was the bursting of some type of asset bubble.  First we had the stock market bubble popping in 1999-2000 and then we had the housing bubble popping in 2006-2008.  Currently, there aren't any bubbles to pop, so this won't be a contributing factor either.

The above points lead to an interesting set of questions: given that we're at the zero lower bound for interest rate policy and with the US now producing far more oil thanks to the introduction of "fracking" will we experience an interest rate increase or oil shock anytime soon?  The answer to the first is obviously no: the Fed has publicly stated it will keep rates at current levels until unemployment is lower or inflation is higher than current levels.  The answer to the second is a bit harder to answer, but I do think the most probable answer is that the effects of a potential oil spike have been great ameliorated, barring a political or military situation in the Middle East.  And finally, consider that there currently no asset bubbles to pop, meaning this cause has been taken out of the equation as well.

So, to sum up this post, the traditional causes of a recession stand a low probability of occurring this time around.