ECRI and the stock market: I report, you decide

In its most recent defense, ECRI has sought to downplay the fact that the S&P 500 has been rising to new highs long after the beginning of its alleged recession in July 2012. Most recently this morning in a television interview they claimed that no bear market had ever occurred during the recessions of 1926-27, 1945, and 1980.

To begin with, even under ECRI's own chosen metric, the stock market has appropriately reacted to recessions in 12 of the 15 instances of recession in the last 90 years.

But there are further problems with its analysis. In the first place, by specifying a "bear market" as the metric, they are cherry picking. For, in the 6 month long 1980 recession, the stock market did make a peak less than 45 days in, on February 13, and thereafter fell 17% to a 52 week low in April, before rising again and thus predicting the end of that short recession: 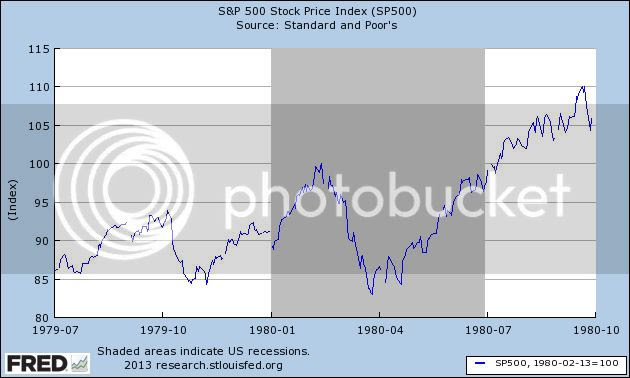 So the 1980 recession performance of the stock market actually supports ECRI's critics, rather than ECRI.

Secondly, the 1945 demobilization recession only lasted 8 months. So the stock market did not rise through a recession that lasted longer than 8 months - where ECRI says we are now - in 1945. That only happened once in the last 90 years - in the 13 month long 1926-27 recession.

So there are 14 instances that either don't support or outright contradict ECRI's claim, to only 1 instance in support.

So which conclusion looks more compelling to you?

While I'm at it, a similar likelihood plays out with regard to nonfarm payrolls, which, according to ECRI, have now risen for 7 straight months into their recession. This length of a continued upturn has only happened exactly 1 time since World War 2 - in 1974. Payrolls turned down at worst only 3 months into each and every other recession.

And the ISM manufacturing index - now over 54 - similarly has only been at this high a level only once in any recession since World War 2 - declining through it in the 1974 recession.

So we either have a recession that is an exception to boatloads of reliable data from other recessions - ECRI's position. Or else no recession started in July in which case ECRI is wrong for the 4th time in the last year and a half about the onset of recession.

I report, you decide.

Update: ECRI just published a piece at their site, claiming that the YoY% growth in employment is recessionary - with a graph going back exactly one year. Just in case you're interested, here is the exact same graph extended back 70 years: 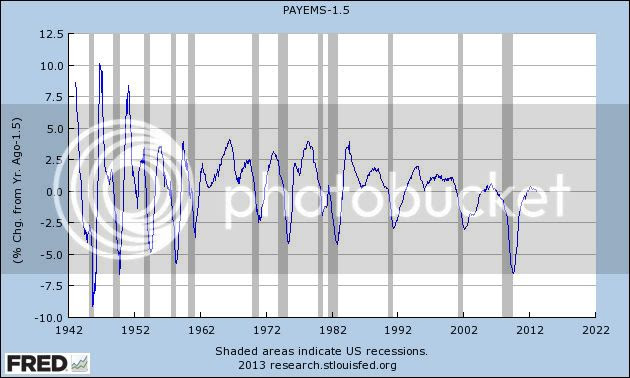