Market Analysis; 2013 Begins With A Whimper

First, it's good to be back.  I hope that everybody had a good holiday.  Let's start the year by looking at the long-term equity charts and comparing those with several treasury and corporate yield charts. 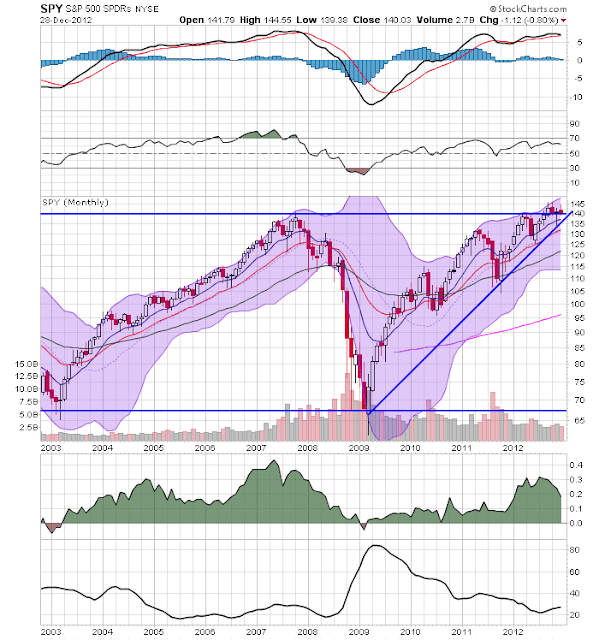 Currently, the market is running into resistance around the 140 level -- which is near the market top from the rally that ended in late 2007.  In addition, while the market has rallied from its 2009 lows.  the rallies have been decreasing in strength and magnitude.  The first ran from 65 to 110, the second from 100 to 130 and the third from 125 to 145.

Also note the momentum has stalled and the CMF -- while strong -- is declining.  Also note the slight uptick in BB width, indicating a possible increase in volatility coming up. 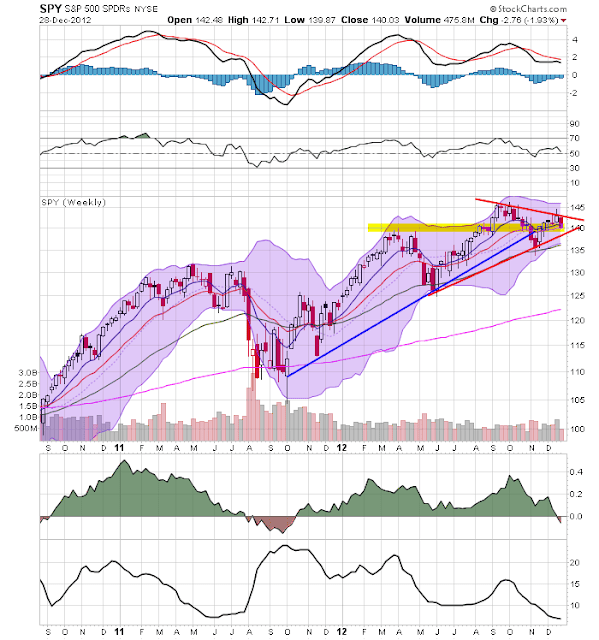 There are several pieces of color-coded information on this weekly chart.  First, notice that 140 provides key technical resistance.  Secondly, the trend line that started in late 2011 has been violated (the blue line).  Third, the red lines indicate prices are consolidating in a symmetrical triangle formation.

So, these two charts tell us that prices have rallied from their 2009 lows, but they are running into resistance at the 140 level -- a level with a very strong historical meaning.  But the rallies that got us here are decreasing in intensity.  However, the bulls can still argue that prices are simply consolidating around the 140 level as they get their economic bearings for the new year.

Let's next turn to the treasury market. 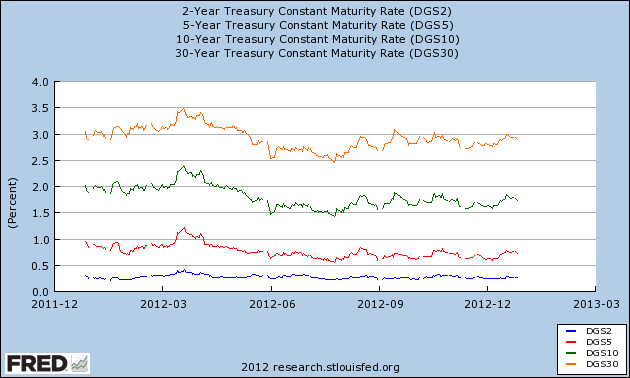 Above is a graph of the yield of the 2, 5, 10 and 30 year CMTs.  One point clearly sticks out on the above chart: for the last half of last year, not much really happened.  Instead of strong trends up or down, we see more or lass horizontal lines that qualify as statistical or trading noise rather than meaningful movements.  In fact, the only real movement in the curve came when prices rallied (and yield fell) starting in either March or April of last year.  Also note the yields are incredibly low -- the 30 years is yielding under 3%.  This tells us that investors are concerned just as much (if not more) with return of capital as return on capital. 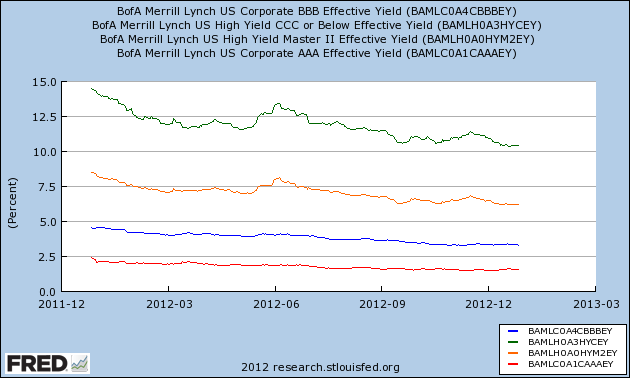 Above shows the AAA, BBB, CCC and high-yield curves from BofA.  Notice that we see strong movement in the junk, CCC and BBB yields, which is better highlighted by the following charts: 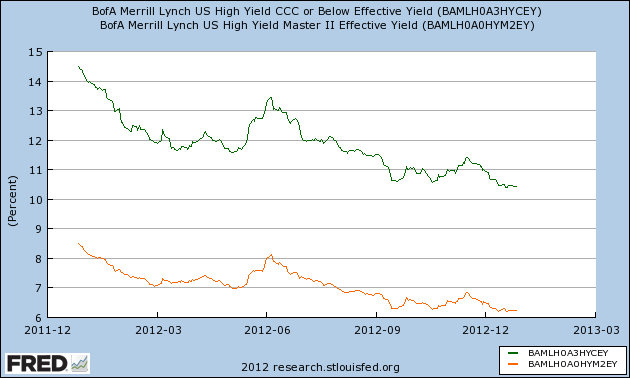 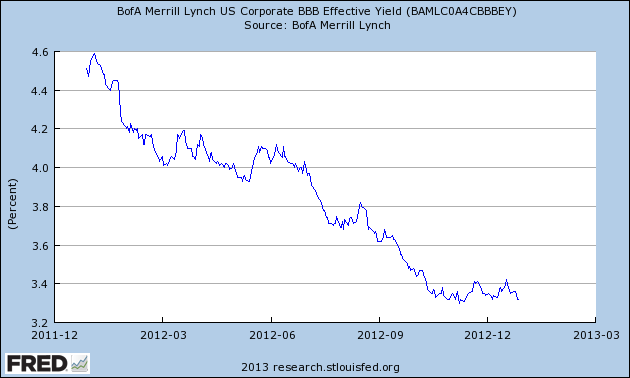 Let's look at the corporate market by breaking it down into maturities: 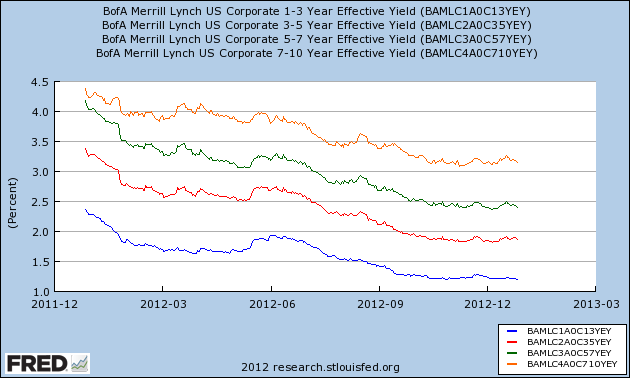 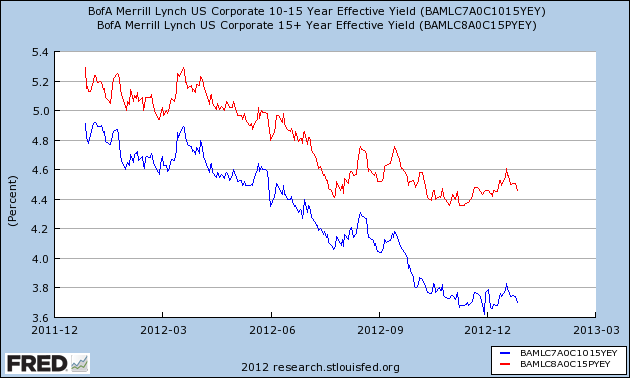 The top chart shows the yield of the shorter BofA corporate credit indexes (1-3 years, 3-5 years, 5-7 years and 7-10 years), while the lower chart shows the longer corporate indexes (10-15 years and 15 plus years).  Notice the entire corporate yield curse has come in over the last year.  On the top chart, various curves have come in between 100 and and 150 basis points.  On the lower chart, yields have come in between 60 and 100 basis points over the last year.

Let's tie all of this information together.

1.) The equity market is at a key technical area.  It has rallied to this point from its 2009 low on three rallies, each of decreasing strength.  Prices have stalled at the 140 level for the last four months.  This is occurring against a weakening momentum picture.

2.) Instead of moving into equities, investors have plowed money into bonds -- both treasury and corporate.  This has led to a lowering of the yield curve across the spectrum.

3.) The fundamental background is weak.  Although it's expanding, the economy is very sensitive to shocks.  Additionally, we now have a debt ceiling negotiation to deal with, which will be contentious, ugly and probably won't solve any problems.

4.) Internationally, we see a great deal of weakness as well.  The only bright spot is a recent rally in the Chinese market.

In short, there is little to think the equity markets can rally strongly at this point, save for a "China will save us all" rally.