A Look Back At Oil's Price Movements

NDD has correctly identified oil as one of our economy's Achilles heels; he refers to it as the oil choke collar.  As such, it's important to understand how oil prices have behaved over the last few years. 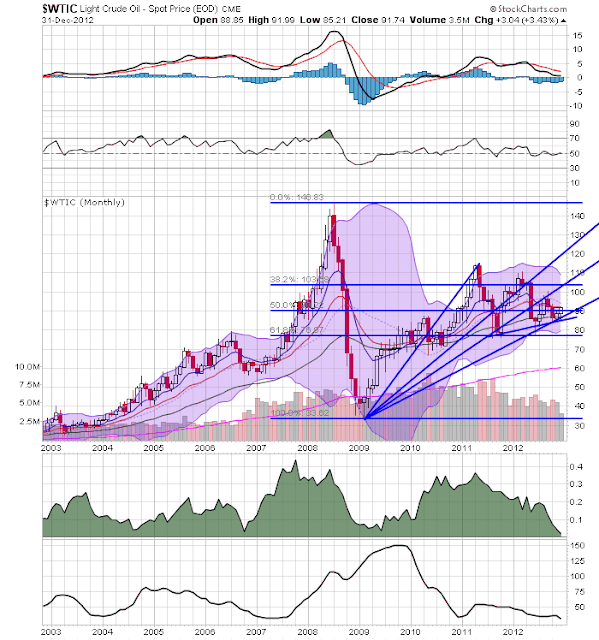 On the monthly chart, we see the oil price spike of 2008 which helped to send the economy into the last recession.  But since then, oil prices have stayed more or less within Fibonacci retracement levels from the 2008-2009 oil sell-off (roughly 76 and 103).  Also note the importance of Fibonacci fans for the last two "rallies" in the oil market.

Looking at the underlying technicals, we see a somewhat weak picture.  First, both the momentum and CMF readings are weakening.   Second, the shorter EMAs are all moving lower.

From the fundamental side, keeping prices from advancing too high is the overall slow world-wide economic situation, as slow-growth equals slower demand growth.  Secondly, the US is producing far more oil, leading to overall increased supplies.  Consider this chart of overall oil supplies from the latest This Week In Petroleum:

As of now, the US is amply supplied. 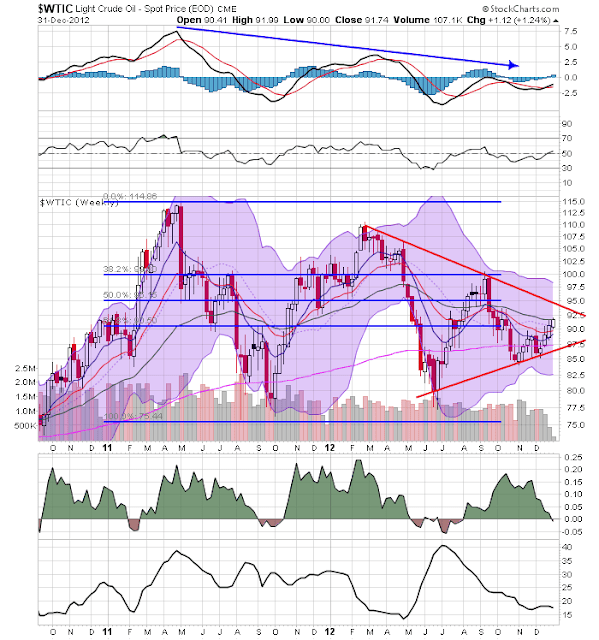 On the weekly chart, pay particular attention to the symmetrical triangle using red lines.  For all of 2012, oil prices consolidated from a high of 107.5 to a low of around 80.  Since then, prices have been narrowing their trading band.  Also note the importance of the 200 week EMA in the above chart; every time prices have moved below this important technical level, they have quickly rebounded.

In addition, momentum is decreasing and the shorter EMAs (10, 20 and 50 week EMAs) -- while positive -- are all moving lower.

In effect, oil is in the middle of a waiting game.