An evaluation: looking back at my 2012 forecast

Back in January i published my 2012 forecast in which I relied upon "The K.I.S.S. method":

Since I'm not a highly paid Wall Street pundit, I simply rely upon the LEI for the short term, and the yield curve for the longer term with the caveat of watching out for deflation. The simple fact is, with one exception, if real M1, and real M2 (less 2.5%), are positive, and the yield curve 12 months ago was positive, the economy has always been in expansion.

The simplest forecast, therefore, is that since the LEI were positive all during 2011, and since both M1 and M2 are positive ... and since the yield curve did not invert at any point in the last year, so long as we don't fall into deflation we should have growth all through 2012.

.... [Further,] all of ECRI's long leading indicators have turned up since last spring, with real M2 and the DJBA making new all time highs....

This, plus the positive yield curve, tells me that for the second half of 2012, the indicators are really in agreement -- there will be growth.

So what do the shorter leading indicators say about the first half of 2012?

.... Ultimately the question as to whether the trend is slightly positive or slightly negative in the first part of 2012 becomes whether housing will show enough actual strength, and whether the Oil choke collar will weaken sufficiently, to support US growth if manufacturing and exports falter.... [M]y best judgment is that we will avoid recession, but that at least one quarter of negative GDP, with the likelihood greater in this quarter than the second quarter, can't be ruled out.

At midyear I updated the forecast, describing it as one falling between Scylla and Charibdid:


I really set myself up for failure in January with my forecast for this year of weakness in the first half,  most likely in the first quarter and probably as bad as 2006 but not quite as bad as the recession of 2001, followed by strength in the second half.  That's a really narrow passage to navigate!

....
Initial strength has been followed by progressive weakness that started with a poor March payrolls report.  I'm still expecting the weakness to end this summer sometime, partly because


Looking back, it appears I was right on the trajectory but wrong on the timing. Judging by the 4 coincident indicators of sales, production, income, and jobs, weakness did begin by the end of the first quarter and continue thereafter, but instead of the economy re-accelerating in the second half, it was late summer and early autumn that waw the weakest numbers. Here's the graph of these four coincident indicators through 2012: 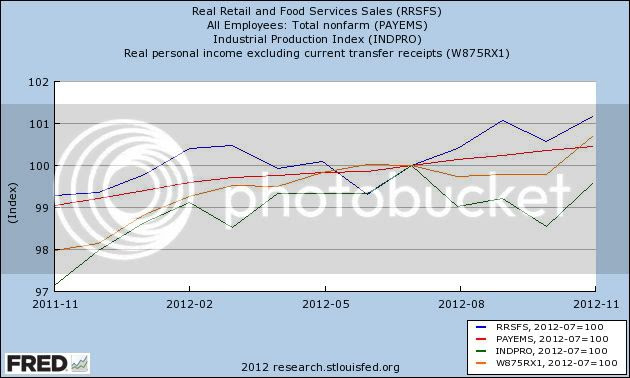 Indeed by early autumn the numbers were indeed worse than 2006 but not quite so bad as 2001, prompting ECRI to see a recession having begun. Three of the four number did make new highs again in November, suggesting that we did indeed avoid recession and a re-acceleration of growth may have begun.

The complete stall in the above numbers in August-October probably has a lot to do with the fact that, instead of declining through that season as it usually does, per my second point above, instead gas prices zoomed right back up their springtime highs again by Labor Day, only afterward declining to their 52 week lows a couple of weeks ago.

By GDP measures through the third quarter, the weak quarter was the second, but interesetingly, 2012 actually as been stronger than 2011: 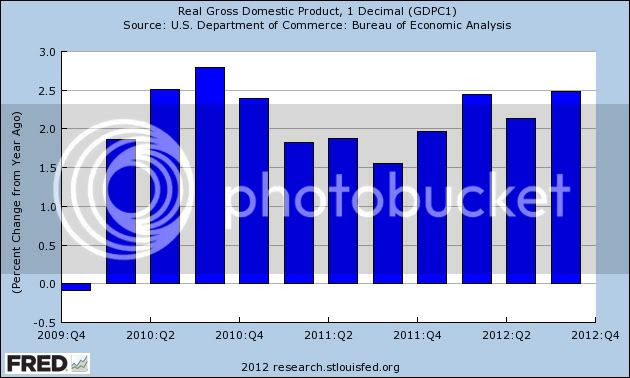 Assuming the 4th quarter gives us reasonably positive GDP, that should be the final confirmation that we escaped recession again in 2012.

I can't let this year in review pass without noting one forecast that I got early and right, namely when I said in summer of 2011 that housing oruces would bottom this past spring:

[H]ousing prices have already "faced the brunt of market forces" without support for a full year, as a result of which they have been falling closer and closer to equilibrium, the rate of decline is abating, and actual real time data shows that nominal if not inflation adjusted stability may indeed be reached as soon as early next year.

Prices did indeed bottom, according to the Case-Shiller index, in March of this year. My forrecast of this bottom was months ahead of others, including Bill McBride's. Not too shabby.

All in all, while the timing may not have been impeccable (due to the unpredictable late summer gas price spike), my 2012 forecasst that steered between Scylla and Charybdis seems to have been on point.

Thanks to all you who read this stuff! I'll have a 2013 forecast sometime in the next few weeks.
Posted by New Deal democrat at 9:00:00 AM