John Cornyn is an Idiot of the Highest Order

From an editorial in the Houston Chronicle:

The biggest fiscal problem in Washington is excessive spending, not insufficient taxation. Tax cuts didn't cause this problem, so tax increases won't solve it. If we don't reduce spending and reform our three biggest entitlement programs - Medicare, Medicaid and Social Security - then we will strangle economic growth, destroy jobs and reduce our standard of living. With the national debt above $16 trillion, and with more than $100 trillion in unfunded liabilities hanging over us, our toughest fiscal decisions cannot be postponed any longer.

Republicans are more determined than ever to implement the spending cuts and structural entitlement reforms that are needed to secure the long-term fiscal integrity of our country.

The coming deadlines will be the next flashpoints in our ongoing fight to bring fiscal sanity to Washington. It may be necessary to partially shut down the government in order to secure the long-term fiscal well being of our country, rather than plod along the path of Greece, Italy and Spain. President Obama needs to take note of this reality and put forward a plan to avoid it immediately.

Let's start by looking at a history of the deficit: 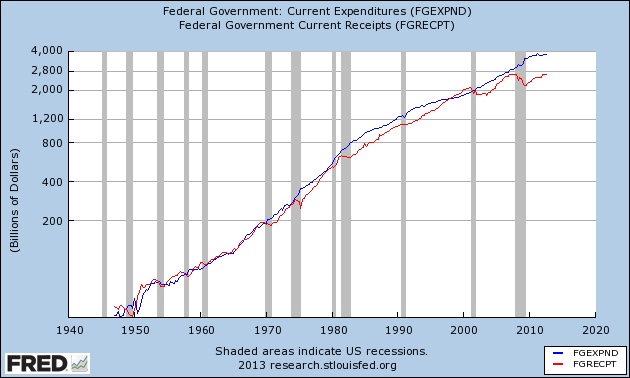 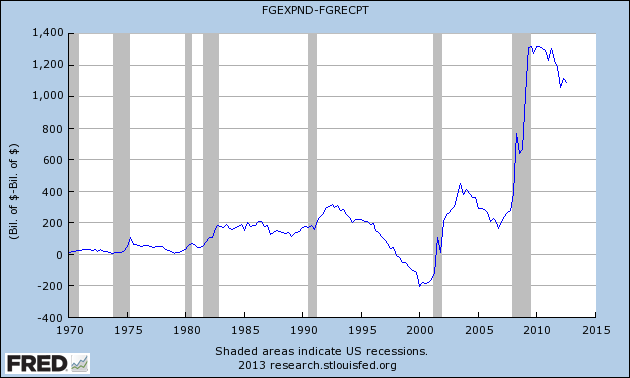 Let's start with the above two charts.  The top chart shows federal receipts and expenditures in logarithmic scale, while the bottom chart shows the difference in absolute dollar terms.  Several points stand out.

1.) We started to see larger deficits starting in the early 1980s -- the time of the beginning of the "great moderation" and the country's implementation of supply side economic doctrine.

2.) After two recessions -- those occurring in the early 1990s and early 2000s -- we see deficits increase right after the end of the recession and decrease as the economy expands.  The jury is still out regarding this recession.  While there has been a drop, it hasn't been that big yet.  This tells us that either we see strong enough economic growth after the recession to lower it, meaningful policy action in Washington or some combination of the two.

3.) After both the 1980s recession and the early 2000s recession, the budget never returned to surplus -- which it did occur after the early 1990s recession. 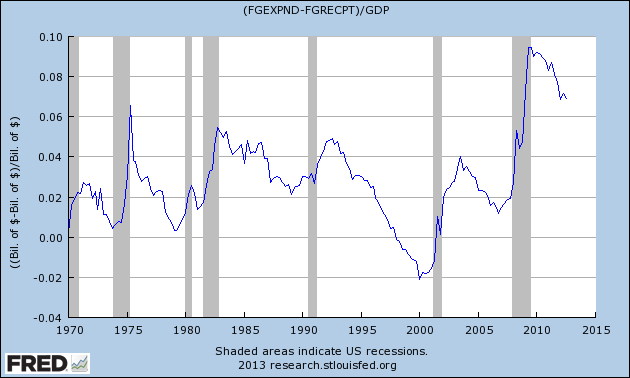 The above chart places the deficits and surpluses in GDP perspective,  converting the dollar amount of the deficit to a percent of nominal GDP.  While the dollar amount appears to increase in the logarithmic chart (the top chart), the chart above shows that a deficit of between 3%-6% of GDP post recession was normal coming out of recession starting in the mid-1970s.  In addition, our current budget deficit is decreasing as well, moving from about 9%/GDP to 7%/GDP over the last four years.  While this percentage is higher than the other post-recession events, the last recession was extreme. 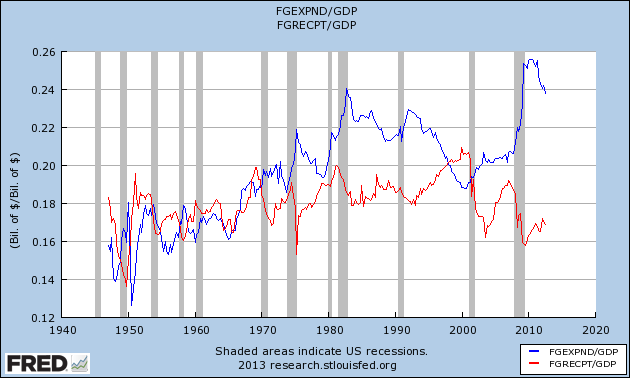 The above chart shows federal expenditures and receipts as a percent of GDP -- the same information as the preceding chart, but showing both data sets.  Again a few points stand out.

1.) The budget expenditures during the "great moderation" show expenditures being consistently higher than receipts.

2.) Our current situation is very much out of the statistical norm.

3.) The current situation is as much a product of the recession and the associated government spending stabilizers accompanying that event as entitlement spending problems.

Let's add up all this information.

1.) The deficit has been built up over a long period of time -- starting in 1980 and the implementation of supply side doctrine.  At that time, government spending increased and taxation decreased.

2.) There has been a long history of actual neglect of the deficit issue.  In fact, a strong argument could be made that Republicans could care less about the deficit when a Republican president is in the Oval Office.

3.) A strong argument could be made that a large percentage of our current problems are related to governmental stabilization payments to alleviate the effects of the recession.  The decrease in the deficit/GDP ration indicates that a period of stronger prolonged growth would have just the effect Cornyn is talking about.

All that being said, consider that according to the BEA, total GDP is currently at $15.8 billion and total federal debt is at $16.4 trillion, meaning the debt/GDP ratio of 103% -- hardly a fatal level.

Now -- let me address Senator Cornyn's statement that a partial shutdown of the federal government may be necessary.

First, considering that the government spending is a component of GDP, lowering government spending would lower GDP.  There is also standard IS/LM analysis, which would draw the same conclusion (the LM curve would shift to the left, lowering national income).  And then there's a new paper from the IMF which says austerity cuts economic growth.  And that's before we get to how much damage a shutdown would cause to the financial markets if and when it occurs.

In short -- a temporary shutdown of the US government would be a really stupid and probably recession causing event.