Bonddad's 2013 Economic Predictions: A Really Weak 2013 Is In Store

First, I actually hate the idea of making predictions, largely because there are simply way too many variables to consider in an economy as large as the US'.  So, I'm not going to make any targeted statement (the S&P500 will be at X level).  Instead, I want to highlight some trends that I think will either continue or emerge in the coming year.

I've written in some detail about this is over the last few weeks: see here and here

1.) Housing will continue to rebound.  Inventory of both new and existing homes are both at far more realistic levels and the Fed is driving down interest rates with its MBS program.  Housing affordability is at levels not seen in a very long time and builder confidence is rising.  Put all of these factors together and it appears that housing should remain on the comeback trail for most of next year.

2.) Inflation will remain contained.  There is far too much demand slack in the economy for there to be any demand pull inflation, and there is far too much slack in capacity utilization for there to be any supply push inflation.  While a commodity price spike of some sort is actually fairly likely, producers will absorb the increase in the conversion from raw to finished goods.

3.) US wages will continue to perform poorly.  Consider the following two charts: 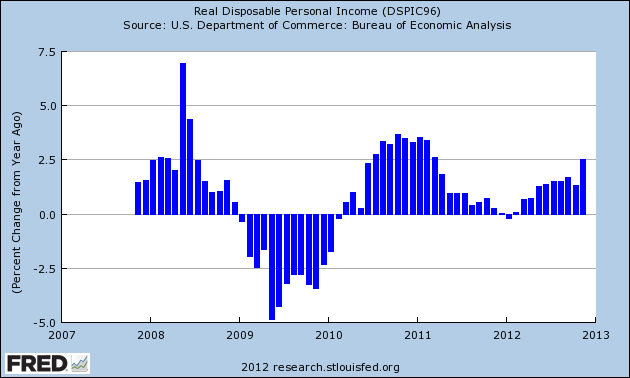 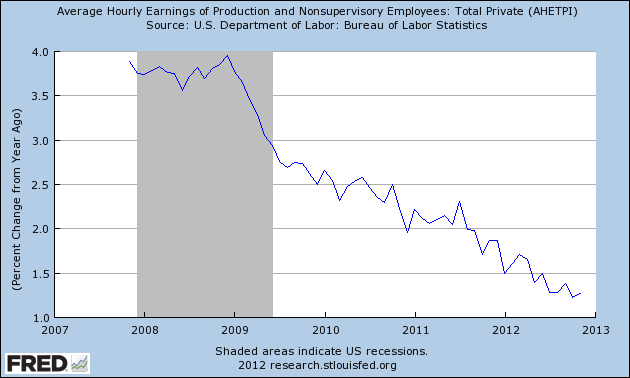 The bottom line is wages will have lackluster growth for most of 2013.

4.) Washington will continue to provide a great deal of confusion for anyone trying to get a clear or even muddled vision of policy -- a fact which is entirely the Republican's fault.  From their clear denial of factual evidence (denial of evolution, denial of global warming, and their suppression of any evidence that contradicts their opinions), to the fact that a major conservative group nearly had an armed coup, to Speaker Boehner's complete inability to deliver a meaningful voting majority, the Republicans are bat shit insane.  They should not be listened to at all.

Quick update: I wrote this last weekend.  The fiscal cliff situation and the complete disregard for Sandy victims is literally icing on the cake, demonstrating just how completely out to lunch the Republicans are.

5.) Internationally, the BRIC story will continue to fade.  Brazil, Russia, India and China will continue to fall from the headlines as they each grapple with their own respective issues.  Brazil and Russia will deal with the effects of a slowing world economy and the inherent slowdown in commodity demand associated with same.  India has a terrible combination of high inflation and a stifling bureaucracy to deal with.  China has a new leadership in place and is working at changing the composition of its economy to a more demand driven model.

6.) We start the year with three major economies in recession -- Japan, the UK and the EU.  That means that for at least the first half of 2013, there is little possibility of these regions generating meaningful growth.  In addition, it's highly likely they will slow down other regions as there will be lower trade going into any of these countries/regions.  Hence, the opening analysis of the world's overall situation is not encouraging.

7.) There is the possibility that the second half of the year will have stronger international growth.  However, I doubt we'll see anything except a weak, meandering rate of expansion from Japan, the UK or the EU.  Japan is in its fifth recession in 15 years; the UK hasn't meaningfully grown since 2008 and the EU is currently sinking further into recession.  None of these fact patterns points to anything except substandard growth for the coming year.

In short, as we exit 2012, we can pretty much assume that 2013 will look an awful lot like the year we're leaving -- painfully slow growth with the possibility of strong, downward shocks negatively impacting the issue.