The fiscal cliff vs. the entitlement cliff


With respect to the "fiscal cliff", ... no deal means that the long-run finances of the U.S. government are automatically rebalanced and the tax system becomes more progressive--major wins--at the cost of some risk of a small recession in 2013--a significant loss, but not an overwhelming one given the long-run stakes.

The source for DeLong's "small recession" remark is this study [pdf] by the Congressional Budget Office showing that the tax hikes and automatic spending cuts making up the "fiscal cliff" will cause the U.S. economy to contract at an annual rate of 1.3% for the first half of 2013, and the unemplpoyemtn rate would rise to about 91%. However, economic growth would resume in the second half of the year to 2.3%.

In order to avoid this mild recession lasting 1/2 a year, we are told that Social Security and Medicare must sustaain permanent cuts that won't address the underlying problem of soaring medical costs at all, but will cut real benefits to older Americans who have paid into the system for their entire lives by 20% or even more, forever.

A visual aid may help clarify. The recession that would be caused by going over the fiscal cliff is like this: 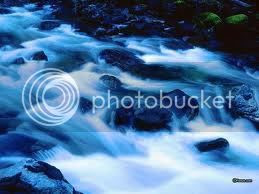 The permanent cuts to social insurance programs, into which generations have paid payroll taxes throughout their entire lives,made by a "grand bargain" will be like this: 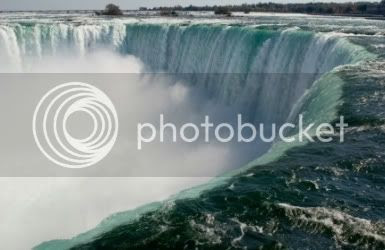 In other words, we are being told that we have to go over the second cataract in order to avoid going over the first one. The choice is pretty obvious.

For the record, the Northwest Plan by Bruce Webb and Dale Coberly shows that the shortfall in Social Security benefits several decades from now can be entirely cured by an increase of a few tenths of a percent in the payroll withholding tax. Medicare is actually much more efficient than private medical insurance. The problem with Medicare is soaring medical costs, not the aging of the Boomers.
Posted by New Deal democrat at 2:00:00 PM