The UK economy has barely grown over the past two years, as it has laboured against the consequences of the financial crisis and its impact on global demand, a sharp squeeze in domestic spending power and a necessary fiscal consolidation. The period of weak demand has been accompanied by stagnant productivity, raising questions about the extent to which the supply capacity of the economy has expanded. Increases in energy and other import prices and in VAT have meant that CPI inflation has been well above its 2% target for much of this period.

There is simply so good news in that paragraph.  The economy is at a standstill, demand is weak, productivity is stagnant and prices are at uncomfortable levels, preventing the central bank from doing anything else. 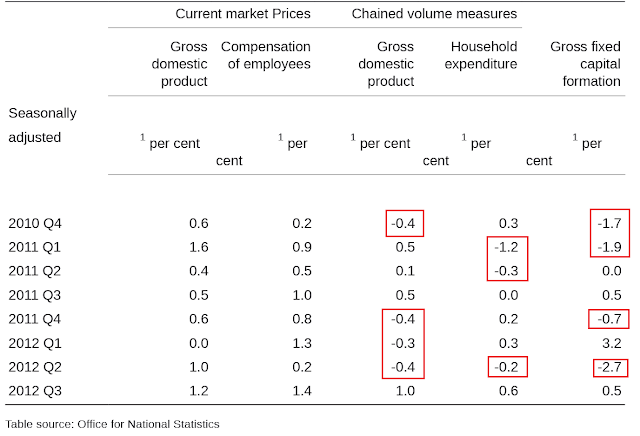 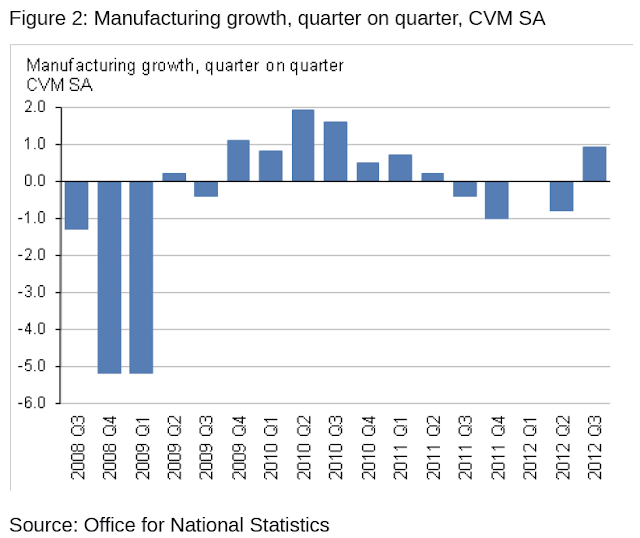 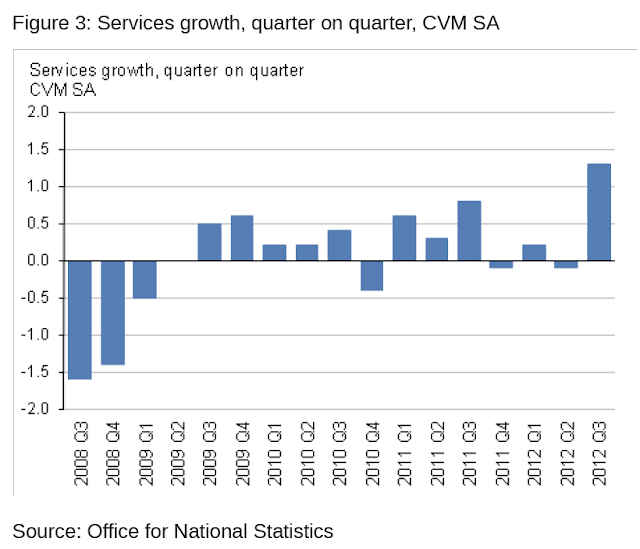 The two charts above break the economy down into manufacturing and service sectors.  Manufacturing either contracted or didn't grow in four of the last six quarters.  We did see a nice bump in the last quarter.  Service sector growth is a bit better.  In 4Q11-2Q12 the sector contracted, which is to be expected considering the economy was in a recession.  The sector did see a nice bump last quarter.

Here's the same information put into a "100" scale from the latest inflation report: 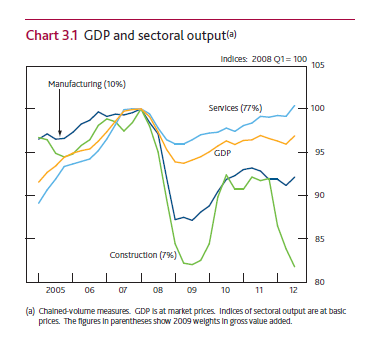 The big problem with the above numbers is that in the 3Q of this year, the UK had the Olympics and Paraolympics, both of which boosted demand.  As the latest GDP report indicates:

The second estimate of GDP for the third quarter of 2012 was unrevised from the previously published 1.0 per cent increase in the preliminary estimate of GDP, despite small revisions within the production and service industries. Downward revisions of 0.1 percentage points to manufacturing and construction were offset by a 0.6 percentage point upward revision to mining & quarrying including oil & gas extraction. Despite these revisions the picture remains broadly unchanged, with output indicators suggesting weak growth bolstered by special factors such as the Olympic and Paralympic Games.

Now, let's turn our attention to a few charts from the BOE's Inflation Report -- which is akin to the Fed's Beige Book: 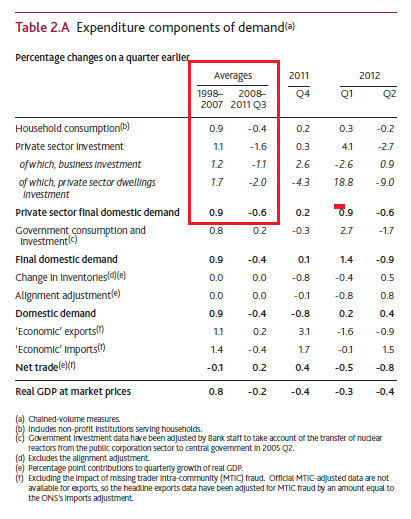 The above chart shows various GDP components and compares their post recession performance to their performance over the 1998-2008 time period.  The results are devastatingly negative.  Previously, household consumption increased .9% Q/Q, but is now contracting .4% Q/Q.  Private sector investment was increasing 1.1%, now it's decreasing 1.6%.  Private sector final demand was increasing .9% Q/Q now its decreasing .6% Q/Q.  Simply put, these are terrible numbers. 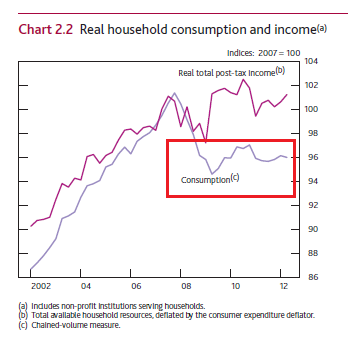 Household consumption has been consistent since the Great Recession -- but there is no improvement.  The good news to this is that savings has increased, but right now the economy needs spending. 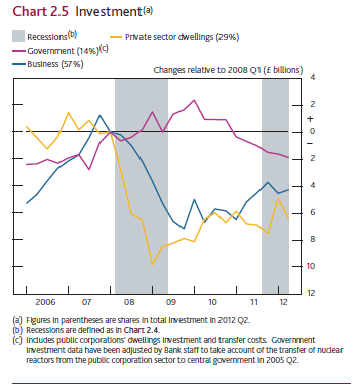 And the chart above shows that overall investment -- government, business and private sector dwellings -- are all far below pre-recession levels.

Put simply, the UK economy is in terrible shape.  It hasn't meaningfully grown since 2008.  And, their plan of austerity is clearly hurting their efforts to move beyond.
Posted by Unknown at 10:00:00 AM